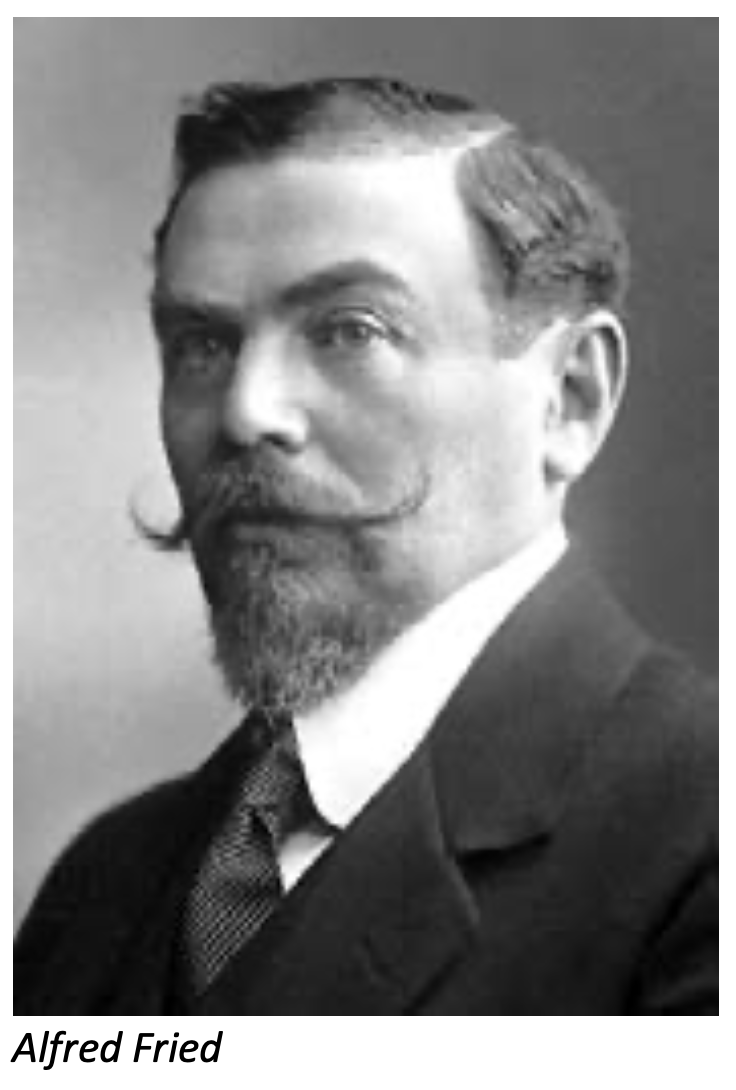 The existence of centers, courses, conferences as well as journals, manuals, and other publications dedicated to peace journalism would have been greatly welcomed by Alfred Hermann Fried (1864-1921). He would certainly have recognized the urgent need for this kind of journalism today. The Austrian was the first journalist to be awarded the Nobel Peace Prize (1911). Today, many journalists have been persecuted for their pursuit of peace, truth, and justice.

Born in Vienna, Fried started out as a bookseller and publisher in Berlin before he became an active and leading member of the organized internation- al peace movement that emerged following the publication of Bertha von Suttner’s bestselling anti-war novel, Lay Down Your Arms! (1889). During the last decade of the 19th century, Fried published a small but impor- tant peace monthly that von Suttner edited. In 1899 it was replaced by Die Friedens-Warte (The Peace Watch) which Fried edited until his death.

The chairman of the Norwegian Nobel Committee called it ‘the best journal in the peace movement, with excellent leading articles and news of topical international problems.’ Among its many distinguished contributors were academics from a wide range of disciplines (especially scholars of international law), activists, and politicians.

In all of his many writings, Fried always reported and analysed the political issues of the day in a way which focussed on the need and possibility for calming inflamed sentiments and preventing violent conflict (as did von Suttner, the first female political journalist in the German language). They consistently and practically promoted an enlightened, cooperative and con- structive approach.

Fried was a most gifted and prolific author who was equally active as a journalist, editor, and author of books, both popular and scholarly, on such related subjects as the peace movement, international organization, and international law. His proficiency as a journalist is shown by a volume that he published in 1908 with details of 1,000 of his newspaper articles on the peace movement. He clearly set himself apart from the mainstream journalism of his day – with its nefarious stoking of fear, hatred, and suspicion among countries – by referring to him- self as a peace journalist. ‘Under the White Flag!’, a book that he published in Berlin in 1901, consisted of a selection of his articles and essays and was subtitled ‘From the files of a peace journalist’ (Friedensjournalist).

In an introductory essay on the press and the peace movement, he criticised how the latter was neglected or ridiculed. But its steady growth and influence, including the gradual adoption of the movement’s agenda (notably the use of arbitration) by states to settle their conflicts, made him believe that a major change in public opinion was imminent. Other factors contributing to this historic shift were the growing realization of the burden and dangers of an armed peace, and the costly and devastating wars in Cuba, South Africa and China. Fried correctly argued that wars were made possible, indeed inevitable, because of the anarchy that characterized international relations. His motto – ‘Organize the World!’ – was a precondition before disarmament (as expressed in Bertha von Suttner’s ‘Lay Down Your Arms!’) would become a realistic possibility.

Although he devoted much time and energy editing several peace movement journals, Fried realised that they reached only a relatively small audience and that ‘preaching to the converted’ was ineffective. The real campaign had to be waged in and through the mainstream press.

The need for peace journalism is greater than ever, also because the consequences of violent conflict and war are so much more catastrophic than a century ago. The organization and institutionalization of peace journalism at the start of the 21st century is therefore greatly to be welcomed. Fried had attempted something similar at the start of the 20th century when he took the initiative for the creation of an International Union of the Peace Press. Despite his best efforts, it remained embryonic and when peace journalism was revived in the after- math of two world wars, his pioneering efforts had largely been forgotten.

Even in his native Austria, the Nobel Peace Laureate had been ‘suppressed and forgotten’ – the title of the first biography of Fried, published in 2006.

Peter van den Dungen was a lecturer/visiting lecturer in peace studies at the University of Bradford,
UK (1976-2015). A peace historian, he is honorary general coordinator of the International Network of Museums for Peace (INMP).