A Portrait of the CIA in Prison 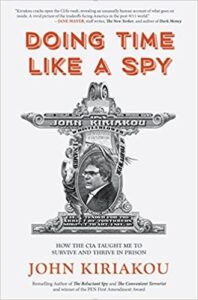 John Kiriakou’s Doing Time Like a Spy: How the CIA Taught Me to Survive and Thrive in Prison paints a disturbing portrait of a U.S. prison in which Kiriakou spent time as retribution for having admitted that the CIA used torture. His ongoing whistleblowing on the state of U.S. prisons, as well as on the ways in which the U.S. government has gone after him, is as valuable as his opposition to CIA torture.

The prison as described in the book is largely unaccountable to the rule of law. Prisoners in need of medical attention are simply allowed to die, or hastened along toward death by sadistic or incompetent malpractice. Education for prisoners is nonexistent. Rehabilitation efforts are nonexistent. Slave labor is universal. Those who leave, leave having acquired additional skills and attitudes of criminals. This prison system serves not to protect, not to rehabilitate, not to compensate or make restitution, and not to reduce crime.

Kiriakou also paints what I find a disturbing portrait of himself. In his view, prison requires vicious and manipulative behavior to survive. Perhaps it does. And perhaps it is an act of significantly brave honesty for Kiriakou to show himself to us degraded by such behavior. Perhaps it is all the more so to the extent that he depicts himself enjoying it. Yet he describes his prison-survival techniques as having come straight out of his CIA work, which he engaged in for years and about which he claims unmitigated pride. In addition, Kiriakou describes his approach to writing and publishing as self-serving and manipulative, and repeatedly urges us to never trust anyone, all of which leaves one wondering.

Kiriakou is proud of having volunteered to fight in the War on Terror. His view of foreign policy, as his view of prison conduct, seems to condone killing, but not torturing. His prison skills include threatening various people with murder, but never torture. That neither murder nor torture is legal or moral, and that neither “works” on its own terms, is a blind spot in U.S. culture, not something unique to John Kiriakou.

Kiriakou claims that threatening to kill one fellow prisoner scared him into ceasing to slander Kiriakou, except for on one occasion when Kiriakou was present and the other prisoner unaware of it. But it could be the man was scared into slandering Kiriakou only when he wasn’t around, which was exactly what he’d been doing to begin with.

Anyway, it’s hard to find morality in the killing / torturing distinction. Maybe that’s the point. All is gray. Kiriakou writes that in his CIA work he didn’t mind “bending some rules,” just not the one on torture. And his prison conduct continually echoes the behavior of the government he is trying to reform.

When Kiriakou asked Senator John Kerry, for whom he had worked, to ask President Obama to commute his sentence, Kerry’s reply was “Do not ever attempt to contact me again.” When a fellow prisoner revealed to Kiriakou that he was a pedophile, Kiriakou’s reply was “Don’t ever try to speak to me again. Never. Understand?”

When the CIA proposed to in-source and escalate the use of torture, Cofer Black described what happened as “the gloves came off.” When Kiriakou wanted to escalate his attacks on a fellow prisoner, he says “it was time to take the gloves off.”

Kiriakou describes Middle Eastern countries he “served” in as “dumps.” He describes prisoners as “the scum of society,” “filthy pig,” “white trash,” “filthy midget rat,” and similar dehumanizing terms. But when Kiriakou explains why his CIA background came in so handy in prison, he refers to conflict among CIA employees, not between the CIA and foreign “enemies”:

That may very well be true. But was it always true in each of the examples related in the book? When Kiriakou frames a fellow prisoner for a charge of attempted escape, it’s because the prisoner is seriously annoying. “Desperate times call for desperate measures,” Kiriakou writes, but desperation is an emotion, not an analysis of the seriousness of a threat. The punishment Kiriakou earns the man he frames is solitary confinement for months — something that much of the world considers torture. Likewise, when Kiriakou writes that he loathed all child molesters in prison, that’s an emotion, not a survival technique.

One of the survival rules that Kiriakou borrows straight from U.S. foreign policy is: “If stability is not to your benefit, chaos is your friend.” This is working out oh so well in Afghanistan, Iraq, Libya, Yemen, Syria, et cetera. Kiriakou seems to model the same approach in prison. He confronts a prisoner named Schaeffer over his having lied about not being a child molester. When Schaeffer responds by spreading lies about Kiriakou, Kiriakou acts as if this were the first sign of trouble, as if he’d previously been uninvolved. This is the same worldview that must dominate CIA thinking in which presumably blowback does not exist. “Afghanistan? Where’s that? Saddam, who? Never met the man!” Later, as things escalate between Kiriakou and Schaeffer, the “time to take the gloves off” arrives, framed as defense against irrational and inexplicable aggression. “Why do they hate us?”

Maybe it was inexplicable. One could hardly get through a prison sentence without encountering irrational aggression — short of doing time in a civilized prison in Norway or someplace. But is it always unavoidable? It seems in Kiriakou’s account to often be enjoyable. Kiriakou writes: “Sometimes there is real satisfaction in passive-aggression.” “Sweet revenge.” “I just wanted to see the guy lying in a pool of his own blood.” Etc.

Torture is different: “At the CIA, employees are trained to believe that nearly every moral issue is a shade of gray. But this is simply not true. Some issues are black and white — and torture is one of them,” writes Kiriakou. Under great pressure in prison, of a sort I’ve never faced, Kiriakou never writes that he had to repress any urge to torture anyone, only to murder them.

What are we to make of an account of the brutality of prison by someone who claims to have survived it by mastering its brutality, yet seems to have taken pride in that and to have learned his brutality working on secret operations we aren’t supposed to know about for a government that is supposed to somehow represent us? It’s very hard to say.

One technique Kiriakou recommends for eliciting information is stating something false in order to be corrected. Yet he notes that in prison this often fails, because you can say the craziest things and people will simply nod. Kiriakou’s next paragraph includes this:

“Near the end of my sentence, Russia sent troops into Ukraine and captured the Crimean Peninsula.”

Is the author trying his techniques on us in print? I don’t know, but I do know that most readers in the United States will simply nod.