The Jeffrey Sterling trial is a bit disheartening for anyone who’d rather humanity paid a bit of attention to avoiding nuclear apocalypse, even though Sterling exposed the CIA’s crime to Congress, and Sterling or someone else (at least 90 people could have done it) exposed the crime to an author who put it in a book and would have put it in the New York Times if, you know, it weren’t the New York Times (the paper obeyed Condoleezza Rice’s demand for censorship).

The last time a whistleblower defendant faced prosecution in civilian U.S. court for “espionage” it was Dan Ellsberg, and the New York Times was a radically different beast.

Here’s a report from Ray McGovern on Thursday’s appearance by Condoleezza Rice in the Sterling trial:

“It was surreal in court earlier today; stiletto-heeled Rice prancing in within 2 feet of me, as if on the modeling runway, with a Paula Broadwell-type look on her face — and, at the same time, Bill Harlow sitting down next to me after his testimony explaining how hard he had tried to get Jim Risen to listen to reason and not pursue/publish the story about the botched CIA ‘Merlin’ operation…..and how listening to Rice’s request at the White House meeting, NY Times Washington Bureau Chief Jill Abramson felt ‘out of her pay-grade range,’ and how her NYT masters (surprise, surprise) bowed to the White House/CIA hyperbole re the dangers of publishing, and agreed to the urgent demand/request of Rice and her boss.  (Pls see my piece yesterday on pitfalls of letting covert action eager beavers loose on the basis of a false major premise i. e., that Iran was working on a nuclear weapon.)

“(As for Abramson, for being a good girl, she made it to the very top of NYT as Executive Editor, for services performed — she was also Washington Bureau Chief when Judith Miller was plying her wares with the likes of Ahmed Chalabi.  But then Jill forgot her place; got too uppity and was unceremoniously dumped by the top men of that ‘all-the-news-that’s-allowed-by-the-White House-to-print’ exclusive club of male chauvinist cowards.)

“Back to the courtroom:  All at once I find myself wondering what might be the appropriate reaction when an amateur Goebbels (Harlow) sits down next to you; so I wrote a little note to him.  (It did not seem to phase him one bit, so I’m sure he would not mind me sharing it with you):

“All stand; judge and jury leave; and I’m not sure he has read the note.  I give it to him; he reads it, smiles, ‘Good to see you Ray!’

Back to the disheartening nature of what Sterling or someone else let us know about:

Either the CIA went on completely mindless autopilot — as everyone but I seems to believe — or it tried to plant evidence of a nuclear weapons program on Iran. That is to say, it illegally proliferated nuclear weapons technology, presented Iran with an obvious fraud, risked serious hostility with Russia, and had zero chance of fulfilling its stated mission of slowing down an Iranian weapons program, should one have existed, and had zero chance of learning what Iran was doing. Stuffing nuke plans under a door in Vienna doesn’t tell anyone what Iran is doing. Handing Iran nuke plans (or constructed nuke parts, as was contemplated) doesn’t slow down a nonexistent program or even an existing one — not even when obvious flaws are inserted in the plans. The CIA’s Russian-American front man spotted flaws immediately. The CIA’s own “red team” spotted flaws, fixed them, and built a working part from the plans in a matter of months. So, again, either this was just a crazed desire to do something, anything, serving no possible purpose and risking advancing the destruction of the planet, or somebody had in mind that it would be advantageous to plant nuke plans on Iran. After all, the Iranians weren’t going to believe that Russian plans were written in American English. But Americans might conceivably believe that Iran would have nuke plans written in English, as they were asked to believe of Iraq as well. Foreigners speak English in American movies all the time, after all.

Maybe I shouldn’t hunt for scraps of intelligence in “intelligence” operations.

But I can find them elsewhere.

The United States doesn’t just write up Russian plans for nuclear weapons parts and spread them around the globe. It also manufactures U.S. versions of the same parts. It does so in Kansas City. And the good people of Kansas City protest it. And a judge has just declared a protester “not-guilty” of any crime — the first time that’s happened in some 120 protests. May the jury holding Jeffrey Sterling’s fate in its hands take heed:

From the Nuclear Resister: 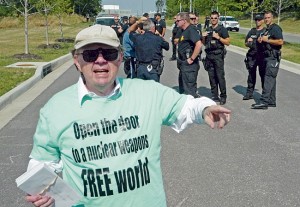 After a 90 minute trial on January 16, 2015, at the Kansas City, Missouri Municipal Court, Judge Elena Franco found that the City had failed to prove that Henry Stoever had the “mens rea” (guilty intent, criminal mind) for conviction of trespass. Judge Franco also found that the City witness had failed to prove where the property line was located at the new Honeywell nuclear weapons production, procurement and assembly plant in southern Kansas City, Missouri. This plant makes, procures and assembles 85% of the non-nuclear parts of a nuclear weapon. Early in the trial, Henry had played the video for the judge that showed him and two companions crossing the line.

When Judge Franco declared Henry “not guilty,” the 31 members in the audience burst into applause. Henry shook the hands of Judge Franco, the City Prosecutor, and the complaining witness, and then visited with supporters outside the courtroom, wiping back tears of joy.

In this case, Henry had filed with the Court and with the Prosecutor a 12-page Pre-trial Notice of Defenses, Brief and Motion in Limine, where he set forth a number of “claim of right” points for taking his action on August 22, 2014, to cross the supposed line at the weapons plant. In his closing statement, Henry quoted a dissenting opinion from Supreme Court Justices Douglas, Brennan, and Fortas in 1966, in Adderley vs. Florida: “We do violence to the First Amendment when we permit this ‘petition for redress of grievances’ to be turned into a trespass action.”

Henry was surprised at the not guilty finding, for the Judge said you may feel disappointed by my finding (because it was based on a technicality … and earlier, Henry had said he didn’t want to quibble over whether the line was a true property line, and that if the line were 20-30 feet farther onto the property, Henry would have gone there). Also, about two years ago, Henry had invited Franco to find him guilty so he could appeal his case to State Court (but that case was dismissed without going to a jury trial). In truth, the Judge today was not convinced Henry committed a crime—bravo! Bravissimo!

The entire Stoever family is celebrating. Many, many thanks to all who’ve risked arrest, to all who’ve supported our now about 120 individual instances of a person crossing the line, to all who’ve sent well-wishes! This is the first in the 120 instances in which a judge saw fit to say, “not guilty!”