New Patterns of Conflict and the Weakness of Peace Movements 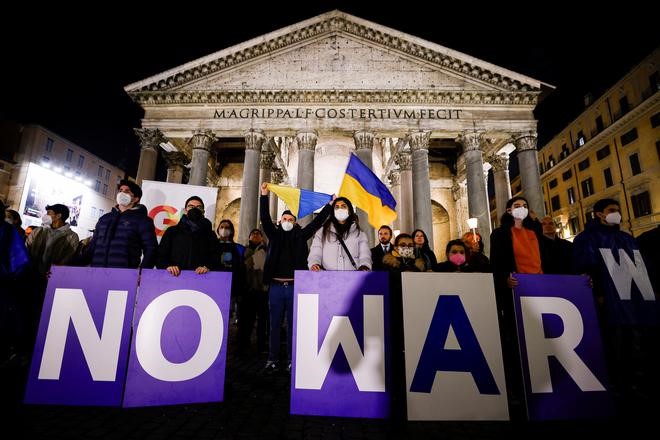 The beginning of the Russo-Ukrainian war in February 2022 dramatized a transition already underway to a new and highly dangerous period of global conflict. The war itself was mainly a Western affair, of primary interest to the immediate parties and the Ukrainians’ European and North American suppliers. But it erupted in the context of a rapidly deteriorating relationship between the United States, which continues to claim global hegemony, and its former Cold War adversaries, Russia and China. As a result, a regional conflict that might have been resolved either by conventional negotiation or problem-solving dialogues between the immediate parties became relatively intractable, with no immediate solutions in sight.

Temporarily, at least, the struggle between Russia and Ukraine solidified the relationship between the United States and Europe, while reinforcing the U.S.’s dominant role in that “partnership.” While the parties to what some termed a “new Cold War” increased their military spending and ideological fervor, other aspirants to Great Power status such as Turkey, India, Iran, and Japan maneuvered for temporary advantage. Meanwhile, the Ukraine war began to assume the status of a “frozen conflict,” with Russia succeeding in occupying most of the restive, Russian-speaking Donbas region, while the U.S. poured billions of dollars in high-tech weaponry, intelligence, and training into the Kiev regime’s armory.

As often happens, the emergence of new patterns of conflict caught analysts by surprise, their theoretical equipment having been designed to explain earlier forms of struggle.  As a result, the changed environment was not well understood and conflict resolution efforts were virtually nonexistent.  With regard to the Ukraine war, for example, the conventional wisdom was that a “mutually hurting stalemate,” with neither party able to win a total victory but with each side suffering greatly, would render this sort of conflict “ripe for resolution” via negotiation. (see I. William Zartman, Ripeness Promoting Strategies). But there were two problems with this formulation:

Moreover, contrary to Western propaganda, with a few tragic exceptions Russia did not undertake large-scale indiscriminate attacks on the civilian population of Ukraine, nor did the Ukrainians launch many attacks on targets outside the Donbas. This relative restraint on both sides (not to understate the horror caused by thousands of unnecessary deaths) appears to have reduced the massive “hurt” needed to produce a “mutually hurting stalemate.” This movement toward what might be called “partial warfare” can be seen as a feature of the military transformation that began in the U.S. following the Vietnam War with the replacement of conscripted soldiers by “volunteers” and the replacement of ground troops by high-tech air, artillery, and naval weapons. Ironically, limiting the intolerable suffering caused by war has opened the door to partial warfare as a tolerable, potentially permanent feature of Great Power foreign policy.

This second theoretical deficiency has proved even more costly to the cause of peace than the misunderstanding of partial warfare. While advocates of Western hegemony find ways to justify U.S. and European military support of “democracies” against “autocracies” and Russian ideologues such as Alexander Dugin dream of a revived Great Russia, most peace and conflict studies scholars remain devoted to the analysis of identity-group struggles as a way of understanding both global conflict and internal polarization. Some peace scholars have identified important new sources of conflict such as environmental destruction, global medical crises, and climate change, but a great many continue to ignore the problem of empire and the emergence of new conflicts between would-be hegemons. (An outstanding exception to this shortsightedness is the work of Johan Galtung, whose 2009 book, The Fall of the US Empire – And Then What? TRANSCEND University Press, now seems prophetic.)

This general lack of attention to imperialism and its vicissitudes has reasons rooted in the history of the conflict studies field, but its political dimensions need to be identified if we hope to overcome the obvious weaknesses of peace movements when confronted by conflicts like Russia vs. Ukraine and NATO or the U.S. and its allies vs. China.  Particularly in the West, the current polarization of politics tends to produce two major tendencies: a right-wing populism whose ideological commitments are ethno-nationalist and isolationist, and a left-leaning centrism whose ideology is cosmopolitan and globalist. Neither tendency understands the emerging patterns of global conflict or has any real interest in creating the conditions for global peace. The Right advocates avoiding unnecessary wars, but its nationalism trumps its isolationism; thus, right-wing leaders preach maximum military preparedness and advocate “defense” against traditional national enemies. The Left is consciously or unconsciously imperialist, a view that it expresses using the language of international “leadership” and “responsibility” as well as under the rubrics of “peace through strength” and “responsibility to protect.”

Most Democratic Party supporters in the U.S. fail to recognize that the current Biden Administration is a ferocious advocate of American imperial interests and  supports war preparations aimed at China and Russia; or else they do understand this, but view it as a minor issue compared with the threat of domestic neo-fascism a la Donald Trump. Similarly, most supporters of left and left-center parties in Europe fail to understand that NATO is currently a branch of the U.S. military machine and potentially the military-industrial establishment of a new European empire. Or else they suspect this but view the rise and expansion of NATO through lenses of hatred and suspicion of the Russians and fear of right-populist movements like those of Viktor Orban and Marine Le Pen. In either case, the result is that advocates of global peace tend to be separated from the domestic constituencies with which they might otherwise ally.

This isolation has been particularly notable in the case of the movement for peace through negotiations in Ukraine, which has yet to obtain any real traction in any Western nation. Indeed, the strongest advocates for immediate peace negotiations, aside from officials of the United Nations, tend to be figures associated with Middle Eastern and Asian nations like Turkey, India, and China.  From a Western perspective, then, the question most vexed and most in need of an answer is how to overcome the isolation of peace movements.

Two answers suggest themselves, but each produces problems that generate a need for further discussion:

The first answer: establish an alliance between left-wing and right-wing peace advocates. Anti-war liberals and socialists could unite with conservative isolationists and libertarians to create a cross-party coalition against foreign wars.  In fact, this sort of coalition sometimes comes into existence spontaneously, as in the United States during the period following the 2003 invasion of Iraq. The difficulty, of course, is that this is precisely what Marxists call a “rotten bloc” – a political organization that, because it finds common cause on only one issue, is bound to break apart when other issues become salient. In addition, if anti-war work means uprooting the causes of war as well as opposing some current military mobilization, the elements of a “rotten bloc” are unlikely to agree on how to identify and remove those causes.

The second answer: convert the left-liberal party to the perspective of anti-imperial peace advocacy, or split the putative left into pro-war and anti-war constituencies and work to secure the latter’s supremacy. The obstacle to doing this is not only the general fear of a right-wing takeover noted above but the weakness of the peace camp within the left-wing milieu. In the U.S., most “progressives” (including self-anointed Democratic Socialists) have been eerily silent on the war in Ukraine, either out of fear of isolating themselves on domestic issues or because they accept the conventional justifications for a war against “Russian aggression.”  This suggests the need to break with the empire-builders and to build anti-capitalist organizations committed to ending imperialism and making global peace. This is the solution to the problem, at least in theory, but whether people can be mobilized in large enough numbers to enact it during the period of “partial war” is doubtful.

This suggests a connection between the two emerging forms of violent conflict discussed earlier. Partial wars of the sort being fought out in Ukraine can intersect inter-imperial struggles like that between the U.S./Europe alliance and Russia. When this occurs they become “frozen” conflicts which, however, have the capacity to escalate dramatically – that is, to move toward total war – if either side faces a disastrous defeat, or if inter-imperial conflict intensifies significantly. Inter-imperial conflict itself can be conceived of either as a revival of the Cold War manageable, to some extent, by the processes of mutual deterrence developed during the earlier era, or as a new type of struggle posing new risks, including a much greater danger that nuclear arms (starting with low-yield weapons) will be used either by the major parties or by their allies. My own view, to be presented in a later editorial, is that it represents a new type of struggle that greatly increases the danger of all-out nuclear war.

The immediate conclusion that one may draw from this is that there is an urgent need for peace scholars to recognize emerging forms of global conflict, analyze the new conflict dynamics, and draw practical conclusions from this analysis.  At the same time, peace activists urgently need to identify the causes of their current weakness and isolation and to devise methods to increase their influence greatly among members of the public and reachable decision-makers. In these efforts international conversations and actions will be of critical importance, since the world as a whole is finally, and rightfully, slipping out of the control of the West.