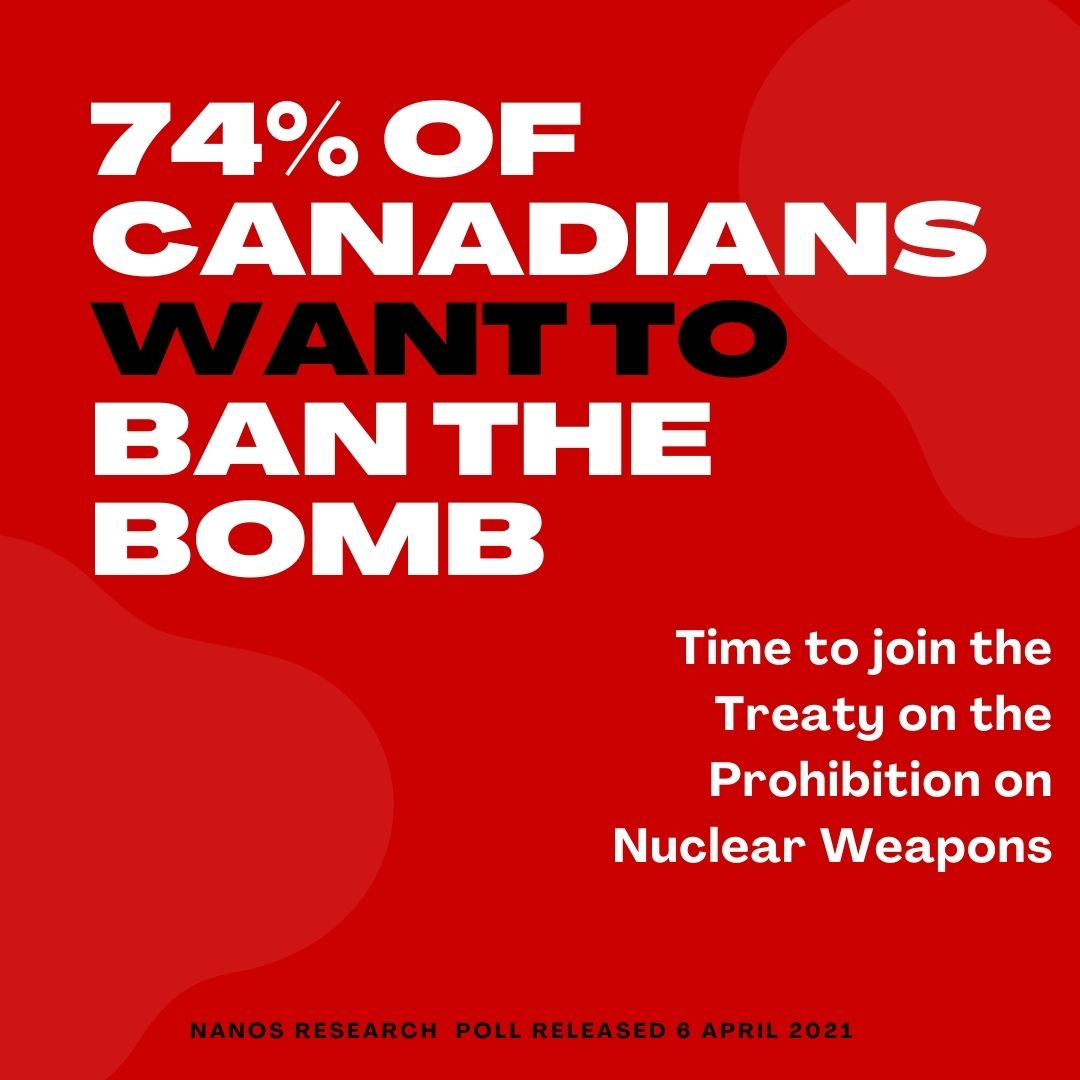 TORONTO — The threat posed by nuclear weapons is of major concern to Canadians according to a new poll released by Nanos Research. The poll results show that Canadians are very positive about key solutions the disarmament movement has been advocating and that Canadians are action oriented in responding to the nuclear threat.

74% of Canadians support (55%) or somewhat support (19%) Canada signing and ratifying the United Nations Treaty on the Prohibition of Nuclear Weapons that became international law in January of 2021. The same percentage agreed (51%) or somewhat agreed (23%) that Canada should join the UN Treaty even if, as a member of NATO, it came under pressure from the United States not to do so.

76% of Canadians agreed (46%) or somewhat agreed (30%) that the House of Commons should have committee hearings and debate Canada’s position on nuclear disarmament.

85% of respondents stated that Canada was not prepared (60%) or somewhat not prepared (25%) to deal with the emergency if nuclear weapons were detonated somewhere in the world. 86% of Canadians agreed (58%) or somewhat agreed (28%) that no government, health system or aid organization could respond to the devastation caused by nuclear weapons and that they therefore should be eliminated.

71% of respondents agreed (49%) or somewhat agreed (22%) that they would withdraw money from any investment or financial institution if they learned it was investing funds in anything related to the development, manufacturing or deployment of nuclear weapons.

50% of Canadians indicated that they would be more likely (21%) or somewhat more likely (29%) to support a political party that advocated Canada signing and ratifying the UN Treaty on the Prohibition of Nuclear Weapons. 10% of respondents stated they would be less likely (7%) or somewhat less likely (3%) to support such a political party and 30% said this would not impact their vote.

The Nanos Research poll was commissioned by the Hiroshima Nagasaki Day Coalition in Toronto, The Simons Foundation Canada in Vancouver, and the Collectif Échec à la guerre in Montreal. Nanos conducted an RDD dual frame (land- and cell-lines) hybrid random telephone and online survey of 1,007 Canadians, 18 years of age or older, between March 27th to 30th, 2021 as part of an omnibus survey. The margin of error for a random survey of 1,007 Canadians is ±3.1 percentage points, 19 times out of 20.

The full Nanos national survey report can be accessed at https://nanos.co/wp-content/uploads/2021/04/2021-1830-Nuclear-Arms-Populated-Report-with-Tabs-FINAL.pdf

“This is profoundly gratifying to me that Canadian public awareness has been raised so significantly,” stated Setsuko Thurlow, a member of the Hiroshima Nagasaki Day Coalition.

“I want to testify before a Parliamentary committee about what I witnessed as a Hiroshima survivor and to have our Members of Parliament debate what role Canada can play in the abolition of nuclear weapons.” Thurlow co-accepted the Nobel Peace Prize awarded to the International Campaign to Abolish Nuclear Weapons in 2017.