Munich Is Not in Ukraine: Appeasement Begins at Home 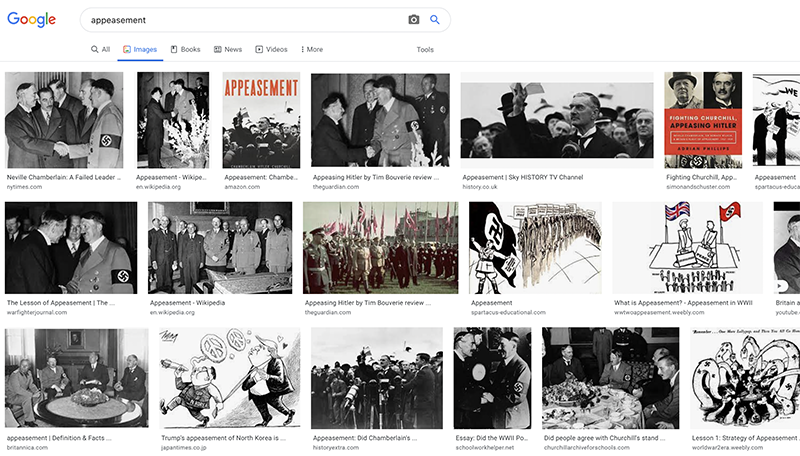 The word “Munich” — for me it calls up images of surfing in a giant park with nude sunbathers and nearby beer halls. But in U.S. news media it means the unconscionable failure to launch a war more quickly.

According to the new Munich movie on Netflix — the latest in the relentless avalanche of WWII propaganda — the decision made at Munich not to launch WWII just yet was not the horrendous moral failure we’ve all come to know and love, but actually a shrewd part of the battleplan aimed at allowing time for Britain to build up its military, thereby winning the utterly inevitable war.

Oh boy. Where to start? Britain and the United States played minor roles in WWII, which was principally won by the Soviet Union. The war was not decided by the state of the British military. WWII was not a moral good, but the worst thing ever done in any short space of time. If we want to travel back in time and prevent the war, we’ll do better to go back and prevent part one, otherwise known as the Great War. We’ll also do well to stop U.S. and British companies funding and arming the Nazis, to undo decades of U.S. and British prioritization of keeping leftists down in Germany, and to persuade England and France to accept the Soviet proposal to join in opposition to German war rather than seeking a militarized Germany and hoping to direct its assaults toward Russia.

Whether the famous original sin of “appeasement” created the war or actually won it, it’s still part of a cultural saturation effort to make war appear inevitable, even in a radically different world. Once you fantasize that war is inevitable in some new spot, like Ukraine, you’re best off preparing for it, even starting it, or at least provoking it. This is what’s called a self-fulfilling belief.

But what if the great appeasement fear is missing the mark completely? What if “Munich” is not in Ukraine. What if it’s in Washington, D.C.? When President Biden says it’s his sacred duty to go on arming Eastern Europe, how much of that is “standing up to” Russia, and how much of it is bowing down before the weapons dealers, the war mongers, the NATO bureaucrats, the bloodthirsty media, and the Pentagon? What if Munich is actually not in Europe at all?

If we insist on finding Munich in Ukraine, we had better get clear on who is playing the role of the Nazis. I know it’s forbidden to compare anyone to Nazis, unless it’s the Russians or the Syrians or the Serbians or the Iraqis or Iranians or Chinese or North Koreans or Venezuelans or doctors advocating vaccinations or rioters at the U.S. Capitol or, really, just about anyone other than, perhaps, the self-identified neo-Nazis in the Ukrainian government and military. But it’s mostly forbidden because of the Nazis’ sadistic and genocidal domestic policies, majorly inspired by the United States, and openly tolerated by the U.S., UK, and other nations that publicly refused for years to help refugees — and did so for openly antisemitic reasons. So, again, let’s be clear who’s expanding an empire and who’s afraid of losing territory.

When Germany recently refused to allow Estonia to send weapons to Ukraine, was it perhaps nationally playing the role of those who courageously stood up against Nazism? When the President of France recently urged Europe to decide its own approach toward Russia and make it a less hostile one, what can he have had in mind? When Russia sees all the weapons and troops amassing and practicing near its borders, shouldn’t the Pentagon Entertainment Office — an office that promotes the Munich/Appeasement story through film and television — want the very last thought in the minds of Russian officials to be “We must not appease”?