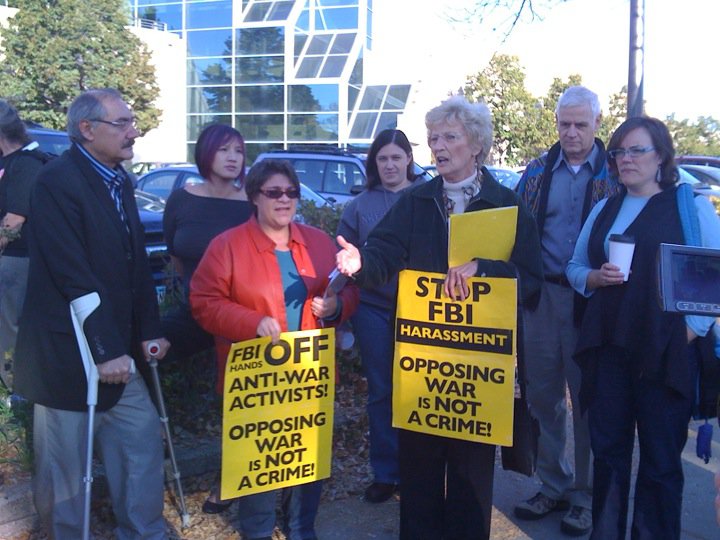 By Sarah Martin and Meredith Aby-Keirstead, Fight Back News, June 30, 2022

Minneapolis, MN – Marie Braun, 87, a longtime activist and beloved and respected leader in the peace and justice movement in the Twin Cities, died on June 27 after a very brief illness.

The response of Dave Logsdon, President of Veterans for Peace Chapter 27, reflects the reaction of so many, “Such a shock. She is so strong it’s hard to believe this news. What a giant in our peace and justice movement.”

Marie Braun was a member of Women Against Military Madness (WAMM) nearly from its inception 40 years ago. After her retirement in 1997 from the psychology practice that she ran with her husband John, she turned her full attention, incomparable work ethic, legendary organizational skills, boundless energy and warmth and humor to anti-war work.

She traveled to Iraq with Ramsey Clark, Jess Sundin and others on an International Action Center delegation in 1998 at the height of the brutal U.S. sanctions against that country. Sundin gave this remembrance to Fight Back!:

“I was just 25 years old when I traveled with Marie to Iraq for a solidarity delegation to challenge the U.S. and UN sanctions that caused so much death and hardship. It was a life-changing journey for me, one made possible in many ways by Marie.

“Marie helped organize the fundraisers that paid my way, and she and her husband John made a substantial contribution themselves. The 1998 delegation was the first of its kind to Iraq, and I’m not sure I would’ve had the confidence to make that trip with 100 strangers from across the country, if I wasn’t traveling with a veteran of the Minneapolis peace movement.

“Marie took myself and another younger traveler under her wing, and her mentorship didn’t stop at the airport. Visits to a pediatric hospital and Al Amiriyah bomb shelter, dinner with the Iraqi family of friends from Minnesota or dancing with students at an art school. We would stay up late at night talking about our days, and Marie was the rock that I leaned on to process the horrors of war carried out against the loving and generous Iraqi people. She got me through.

“Back home, Marie set the standard for what international solidarity looks like. At the same time, she never forgot her family, she never stopped finding joy and cause to laugh, and she always encouraged young people like me to make a home for ourselves in the movement,” Sundin said.

Marie began the weekly vigil at the Lake Street bridge which has not missed a single Wednesday in its 23 years of anti-war presence, from the U.S./NATO bombing of Yugoslavia until today with the U.S./NATO provoked conflict in Ukraine. For many years she and John were the ones to bring the signs, often newly made that week, reflecting whatever country the U.S. was bombing, sanctioning or occupying.

In the runup to Desert Storm, she and John organized a campaign for WAMM members to distribute thousands of lawn signs which said “Call your congressperson. Say no to war on Iraq.” These signs were not only pervasive across the lawns in our city but were also requested by other communities across the country.

For many years Marie organized a service at their church, Saint Joan of Arc, on the feast of the Holy Innocents. She transformed this remembrance of the slaughter of the children in Palestine by Herod, to a memorial for the children of Iraq killed by U.S. bombing and sanctions.

Marie organized days-long occupations at U.S. Senators’ Wellstone, Dayton and Coleman’s offices. She brought to town national leaders like Cindy Sheehan, Kathy Kelly and Denis Halliday, the UN humanitarian coordinator in Iraq, and made sure they spoke to standing-room-only crowds. She developed a statewide network of anti-war activists to host speaking tours and to pressure elected officials. She left no stone unturned in her work against U.S. imperialism in Iraq, a tenacity she applied to whatever she undertook.

Alan Dale, Minnesota Peace Action Coalition founder tells the story, “Marie was the most consistent activist, working with a wide range of people from many backgrounds, always keeping true to her own principles. Marie often took on the role of peacekeeper coordinator or lead marshal for protests. At one of the Iraq war anniversary protests starting at Loring Park, hundreds of people had gathered to march. Then the police arrived. The lead cop seemed beside himself that all these people planned to march without their permission. The lead cop demanded someone’s drivers’ license so he knew where to send a summons to, Marie said, ‘You can have my drivers license, but we are still going to march.’ By then, there were 1000 to 2000 people gathered. The cops just gave up and left.”

In 2010, anti-war activists in Minneapolis and around the Midwest were targeted by the FBI for their peace and international solidarity activism. Both these writers were included in those subpoenaed to a grand jury and targeted by the FBI. Marie helped us organize our resistance through the Committee to Stop FBI Repression. Joe Iosbaker, an activist from Chicago who was also subpoenaed, remembered her solidarity, “I remember her best from her efforts with congresspersons and senators on behalf of the Antiwar 23. Getting those elected officials to speak out in our defense seemed unimaginable to me, but not to Marie and the veteran peace activists in the Twin Cities! And they were right.”

For the past several years Marie chaired the WAMM End War Committee. Mary Slobig said, “I can’t imagine the End War Committee without her sending out the agenda, holding us to task, and taking notes. She’s our rock!”

Kristin Dooley, the director of WAMM told Fight Back!, “Marie has been my friend, my mentor, and my partner in activism for decades. She was an incredibly capable activist. She could handle finances, personnel, membership renewals, fundraising, press and writing. She willingly interacted with religious, political, civil and police authorities. Marie let me know she had my back and I became a better activist because she believed in me.”

Marie inspired us by her commitment and wasn’t afraid to ask for involvement or money. Most of us have said, “You can’t say no to Marie.” She was a pillar of the peace movement and a key motivator for actions and effective change. She also was a skilled mentor and teacher and leaves behind strong organizations and individuals to carry on the struggle. She brought out the best in us, and we and the peace movement will miss her beyond words.

Memorials can be sent to Women Against Military Madness at 4200 Cedar Avenue South, Suite 1, Minneapolis, MN 55407.