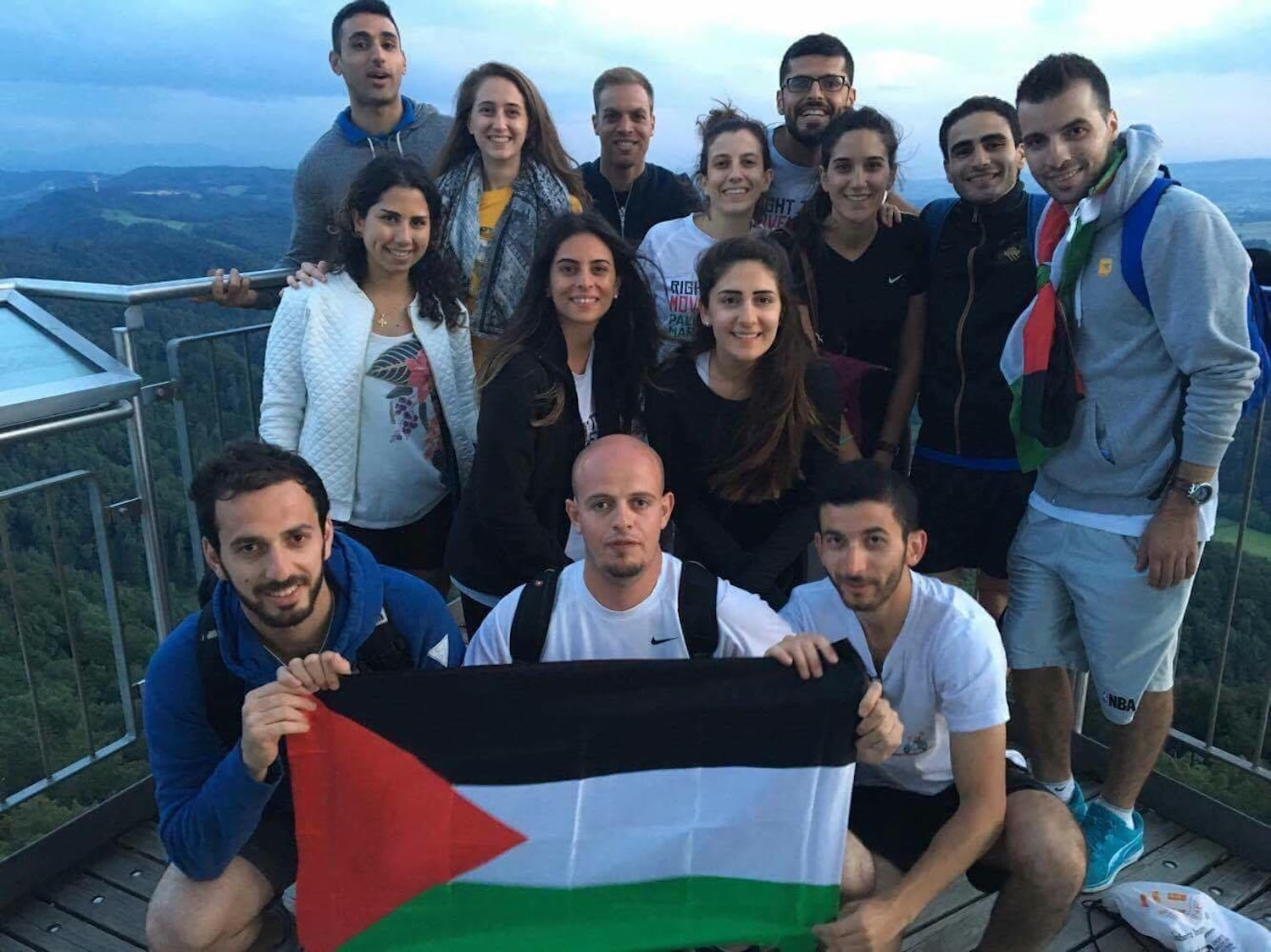 October 7, 2016 Burlingame CA – Nine Palestinian marathoners, who normally train in the Israeli-occupied West Bank, will be running through the streets of Mountain View and Cupertinoon Thursday Oct. 13th to convince Google and Apple to add hundreds of missing Palestinian villages to their maps. (Video of them training in the Palestinian countryside can be watched here).

The marathoners will run from Google’s headquarters (where its subsidiary Waze is also based) to Apple’s headquarters to deliver letters to the Vice Presidents of Mapping. Though Apple and Google claim it is not a priority to map the West Bank, many Israeli settlements, which are illegal under international law and violate official US policy, can be found on their maps. The runners will speak to Google and Apple executives from their unique perspective as athletes who live under Israeli occupation and deal with mobility restrictions and the threat of violence on a daily basis.

The marathoners are from Right to Movement, a non-profit, non-political, non-religious organization of over 300 runners with branches throughout Palestine, in Great Britain, Norway, and Israel. This group organizes the annual Palestine Marathon along the Separation Wall, through the streets of Bethlehem, which is now in its 5th year (see this year’s Palestine Marathon April 1, 2016).

“What a difference it makes when you see the land as it really is, including the Palestinian villages that dot the countryside. Literally putting us on the map would show the world that we exist and that there’s hope for the future,” said George Zeidan, 27, a co-founder of Right to Movement and a finance officer at a Danish/Norwegian aid organization in Jerusalem.

OCT. 13th 8 AM: Race begins at Googleplex, 1600 Amphitheatre Pkwy, Mountain View when the runners deliver their letter to Google Vice President Jen Fitzpatrick, and Di-Ann Eisnor, Chairman of Platial and Community Geographer at Waze and tour the Google Maps department, then run to Apple down city streets, 3.1 miles.

9 AM: Race ends at Apple, 1 Infinite Loop, Cupertino, where the runners will deliver their letter to Apple Vice President Eddy Cue and meet the Apple Maps team. The runners will be available for a photo-op during this time.

“I want everyone who works at Google and Apple to understand that we are ordinary people just like them, who love life and seek to live peacefully with basic human rights,” said Tala Qaddoura, an aeronautics engineering master’s student at Illinois Institute of Technology who grew up in the West Bank?. “Mapping will help the Palestinian villages hold on.”

Their message is urgent because, according to the Israeli human rights group B’Tselem, more Palestinian homes have been demolished this year than in any year in the past decade in a surge of demolitions still underway against these “invisible” villages. Being shown on the maps will give the villages more permanency and legitimacy locally, regionally, and in the eyes of the world community and help prevent the bulldozing of Palestinian homes to make room for the expansion of illegal Israeli settlements. Here‘s what the Google maps show now, and via animation, what they should be showing instead.

“They already have the data. My organization and our partner BIMKOM transferred the mapping data to both companies back in September,” said Donna Baranski-Walker, founder and Executive Director of Rebuilding Alliance, the Burlingame-based nonprofit that invited the marathoners. “It would be great to see Google Maps and Apple Maps add the Palestinian villages soon so the marathoners can deliver thank you notes instead of petitions.”

Saturday, Oct. 15th: 9 AM, Gaza 5K Run, Lake Merced Park, San Francisco. Organized by UNRWA, USA.
4 PM, Joining the artists of Estamos Contra El Muro / We Are Against the Wall, where participants will line up to bash the wall until it no longer stands at Southern Exposure Gallery, 3030 20th St, San Francisco.
7 PM, Bollywood Fundraiser in Los Altos, donate here

George Zeidan is a co-founder of Right to Movement. Born and raised in the Old City of Jerusalem, George is a Christian who attended university in Murfreesboro, NC. He has been working for three years for a non-profit organization called DanChurchAid in Jerusalem as the Finance, Procurement and Admin officer. He is keen to participate in the San Francisco Marathon, represent Palestine and share Right to Movement with people.

Tala Qaddoura is an aeronautics engineering master’s student at Illinois Institute of Technology in Chicago. She is a runner from Ramallah, and the Chicago Marathon will be her third.

Rebuilding Alliance, is a 501c3 non-profit organization dedicated to rebuilding war-torn communities and making them safe. Rebuilding Alliance opened fourteen years ago with a life-affirming vision: a just and enduring peace in Palestine and Israel founded upon equal rights, equal security, and equal opportunity for all. Rebuilding Alliance is asking Americans to send emails to Congress who can better get Google and Apple’s attention. and is working with AppsTownInc and designer Vandana Pai to launch a mobile app, Evincible, with a petition pressing the companies to add the missing villages.

Donna Baranski-Walker is Executive Director of Rebuilding Alliance. and was awarded Special Congressional Recognition by Rep. Barbara Lee and Rep. Anna Eshoo. In April 2016, Donna was awarded Rotary District 5150’s Service Award, and will soon be receiving the Rachel Corrie Conscience And Courage Award from the American Arab Anti-Discrimination Committee of Orange County. In 2010, on the 30th anniversary of the founding of the Polish Solidarity movement, Donna was awarded the Medal of Gratitude. Her work in the Middle East began in 1990 with a NYTimes op&dash;ed, “Small Lights in the Darkness,” received by the Iraqi Women’s Federation just before the 1st Gulf War.