Lost Generations: Past, Present and Future 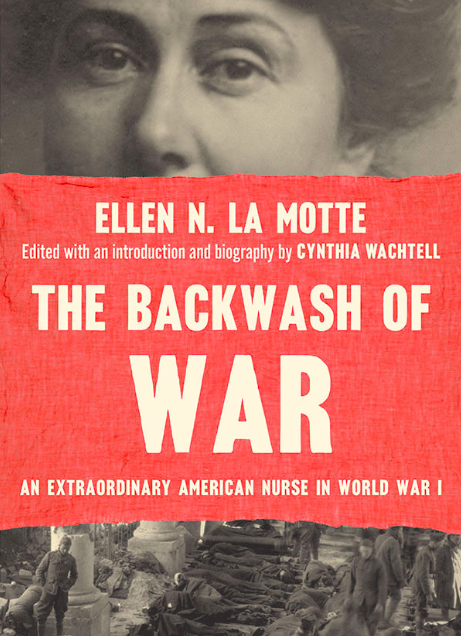 From 1899 to 1902, Ellen La Motte trained as a nurse at Johns Hopkins in Baltimore. From 1914 to 1916, she cared for wounded and dying French soldiers, first in a hospital in Paris and then in a field hospital 10 kilometers from Ypres and the bloody front-line trenches of WWI. In 1916 she published The Backwash of War, thirteen sketches of life among the wounded and dying that pulled the patriotic shroud off the brutal and ugly corpse of war.

The mandarins of war were having none of it. The machine demanded that morale be maintained and recruitment stepped up. And so the book was immediately banned in both France and England. And then in 1918, after the U.S. had joined the war, Backwash was also banned in the States, a casualty of the 1917 Espionage Act, designed, among other purposes, to prohibit interference with military recruitment.

It wasn’t until 1919, a year after the end of the war to end all wars, that the book was republished and made freely available. But it found little audience. Its moment had passed. The world was at peace. The war was won. It was time to think of the future and not how we had arrived at the present.

Cynthia Wachtell’s newly edited and published edition of The Backwash of War, coming as it does 100 years after the 1919 edition, is a welcome reminder, in this time of perpetual war, that we do need to think about how we arrived at the present, and about the truths we hide and ignore when we wipe the tape and fast forward to the future.

This new edition adds a useful introduction and short biography to the original 13 sketches, as well as 3 essays on war written during the same period and an additional sketch written later. Adding this additional context expands the scope of our appreciation of La Motte, from the magnifying glass view of spilled guts and amputated stumps inside the moment of war, to the spreading virus of the lost generation that followed it.

Ellen La Motte was more than just a nurse who experienced the First World War. After training at Johns Hopkins, she became a public health advocate and administrator and rose to the level of Director of the Tuberculosis Division of the Baltimore Health Department. She was a prominent suffragist who had contributed to the movements in both the U.S. and the UK. And she was a journalist and writer who had written numerous articles on nursing as well as a nursing textbook.

In the early years of the twentieth century she had also lived and worked in Italy, France and the UK. In France she had become a close friend of the experimental writer Gertrude Stein. Stein also attended Johns Hopkins (1897 – 1901), although as a medical doctor (she left before taking her degree), not a nurse. Wachtell points to Stein’s influence on La Motte’s writing. And although they are quite different writers, it is possible to see Stein’s influence in La Motte’s personalized, unvarnished and unapologetic voice in Backwash, as well as in her direct and spare style.

Another writer influenced by Stein around the same time was Ernest Hemingway, who, before the U.S. entry into the war, spent time at the Italian front as a volunteer ambulance driver. He too wrote about the war and its aftermath in a direct style. And in his 1926 novel The Sun Also Rises, he closes the circle when he uses the epigraph “you are all a lost generation,” a phrase he attributed to Gertrude Stein.

The lost generation was the generation that grew up and lived through the war. They had seen pointless death on a huge scale. They were disoriented, confused, wandering, directionless. They had lost faith in traditional values like courage and patriotism. They were disillusioned, aimless, and focused on material wealth – the generation of Fitzgerald’s Gatsby.

La Motte’s The Backwash of War shows where and how the seeds of this disillusion were sown. As Wachtell points out, La Motte did not believe WWI was the war to end all wars. She knew there would be another war and another war. The lost generation would beget another lost generation, and another.

She was not wrong. This is the situation we are now in, a cycle of perpetual war. Reading La Motte makes me think of the last seventeen years. She makes me think of Major Danny Sjursen, a recently retired U.S. Army officer and former history instructor at West Point, who served tours with reconnaissance units in Iraq and Afghanistan. He is part of the current lost generation. He is one of the few trying to break the cycle. But it is not easy.

Danny Sjursen came back from his wars with post traumatic stress disorder (PTSD). He came back, as he describes it in a recent article in Truthdig, “into a society that [was] no more ready for us than we [were] for it.” He continues:

“The military takes these kids, trains ‘em for a few months, then sends them off to some unwinnable war . . . . [T]hey’re sometimes killed or mutilated, but more often than not they suffer PTSD and moral injury from what they’ve seen and done. Then they go home, released into the wild of some shitty garrison town.”

The present and future lost generations don’t know how to function in peace. They’ve been trained for war. To deal with the disorientation, “the vet begins self-medicating; alcohol is most common, but opiates, and eventually even heroin, are also prevalent” Sjursen continues. When Sjursen was undergoing treatment for PTSD, 25 percent of the veterans undergoing treatment with him had attempted or seriously considered suicide. Twenty-two veterans a day commit suicide.

When Ellen La Motte wrote Backwash in 1916, she speculated that there would be another 100 years of war and then a long peace. Her hundred years have passed. War is still with us. According to the Veterans Administration, there are currently 20 million veterans of America’s military adventures still alive, almost 4 million of whom are disabled.  And while the wounded and disabled veterans of the war Ellen La Motte witnessed may no longer be with us, as Danny Sjursen writes, “even if the wars ended tomorrow (they won’t, by the way), American society has another half-century ahead of it, laden with the burden of these unnecessary disabled veterans. It’s inescapable.”

This burden of unending lost generations will be with us for a long time. If we are to end war we must find ways to rehabilitate these lost generations. The truths told by Ellen La Motte, like the stories told today by members of Veterans for Peace, are a start.

Alan Knight, one time academic, private sector VP, development NGO Country Director and senior fellow at a research institute, is an independent writer and a volunteer with World BEYOND War.