Let’s Help End U.S. Support of the Duterte Regime in the Philippines 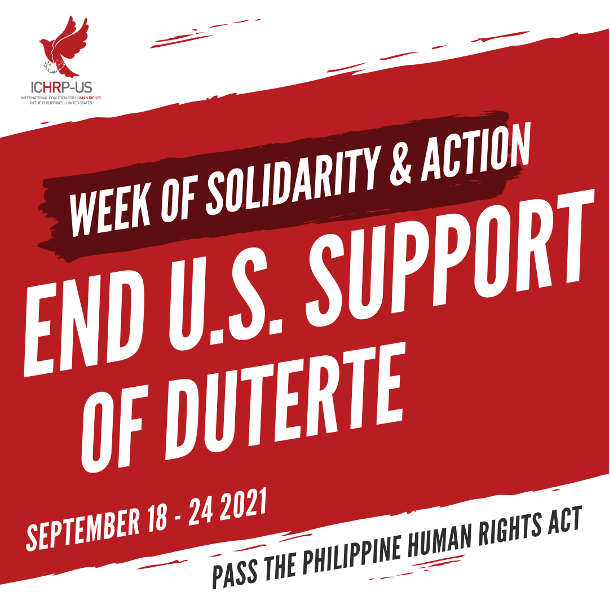 By The International Coalition for Human Rights in the Philippines, September 13, 2021

The International Coalition for Human Rights in the Philippines invites you to participate in a week of solidarity and action, from Sept 18-24th to End U.S. support of the Duterte Regime!

“There is now a chilling effect and the consequent restriction of civil society across broad swathes of Philippine society including national and local government officials, human rights groups, the media, as well as the academe and the education sector — including indigenous Lumad schools. All these undermine the independence, credibility and stability of the justice system as a protector of due process and human rights. . . . The Duterte administration’s unjust and unnecessary war is being enabled, expanded and encouraged by the support of other nations, particularly the United States. The bulk of US military aid to the Philippine government is for military operations in Mindanao, and in particular, the U.S. provides the aerial capacities through which violations of International Humanitarian Law are committed in Mindanao. More broadly, the U.S., Australia, Japan, Canada and Israel provide military aid in terms of weapons, training and intelligence, as well as financial support for the Philippines’ counter-insurgency program, Oplan Kapanatagan. As shown above, this program — an application of the United States’ Counterinsurgency Strategy — expands, legitimizes and encourages the violations of human rights in the name of counterinsurgency. Under the ICC’s Rome Statute, then, the U.S. and other nations are also liable for their material assistance in the violation of human rights and International Humanitarian Law in the Philippines.”

Meanwhile, outcry from the United States and around the globe has increased over the years. Student government bodies, labor unions, city, county and state level government bodies, as well as the United States Congress and international bodies like the United Nations and International Criminal Court have detailed and condemned the human rights crisis in the Philippines. At the roots of these efforts are people in the Philippines and around the world advocating for change.

When political prisoners have faced dire and unjust conditions, we have raised our voices. When killings have worsened in the Philippines, we have taken to the streets to protest. When military aid and arms sales have increased, we have mobilized in mass to call for the end of profit seeking military deals. As the Duterte regime’s term comes to a close in its final year, we want to continue to strengthen organizing to build a robust international solidarity movement against U.S. support of the Duterte regime and culminating in mass action in support of the passage of the Philippine Human rights Act. Please join us for the following days of action, and sign up to receive future action alerts in solidarity with the Filipino people. 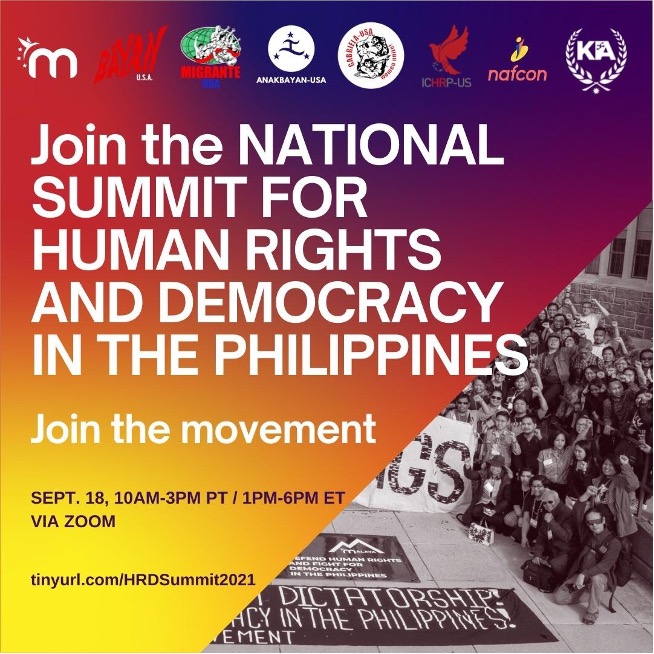 On Saturday September 18th, 10am-3pm PT / 1pm-6pm ET, join the National Summit for Human Rights and Democracy in the Philippines! This event aims to bring together all individuals and organizations who care about human rights, democracy and sovereignty in the Philippines together and build unities towards ensuring the end of the Duterte regime.

It will feature keynote speakers and messages from the Philippines and the United States, as well panels and workshops covering a variety of issues and campaigns from different organizations. It will be held via ZOOM. Register today! 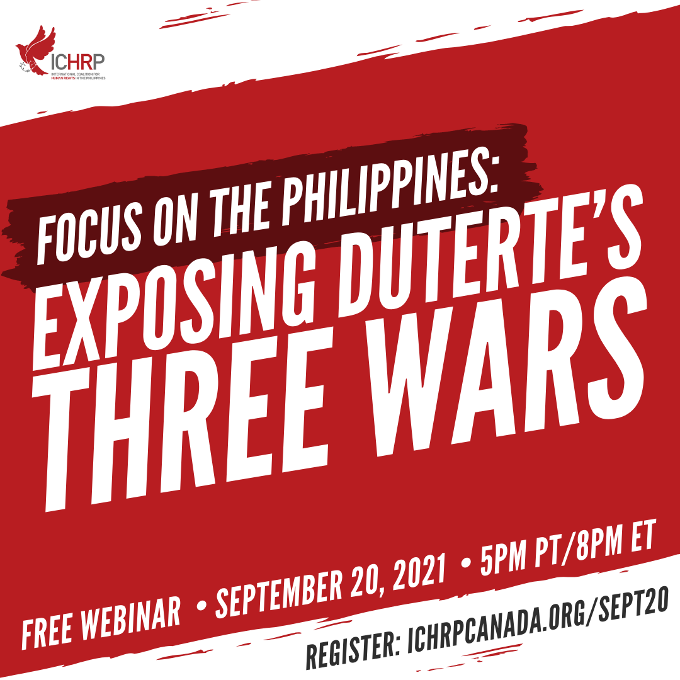 The alarming human rights situation in the Philippines is drawing international concern.

Following the June 2020 Office of the UN High Commissioner for Human Rights (OHCHR) report, people’s organizations and civil society demanded an independent international investigation of the Philippine human rights situation, amid a prevailing culture of impunity and the inadequacy of the domestic justice system.

INVESTIGATE PH is that independent international investigation. It is conducted by people’s organizations and civil society from all over the world. It aims to urge relevant UN bodies to make use of international mechanisms to hold perpetrators of human rights violations in the Philippines accountable and to deliver justice to victims. Its first report was released in March 2021, the second report will be released in June 2021, and the third report will be presented in September 2021 to the UN Human Rights Council when the High Commissioner will update on the implementation of the technical cooperation on human rights with the Philippine government.

Register here to hear about the third report of InvestigatePH.