Keep Pushing For WMDFZ In The Middle East 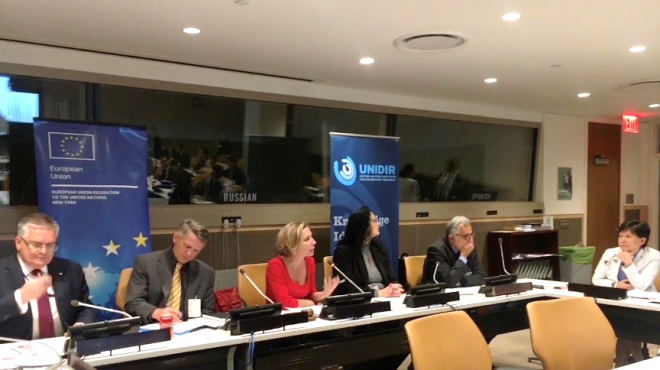 From Women’s International League for Peace and Freedom

The United Nations General Assembly (UNGA) first endorsed calls for the establishment of a Nuclear Weapon Free Zone (NWFZ) in a resolution approved in December 1974, following a proposal by Iran and Egypt. From 1980 to 2018, that resolution had been passed annually, without a vote by UNGA. Endorsement for the proposal has also been incorporated in a number of UN Security Council Resolutions. In 1991, United Nations Security Council Resolution 687 endorsed the goal of establishing a Weapons of Mass Destruction Free Zone (WMDFZ) in the Middle East region.

In 2010, the promise of a WMDFZ appeared likely to emerge, with the UN Secretary-General calling for progress on the goal and endorsing the idea of all states in the region convening to discuss the idea at the UN Middle East conference in Helsinki scheduled for December 2012. Though Iran agreed to attend the conference, Israel refused, and the United States cancelled the event just before it was going to take place.

In response, some nongovernmental organizations (NGOs) convened a conference in Haifa on December 5-6, 2013, saying “if Israel does not go to Helsinki, then Helsinki will come to Israel.” Some Knesset members were present. Tadatoshi Akiba, a mathematics professor and former mayor of Hiroshima who represented the Japanese organization “Never Again,” spoke at this conference. At least two WILPF US members were present in Haifa, Jackie Cabasso and me. Both Jackie Cabasso and I wrote reports which appeared in the Spring/Summer 2014 issue of Peace & Freedom (“USA Missing in Action on Nuclear Disarmament,” 10-11; “The Haifa Conference: Israelis Draw Line in Sand Over Nukes, 24-25).

Starting in 2013, President Obama began discussions for an interim agreement between Iran and the P5+1 (China, United States, United Kingdom, Russia, France, and Germany, with the European Union). After 20 months of negotiations, The Joint Comprehensive Plan of Action (JCPOA)—also known as the “Iran Nuclear Deal”—was accepted as the final framework in April. The historic nuclear deal was officially received by the United Nations and signed in Vienna on July 14, 2015. It limited the Iran Nuclear program and included enhanced monitoring in exchange for relief from sanctions.

For a detailed account of the history, see this Timeline of Nuclear Diplomacy With Iran from the Arms Control Association.

We in WILPF US supported the negotiations and agreement, and issued a statement on 8/4/2015 that was published and distributed during the concurrent NPT review in Vienna.

We had hoped to move forward on this issue in the subsequent Nuclear Non-Proliferation Treaty Review conference which occurs every five years. But at the 2015 meeting, state parties were unable to reach consensus on an agreement that would have advanced the work toward non-proliferation and disarmament in the Middle East. Any movement forward was completely blocked since they could not come to any agreement.

Then, on May 3, 2018, President Trump announced that the US was getting out of the Iran agreement and US sanctions were re-imposed and intensified. Despite European opposition, the US pulled out of the deal completely.

In spite of this, a recent meetings coverage document from the United Nations did give us some hope that something was going to move forward:

The United Arab Emirate’s delegate anticipated a positive outcome from the Conference on the Establishment of a Middle East Zone Free of Nuclear Weapons and Other Weapons of Mass Destruction, to be held from 18 to 22 November [2019] at Headquarters. He invited all regional parties to participate in its effort to hammer out a legally binding treaty that would prohibit nuclear weapons throughout the region. Echoing that perspective, Indonesia’s representative said that achieving such a zone is an important endeavour and called for the full and meaningful participation of States in the region.

This is especially important since recently, “[o]n 5 January 2020, in the aftermath of the Baghdad Airport Airstrike that targeted and killed Iranian general Qassem Soleimani, Iran declared that it would no longer abide by the limitations of the deal but would continue to coordinate with the International Atomic Energy Agency (IAEA) leaving open the possibility of resuming compliance.” (From the Wikipedia page on the Joint Comprehensive Plan of Action, which references a 5 January 2020 BBC article, “Iran rolls back nuclear deal commitments“.)

In the same UN meetings coverage document, the representative of the United States (John A. Bravaco) said his country “supports the goal of a Middle East Free of weapons of mass destruction, but efforts to that end must be pursued by all regional States concerned in an inclusive, cooperative and consensus-based manner that considers their respective security concerns.” He added, “In the absence of the participation of all regional States, the United States will not attend that conference and will regard any outcome as illegitimate.”

From this, we can understand that unless Israel moves forward on this issue, nothing will happen. Remember that Israeli activists had hoped to move Israeli people and had organized in the streets of Tel Aviv as well as organizing conferences like Haifa.

But in the UN document, the Israeli representative’s statement is: “As long as a culture of non-compliance with arms control and non-proliferation treaties persists in the Middle East, it will be impossible to promote any regional disarmament process.” He said, “We are in the same boat and we must work together to reach safe shores.”

Before the WMDFZ becomes an international issue, it must be taken on by the local countries and developed regionally. It will take time to build on transparent demands and to develop a very precise culture of checks and balances, in which verifications must take place. In the present climate of war and armament, it is not possible to develop this infrastructure. This is why many activists are now pressing for an international peace conference in the Middle East.

The most recent positive development is that on October 10, 2019, the United Nations Institute for Disarmament Research (UNIDIR) launched their project on the “Middle East Weapons of Mass Destruction Free Zone (WMDFZ)” on the margins of the current session of the First Committee On  Disarmament.

According to a UN press report about the launch of the project, “Dr. Renata Dwan, the director of the UNIDIR opened the event by outlining this new three-year research initiative and how it aims to contribute to efforts of addressing weapons of mass destruction threats and challenges.”

The next NPT Review conference (scheduled for April-May 2020) is soon upon us, though it may be delayed or held behind closed doors in response to the COVID-19 pandemic. Whenever and however it happens, all 50 or so WILPF sections worldwide need to pressure our UN representatives to move this issue forward.

Genie Silver of the Middle East Committee has already drafted the following letter to United States Ambassador Jeffrey Eberhardt from WILPF US. WILPF branches can use language from this letter to write your own letters and to educate the public about this important issue.

Odile Hugonot Haber is co-chair of the Middle East Committee for the Women’s International League for Peace and Freedom and is on the World BEYOND War board of directors.