On December 27, 2016, a small group of Veterans for Peace, Hawaii Peace and Justice and Hawaii Okinawa Alliance were at Pearl Harbor, Hawaii with our signs to remind Prime Minister of Japan Shinzo Abe and U.S. President Barack Obama that the best gesture of condolences for casualties caused by the Japanese attack on Pearl Harbor would be Japan preserving Article 9 “No War” of its constitution. 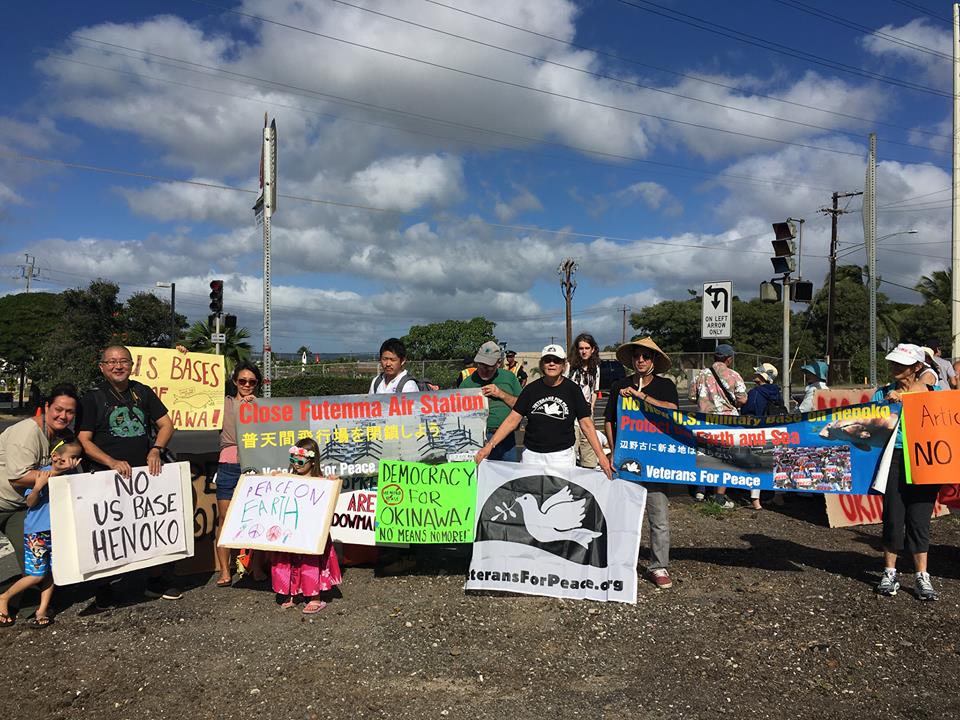 Mr. Abe, as the first sitting Prime Minister of Japan, came to the Arizona Memorial to express condolences for the deaths of 2403 including 1,117 on the USS Arizona during the December 7, 1941 Japanese Imperial Military forces attack on the Naval Base at Pearl Harbor and other US military installations on the island of Oahu, Hawaii.

Mr. Abe’s visit followed the May 26, 2016 visit of President Obama to Hiroshima, Japan, the first sitting U.S. President to go to Hiroshima where President Harry Truman ordered the United States military to drop the first atomic weapon on humans causing the deaths of 150,000 and 75,000 in Nagasaki with the dropping of the second atomic weapon. When President Obama visited the Hiroshima Peace Memorial Park, he did not apologize for the United States dropping the atomic bombs but instead came to honor the dead and call for a “world without nuclear weapons.”

During his visit to Pearl Harbor, Prime Minister Abe did not apologize for the Japanese attack on the United States, nor for the carnage the Japanese wrecked in China, Korea, Southeast Asia and the Pacific.  However, he did offer what he called “sincere and everlasting condolences to the souls” of those who were lost on December 7, 1941. He said the Japanese had taken a “solemn vow” to never again wage war.  “We must never repeat the horrors of war again.”

I have been on several speaking tours in Japan, from the northern island of Hokkaido to the southern island of Okinawa.  At each of the speaking events, I, as a U.S. citizen and as a U.S. military veteran, made an apology to the citizens of Japan for the two atomic bombs my country dropped on their country.  And at each venue, Japanese citizens came up to me to thank me for my apology and to give me their apology for what their government had done in World War II.  Apologies are the least we can do when we as citizens can not prevent politicians and the government bureaucracy from taking actions that we disagree with and that result in unbelievable carnage.

How many apologies must we, as American citizens, make for the chaos and destruction our politicians and government have caused just in the past sixteen years?  For the tens, if not hundreds of thousands, of deaths of innocent civilians in Afghanistan, Iraq, Libya, Yemen and Syria.

Will an American President ever go to Vietnam to apologize for the 4 million Vietnamese who died with the U.S. war on the tiny country of Vietnam?

Will we apologize to the Native Americans whose land our government stole from them and who killed tens of thousands of them?

Will we apologize to the Africans who were brought from their continent in cruel ships and forced into generations of horrific labor?

Will we apologize to the native Hawaiians whose sovereign monarchy was overthrown by the U.S. to have access for military purposes to the natural harbor we call Pearl Harbor.

And the list of needed apologies goes on and on for the invasions, occupations and colonializations of Cuba, Nicaragua, Dominican Republic, Haiti.

One of the phrases that sticks with me from my trips this fall and autumn to Standing Rock, North Dakota with the Dakota Souix native Americans at the remarkable protest encampment at the  Dakota Access Pipeline (DAPL) is the term “genetic memory.”  Representatives of the many native American groups that gathered at Standing Rock spoke frequently of the history of U.S. government in forcefully moving their peoples, signing treaties for land and allowing them to be broken by settlers intent on moving Westward, the massacres of native Americans to attempted to stop the theft of the land the U.S. politicians and government had agreed to—a memory seared into the genetic history of the native Americans of our country.

Unfortunately that genetic memory of the European colonizers of the United States who still are the dominant political and economic ethnic group in our country despite growing Latino and African-American ethnic groups, still pervades U.S. actions in the world.  The genetic memory of U.S. politicians and the government bureaucracy of invasion and occupation of countries near and far, which has seldom resulted in defeat for the U.S., blinds them to the carnage they have left in the path of our country.

So our small group outside the entrance to Pearl Harbor was there to be the reminder.  Our signs “NO WAR-Save Article 9” urged the Japanese Prime Minister to stop his attempt to torpedo Article 9 of the Japanese constitution, the NO War article, and to keep Japan out of the wars of choice that the U.S. continues to wage.  With Article 9 as their law, the Japanese government has for the past 75 years since the end of World War II, kept out of the wars that the U.S. has waged around the world.  Millions of Japanese have taken to the streets to tell their government they want to keep Article 9.  They do not want the bodies of young Japanese women and men brought home in the body bags of war. 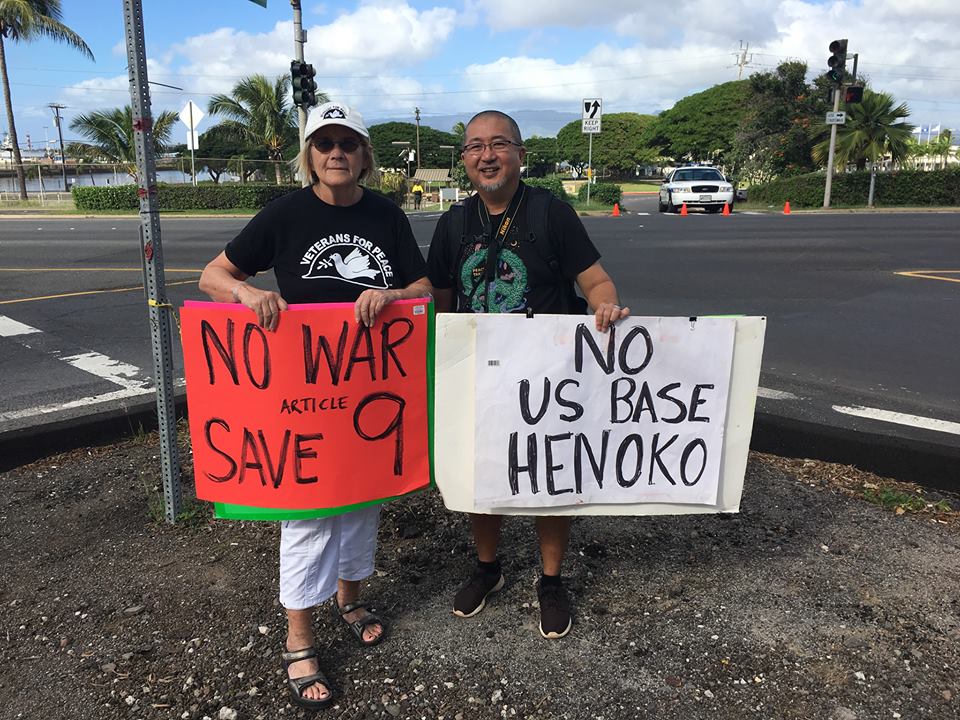 Our signs “Save Henoko,” “Save Takae,” “Stop the Rape of Okinawa,” reflected our desire as U.S. citizens, and the desire of most Japanese citizens, to have the U.S. military removed from Japan and particularly from the southern most island of Japan, Okinawa where over 80% of the US military population in Japan operates. The rape and sexual assault and murder of Okinawan women and children by U.S. military forces, the destruction of sensitive marine areas and the degradation of environmentally important areas are the issues on which Okinawans strongly challenge U.S. government policies that have kept U.S. military forces on their lands.