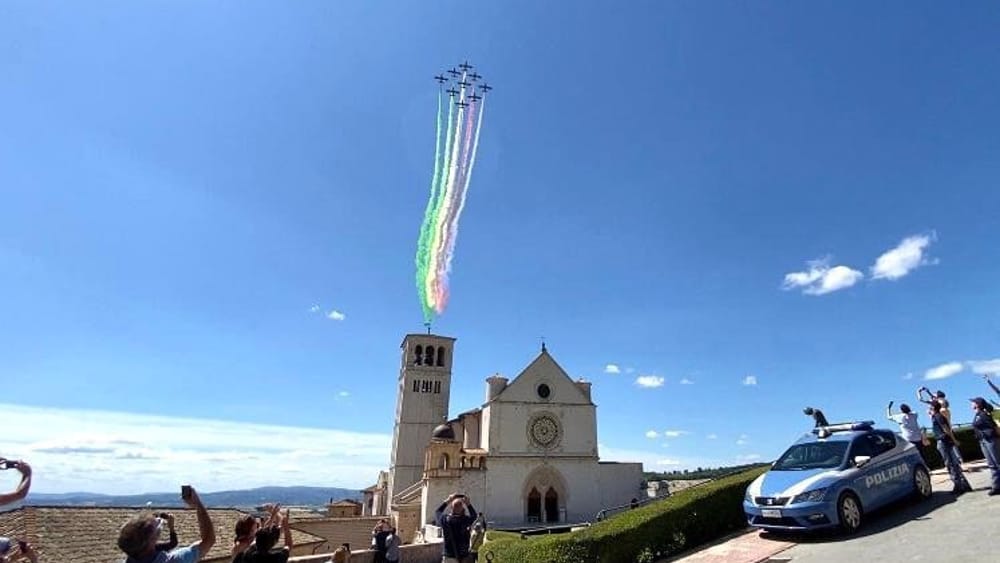 On St. Francis Day, the Minister of Defense Lorenzo Guerini (Democratic Party) sent the Frecce Tricolori fighters to fly over the Basilica of Assisi. “It is the strongest homage that our Italy has been able to pay to the Poverello (the little poor fellow), whom thousands of people turn to, while the pandemic aggravates poverty,” the Franciscan magazine wrote.

It is a questionable gift: an hour flight of the nine Frecce Tricolori fighters’ costs over 40,000 euros in public money, an amount with which 27 average net monthly salaries could be paid.

Next year the new and more powerful advanced training fighter T-345A, produced by Leonardo, that the Italian Air Force, buying in the number of 23 units, at a cost of nearly 380 million euros, will be flying. They will ensure better “training effectiveness” by preparing pilots for the use of F-35s and other warplanes.

“Our thanks go to the Generals and Minister of Defense Lorenzo Guerini”, wrote the Franciscans after the Frecce Tricolori aircrafts’ flyover. “Tonight, we will all go to sleep hoping for a better day.” These are soothing words, pronounced while other Italian fighters like Ghedi’s Tornado PA-200s, are about to be replaced by F-35As, and were already in Germany to participate in Steadfast Noon, NATO’s annual nuclear war exercise under US command.

Italy, Germany, Belgium, and the Netherlands participated with their own air forces and kept the US B-61 nuclear bombs ready for use on their territory, soon to be replaced by the more deadly B61-12 .

In this way, having reached 50 ratifications on October 24, 2020, they violate the Non-Proliferation Treaty and reject the UN Treaty on the Abolition of Nuclear Weapons which will enter into force within 90 days. However, nine countries with nuclear weapons and thirty NATO partners did not join.

In Europe, the UN Treaty has only been ratified by Austria, Ireland, Malta, Liechtenstein, San Marino, and the Holy See. In order to achieve the vital objective of the Treaty, a vast mobilization of public opinion for nuclear disarmament is indispensable, though currently non-existent since the threat of nuclear war is silenced by the political-media apparatuses, today even more than before since they speak only of a virus threat.

Thus, the increasingly dangerous steps, that Italy is taking in war preparation and consequent increase in military spending, are hidden. At the NATO Defense Ministers meeting on October 23, Minister Guerini confirmed Italy’s participation in a new NATO Space Center in Ramstein (Germany) and the necessary strengthening of nuclear forces to “keep our nuclear deterrent safe and efficient,” in front of “the serious challenge of Russia’s growing arsenal of nuclear missiles.”

Minister Guerini also signed on behalf of Italy with nine other NATO countries, a letter of intent for the construction of a ground-based missile system formally directed to the realization of a defense against short and intermediate-range missiles; while in reality it could be used for the launch of intermediate-range nuclear missiles similar to the US Euromissiles of the 1980s. Finally, Minister Guerini has pledged to further increase Italy’s military spending, from the current 26 to 36 billion euros per year. An additional 35 billion has already been allocated to this objective, especially by the Ministry of Economic Development, plus another 30 billion euros to be drawn from the Recovery Fund.

“The resources allocated to defense” – said Minister Guerini – “represent a strategic lever for the country’s economy.” It is, therefore, necessary “to make our fellow citizens better understand that in the Aerospace, Defense and Security industry there is a relevant piece of Italy’s competitiveness, which will be able to guarantee the future of the younger generations.” The future is therefore not so black: to paraphrase the well-known film, as long as there is war there is hope.