This Is the Israeli Military Calling: Civilizing War Has Failed 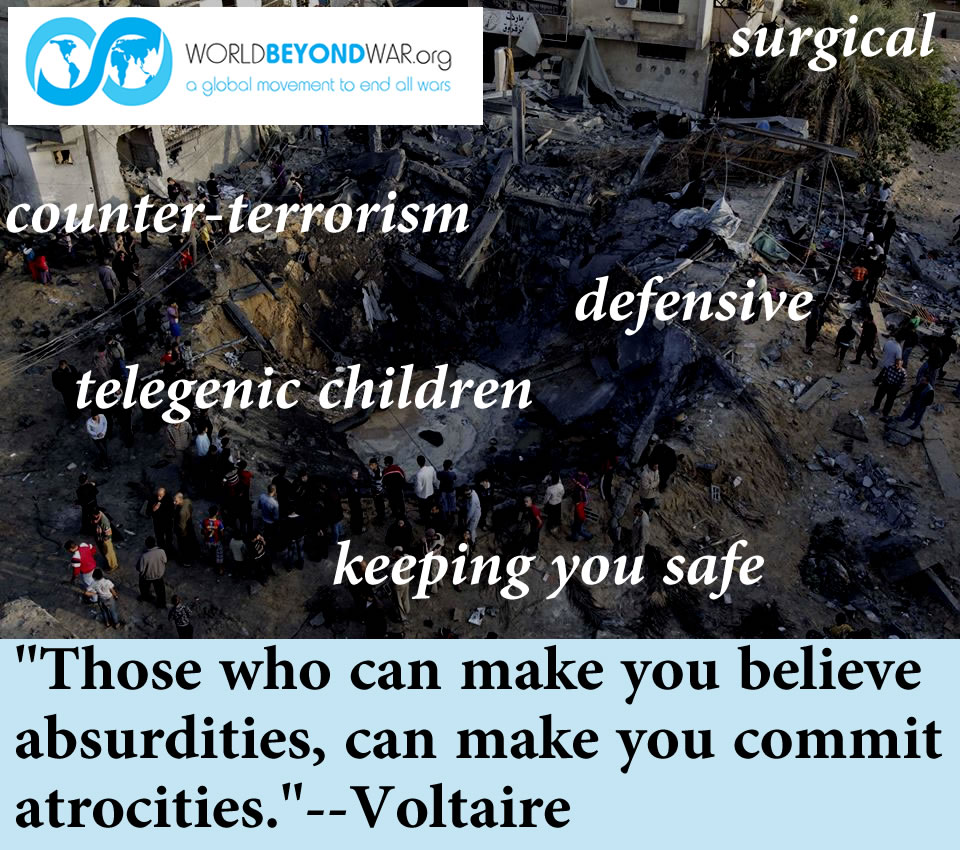 Probably the biggest news story of 1928 was the war-making nations of the world coming together on August 27th and legally outlawing war.  It’s a story that’s not told in our history books, but it’s not secret CIA history.  There was no CIA.  There was virtually no weapons industry as we know it.  There weren’t two political parties in the United States uniting in support of war after war.  In fact, the four biggest political parties in the United States all backed abolishing war.

I wouldn’t be bothering with it if it had.  In its defense, the Kellogg-Briand Pact (look it up or read my book) was used to prosecute the makers of war on the losing sides following World War II (an historic first), and — for whatever combination of reasons (nukes? enlightenment? luck?) — the armed nations of the world have not waged war on each other since, preferring to slaughter the world’s poor instead. Significant compliance following the very first prosecution is a record that almost no other law can claim.

The Kellogg-Briand Pact has two chief values, as I see it.  First, it’s the law of the land in 85 nations including the United States, and it bans all war-making.  For those who claim that the U.S. Constitution sanctions or requires wars regardless of treaty obligations, the Peace Pact is no more relevant than the U.N. Charter or the Geneva Conventions or the Anti-Torture Convention or any other treaty.  But for those who read the laws as they are written, beginning to comply with the Kellogg-Briand Pact makes far more sense than legalizing drone murders or torture or bribery or corporate personhood or imprisonment without trial or any of the other lovely practices we’ve been “legalizing” on the flimsiest of legal arguments.  I’m not against new national or international laws against war; ban it 1,000 times, by all means, if there’s the slightest chance that one of them will stick. But there is, for what it’s worth, already a law on the books if we care to acknowledge it.

Second, the movement that created the Pact of Paris grew out of a widespread mainstream international understanding that war must be abolished, as slavery and blood feuds and duelling and other institutions were being abolished.  While advocates of outlawing war believed other steps would be required: a change in the culture, demilitarization, the establishment of international authorities and nonviolent forms of conflict resolution, prosecutions and targeted sanctions against war-makers; while most believed this would be the work of generations; while the forces leading toward World War II were understood and protested against for decades; the explicit and successful intention was to make a start of it by outlawing and formally renouncing and rendering illegitimate all war, not aggressive war or unsanctioned war or inappropriate war, but war.

In the never-ending aftermath of World War II, the U.N. Charter has formalized and popularized a very different conception of war’s legality.  I’ve just interviewed Ben Ferencz, aged 94, the last living Nuremberg prosecutor, for an upcoming edition of Talk Nation Radio.  He describes the Nuremberg prosecutions as happening under the framework of the U.N. Charter, or something identical to it, despite the chronological problem.  He believes that the U.S. invasion of Iraq was illegal.  But he claims not to know whether the U.S. invasion and ongoing over-12-year war on Afghanistan is legal or not.  Why? Not because it fits either of the two gaping loopholes opened up by the U.N. Charter, that is: not because it is U.N.-authorized or defensive, but — as far as I can make out — just because those loopholes exist and therefore wars might be legal and it’s unpleasant to acknowledge that the wars waged by one’s own nation are not.

Of course, plenty of people thought more or less like that in the 1920s and 1930s, but plenty of people also did not.  In the era of the United Nations, NATO, the CIA, and Lockheed Martin we have seen steady progress in the doomed attempt, not to eliminate war, but to civilize it.  The United States leads the way in arming the rest of the world, maintaining a military presence in most of the world, and launching wars.  Western allies and nations armed, free-of-charge, by the United States, including Israel, advance war-making and war-civilizing, not war-abolition.  The notion that war can be eliminated using the tool of war, making war on war-makers in order to teach them not to make war, has had a far longer run than the Kellogg-Briand Pact had prior to its supposed failure and the Truman Administration’s remaking of the U.S. government into a permanent war machine in the cause of progress.

Civilizing war for the benefit of the world has been an abysmal failure.  We now have wars launched on unarmed defenseless people thousands of miles away in the name of “defense.”  We now have wars depicted as U.N.-authorized because the U.N. once passed a resolution related to the nation being destroyed.  And just seconds before the Israeli military blows up your house in Gaza, they ring you up on the telephone to give you a proper warning.

I remember a comedy sketch from Steve Martin mocking the phony politeness of Los Angeles: a line of people waited their turn to withdraw cash from a bank machine, while a line of armed robbers waited their turn in a separate line to politely ask for and steal each person’s money.  War is past the point of such parody.  There is no space left for satire.  Governments are phoning families to tell them they’re about to be slaughtered, and then bombing the shelters they flee to if they manage to flee.

Is mass-murder acceptable if done without rape or torture or excessive targeting of children or the use of particular types of chemical weapons, as long as the victims are telephoned first or the murderers are associated with a group of people harmed by war several decades back?

Here’s a new initiative that says No, the abolition of the greatest evil needs a renaissance and completion: WorldBeyondWar.org.