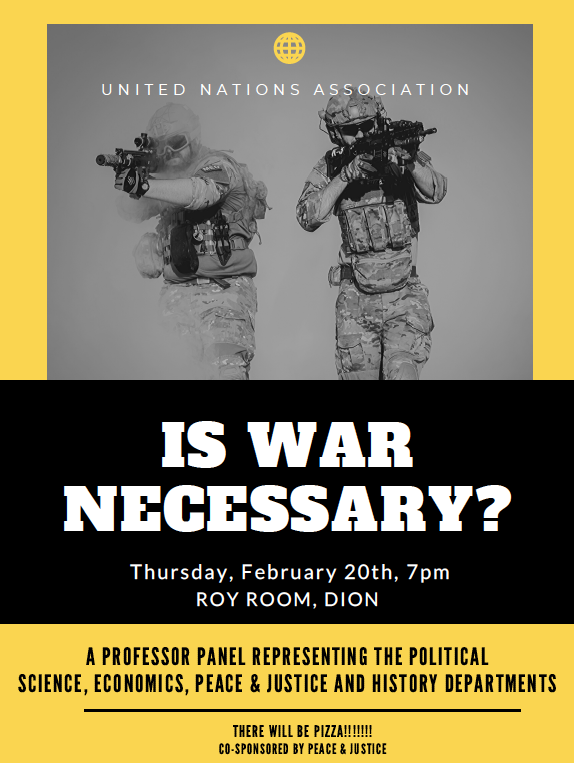 I want to bring my medical experience to bear on the question of war. As a physician, I knew certain drugs and treatments potentially had side effects that could harm a person more than the disease it was supposed to cure, and saw it as my job to be sure that for each drug I prescribed and each treatment I administered that the benefits outweighed the risk. Looking at war from a cost/benefit viewpoint, after decades of observation and study, it is clear to me that as a treatment for the problem of human conflict, war has outlived whatever usefulness it may have once had, and is no longer necessary.
To begin our assessment of costs and benefits, let us complete the question, “Is war necessary for what? The honorable and most accepted reason for war is to protect innocent life and what we value – freedom and democracy. Lesser reasons for war might include to secure national interests or to provide jobs. Then are the more nefarious reasons for war – to prop up politicians whose power depends on fear, to support repressive regimes that keep up the flow of cheap oil or other resources, or to make a profit selling weapons.
Against these potential benefits, the costs of war and preparations for war are outrageous, a reality that is hidden from view because costs are almost never counted in full. I divide costs into 4 discreet categories:
*Human cost – There have been between 20 and 30 million people killed in war since the end of WWII and the advent of nuclear weapons. Recent wars have produced many of the 65 million people currently displaced from their homes or countries. PTSD in American troops returning from Iraq and Afghanistan is 15-20% of the 2.7 million troops that have deployed there, but imagine what it is among Syrians and Afghanis, where the horror of war never ends.
*Financial cost – Preparation for war literally sucks money from everything else we need. The world spends 1.8 trillion/yr. on war, with the US spending close to half of that. Yet we are constantly told there is not enough money for medical care, housing, education, to replace lead pipes in Flint, MI, or to save the planet from environmental ruin.
*Environmental cost – Active wars, of course, cause immediate destruction of property and the ecosystem, but preparation for war does enormous damage long before war breaks out. The US military is the biggest single consumer of oil and emitter of greenhouse gasses on the planet.  Over 400 military bases in the US have contaminated nearby water supplies, and 149 bases are designated superfund toxic waste sites.
*Moral cost – The price we pay for the gap between what we claim as our values, and what we do contrary to those values. We could discuss for days the contradiction of telling our children “Thou shall not kill”, and later thanking for their service as they train to kill in large numbers at the behest of politicians. We say we want to protect innocent life, but when those who care tell us almost 9000 children a day die from malnutrition, and that an investment of a fraction of what the world spends on war could end hunger and much of the poverty on earth, we ignore their plea.
Finally, in my mind, the ultimate expression of the immorality of war lies in our nuclear weapons policy. As we sit here this evening, there are over 1800 nuclear warheads in the US and Russian arsenals on hair-trigger alert, that in the next 60 minutes could destroy each of our nations dozens of times over, ending human civilization and creating in a few weeks changes in climate worse than anything we currently fear happening in the next 100 years. How did we get to the place where we say that somehow this is OK?
But, you might say, what about the evil in the world, and what about saving innocent people from terrorists and tyrants, preserving freedom and democracy.  Research is teaching us that these goals are better achieved through nonviolent action, which is more often today called civil resistance, and consists of hundreds, if not thousands of methods of dealing with violence and tyranny.  Political science studies over the past decade provide mounting evidence that if you are fighting for freedom or to save lives, e.g.:
Trying to overthrow a dictator, or
Trying to create a democracy, or
Wishing to avoid another war
Trying to prevent genocide
All are more likely to be realized through civil resistance than through violence. Examples can be seen comparing the results of the Arab Spring in Tunisia, where a democracy now exists where there was none, vs the disaster that remains in Libya, whose revolution took the antique way of civil war, aided by the good intentions of NATO. Look too at the recent overthrow of the Bashir dictatorship in Sudan, or the successful protests in Hong Kong.
Does the use of nonviolence guarantee success? Of course not. Nor does the use of violence, as we have learned in Vietnam, Iraq, Afghanistan, and Syria. The bottom line is, most evidence points to the far superior cost/benefit ratio of civil resistance over military solutions when it comes to defending people and freedom, rendering war obsolete and unnecessary.
As for the less good reasons to wage war – to secure resources or provide jobs, in an age of global interdependence, it is cheaper to buy what you need than to steal it. As for jobs, detailed studies have shown that for every billion dollars of military spending, we lose between 10 and 20 thousand jobs compared to spending it on education or health care or green energy, or not taxing people in the first place. For these reasons too, war is unnecessary.
Which leaves us with only 2 reasons for war: to sell weapons, and to keep politicians in power. In addition to paying the enormous costs already mentioned, how many young people want to die on the battlefield for either of these?