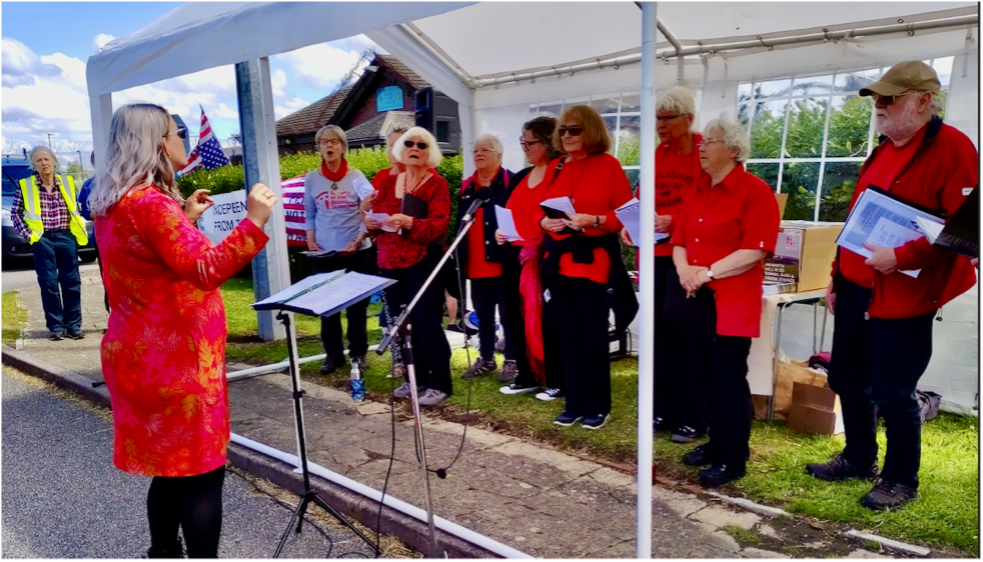 The Menwith Hill Accountability Campaign’s annual Independence from America Event was held on the grass verge outside the Main Gates of NSA Menwith Hill. After a two year gap caused by Covid-19 it was reassuring to be outside in the sunshine once more.

The Main Gates were closed to all traffic because of a major infrastructure upgrade being undertaken at Menwith Hill.

A large white tent provided the stage for the event and had a display of information about the Menwith Hill Accountability Campaign including the 3D Report and some of the new merchandise. A smaller blue tent provided space for refreshments and the Movement to Abolition War.

Hazel Costello opened the proceedings with a welcome to those attending and reported the apologies received from Thomas Barrett and Bishop Toby Howarth. Hazel also reminded us of the great contributions to peace work done by Anni Rainbow, Bruce Kent and Dave Knight who have died recently. A minute of silence gave space to think of them and others who have given so much. 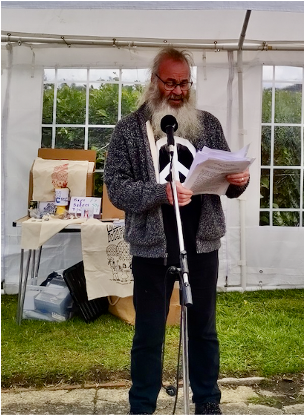 A letter for the Base Director was then handed over to Geoff Dickson who mentioned that this was the tenth time he had received the letter of invitation to the Base Director. Over those ten years no reply has been received from the different Base Directors who have been in post.

The reading of the Declaration of Independence by Moira Hill and Peter Kenyon was a helpful reminder of the demand for independence made by the people of north America in 1776. Now, 246 years later, we in turn must ask for Independence from America.

Eleanor Hill then conducted the East Lancs Clarion Choir who were in full voice with some delightful music culminating in a rendition of Finlandia. 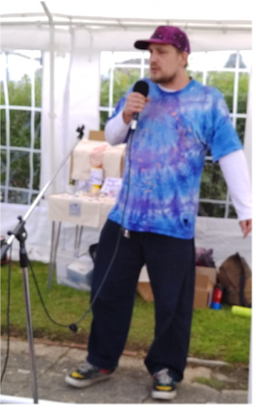 It was a privilege to hear Molly Scott Cato talking about what is meant by wanting peace leading to preparing for peace. There are tools for peace which have been developed and tested but they are so easily set aside by the use of military options. Military prowess can bring political esteem and great financial gains for arms manufactures with human suffering as collateral damage along the way. Understanding the causes of conflict is an essential element in preventing conflict.

Microphone Jack gave a great performance and helped us look at the situation from a  number of different perspectives. A lot of energy went into his performance and it was appreciated.

The Movement to Abolish War is said by some to be seeking something impossible. Tim Devereux reminded us that at previous times the abolition of slavery was thought to be impossible, but it has been achieved. Working on a national basis and reaching out widely the Movement to Abolish War has produced some very good literature which is well worth reading. A postcard sums it up with “If war is the answer it must be a silly question.” 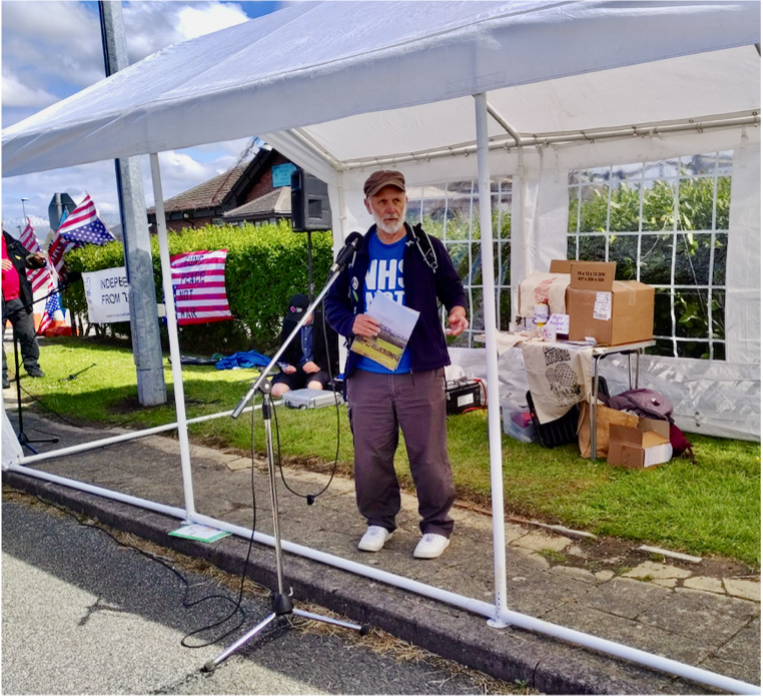 The complexity of the issues presented by Menwith Hill was explored by Prof Dave Webb who has done a lot for CND and the Global Network Against Weapons and Nuclear Power in Space. The sheer number of satellites and miscellaneous debris in orbit around the earth is presenting new hazards. Nations and corporations spend valuable time and effort adding to the carbon footprint on earth and the clutter in space.

The event ending with thanks being expressed to all who attended and participated, the Bondgate Bakery for providing the much appreciated food and to the North Yorkshire Police for their assistance in making the area safe for the event to take place in.