In South Africa: Honoring Victims of an Explosion at a Weapons Factory 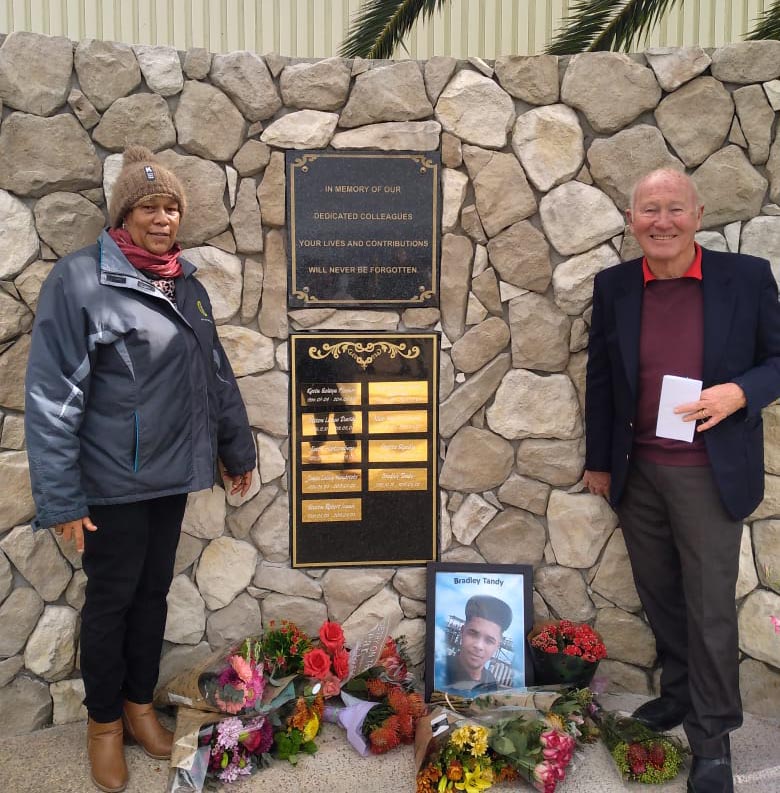 Rhoda Bazier of the Greater Macassar Civic Association and Terry Crawford-Browne of World BEYOND War – South Africa in front of the memorial wall just inside the main entrance gate to Rheinmetall Denel Munitions. The plaques list the names of the eight workers who were killed four years ago, plus one other.

World BEYOND War was part of an event on Saturday honoring them. See news coverage here.

Terry Crawford-Browne of World BEYOND War said the following:

We acknowledge them again today, and pay tribute to their families gathered here who still suffer the appalling conduct of our national, provincial and municipal governments in colluding with the RDM cover-up.  The Minister of Public Enterprises, Pravin Gordhan four years ago promised an open and transparent investigation in which “no stone would be left unturned”.  But, Gordhan has been silent ever since.

During the weekend before he died, Nico Samuels told his family that he was being overruled by RDM management, and that a new valve for a blending machine was not fitting properly. That blending machine, which was mixing chemicals for 155mm artillery shells, exploded on the Monday.  Debris was found over a kilometre away.  Another worker in an adjacent building who survived the explosion, now suffers level four cancer   RDM’s internal report in 2019 callously  attempted to blame Samuels for the disaster.

Totally discrediting RDM and their internal report, testimonies at the Labour Department hearings last year not only exposed RDM managerial incompetence, but also that the TNT equivalence of the explosion was approximately half that of the explosion which devastated Beirut in 2020.  Samuels and the workers were vindicated, but RDM continues even today to shed its hypocritical “crocodile tears”.

It was publicly reported in the media back in 2019 that the Department of Labour had recommended that RDM should be prosecuted for criminal negligence.  Yet, those Labour Department reports on investigations remain suppressed.  Even now, four years after the explosion, the families and the Macassar community are still denied the findings of these investigations or confirmation that RDM will actually be prosecuted for criminal negligence.

Rheinmetall is a German arms company with a scandalous history.  It flouted the 1977 United Nations arms embargo against apartheid by shipping an entire ammunitions factory to South Africa to manufacture munitions for the apartheid government.  At the instigation of the US Central Intelligence Agency (CIA), it also exported 155mm artillery shells to Saddam Hussein’s Iraq for use against Iran during the eight year war that followed the 1979 Iranian revolution.

Even today, Rheinmetall deliberately locates its production in countries such as South Africa where the rule of law is weak in order to evade German arms export regulations.  Given that South Africa is not a member of NATO and thus also in violation of German law, RDM even proudly boasts that it manufactures and exports its NATO standards munitions from South Africa.

A 96 page report released last year here in Cape Town by Open Secrets and entitled “Profiting From Misery” details RDM’s exports of munitions to Saudi Arabia and the UAE.  The report exposed South Africa’s complicity in the disastrous Yemeni humanitarian catastrophe.  Is RDM’s management proud or ashamed of the devastation it helped to inflict on the people of Yemen?

In defiance of that report, RDM is again expanding.  It is reported by Defenceweb to be busy producing those NATO grade munitions for export to Europe.  It is  reported from Canada that NATO grade 155mm artillery shells were recklessly used by the Ukrainian army to bombard the nuclear power station at Zaporizhzhia, which is now occupied by the Russians.

Did those 155mm artillery shells originate here at RDM in Macassar?  If so, the National Conventional Arms Control Committee yet again has been grossly derelict in not enforcing the NCAC Act.  That legislation stipulates South Africa will not export armaments to countries that abuse human rights and/or to regions in conflict.

The US and its NATO allies have poured tens of billions of dollars of weapons into Ukraine.  Investigations by Amnesty International and others indicate that 70 percent of those weapons poured into Ukraine have been diverted to the arms trade’s international black market. No less than Transparency International — citing a CIA study — estimates that 40 to 45 percent of global corruption relates to the arms trade.   In short, is the NCACC – and in contradiction of our government’s policy regarding the Ukraine war — yet again “closing its eyes” to South Africa’s disgraceful involvements in the war business?

Here in Macassar, the community still has not forgotten the traumas of the 1995 fire at the adjacent AE&CI dynamite factory.  As acknowledged in Parliament by a former Denel CEO back in 2004, it is totally untenable to locate an ammunition factory in a residential area, and consequential environmental contamination.

Will RDM bear the financial costs of decontamination that can be expected to run into billions of rand?  And what about the health consequences of an ammunition factory in their midst  for the residents of Macassar, as well as workers?  Anecdotal evidence indicates that the incidence of cancers amongst both workers and Macassar residents is exceptionally high.

The Khaya-Plain and Districts Anti-Pollution Coalition was successful in 2007 in closing down Denel’s Swartklip plant between Michell’s Plain and Khayelitsha.  Inexplicably, Denel was then permitted by our national government and Cape Town City Council to move its munitions production to Macassar.

That the polluter must pay for decontamination is a globally acknowledged financial obligation. As illustrated by Denel’s irredeemable insolvency despite huge government subsidies, the grotesque notion of Killing foreigners for profit in Yemen or Ukraine or other countries is not economically viable.

Accordingly, this huge area of land urgently needs to be decontaminated at Rheinmetall’s expense, and then repurposed to create more and better jobs than the war business.  Will Public Enterprises Minister Pravin Gordhan, Premier Alan Winde and Cape Town Mayor Geordin Hill-Lewis continue their shameful conduct, or will they now finally open their eyes to their obligations to the community of Macassar?

We had about 100 people present – family members plus Macassar residents — at the memorial service.  There will be another event on Monday when the family members (only) will be taken to the site where the explosion occurred.

Given suppression of the Labour Department report into its public hearings last year into the explosion, we are now preparing an application under the Public Access to Information Act  (PAIA) to demand release of the report to the families. Previous media reports suggested that the Labour Department had recommended that RDM should be prosecuted for criminal negligence.

RDM now occupies the Armscor, Somchem site which was one of the key South African armaments plants during the apartheid era.  Operations at Somchem included development of depleted uranium, an ammonium perchlorate (APC) unit to produce APC as an ingredient in rocket fuel, and a test range for 155mm artillery shells for the G5 and G6 artillery which, to this day, still have the longest range of over 70 kilometres.

The G5s and G6s howitzers were designed by Gerald Bull to deliver tactical battlefield nuclear weapons and, alternatively, chemical and biological weapons.  Another nearby Armscor plant, Houwteq focussed on adapting state-of-the-art US missile technology (supplied to apartheid SA via a CIA front company, International Signal and Control corporation which was headquartered in Harrisburg, Pennsylvania).

In turn, this missile and air defence technology (also facilitated by the CIA as a part of the Iran-Contra scandal) was also sold on to Iraq during the Saddam Hussein era when the arms-for-Iraqi oil trade between SA and Iraq amounted to $4.5 billion.  Then, during the first Gulf War in 1991, the US was surprised by the sophistication of Iraqi air defences and tracked it back to Somchem and Houwteq.  The US then moved quickly to close down Houwteq and most of Somchem, but we still do not have disclosure of what actually went on there. Of course, after 1991 no country (especially the US) wanted to admit that they had poured weapons into Saddam Hussein’s Iraq for use against Iran.