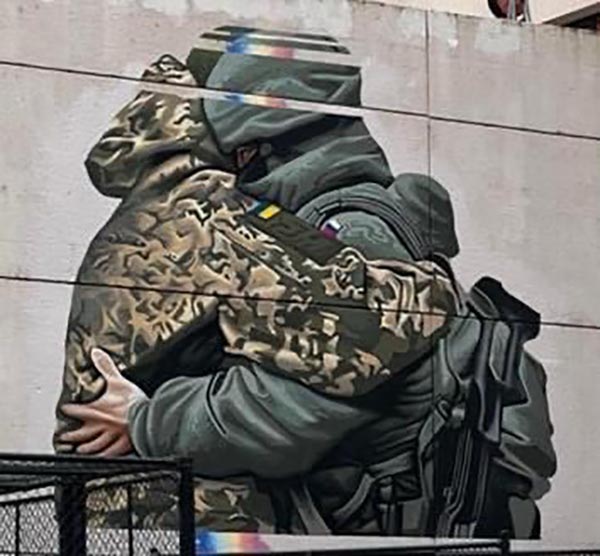 The headline showing up around Australia reads: “Artist to paint over ‘utterly offensive’ Melbourne mural after Ukrainian community anger.”

The mural, by an artist who was apparently raising funds for World BEYOND War (for which we thank him), depicts a Russian and a Ukrainian soldier hugging. Presumably, it could be replaced with a tasteful depiction of one of them carving out the other’s insides with a knife and all would be well.

Some, however, want the Ukrainian and Russian flags removed, so that the mural can be an image for peace, as long as it’s not peace anywhere where there’s, you know, a war.

Mostly, the response reported seems to be that of Ukrainians claiming it’s Russian propaganda, just as presumably Russian war supporters would claim it was Ukrainian propaganda. This nuttiness is at such a level that the artist is pleading to be comdemned as a naive hippie fool rather than falsely accused as a war propagandist for whichever side the war-fever victims are not on.