How We Got The Bikini And Learned To Hate The Bomb 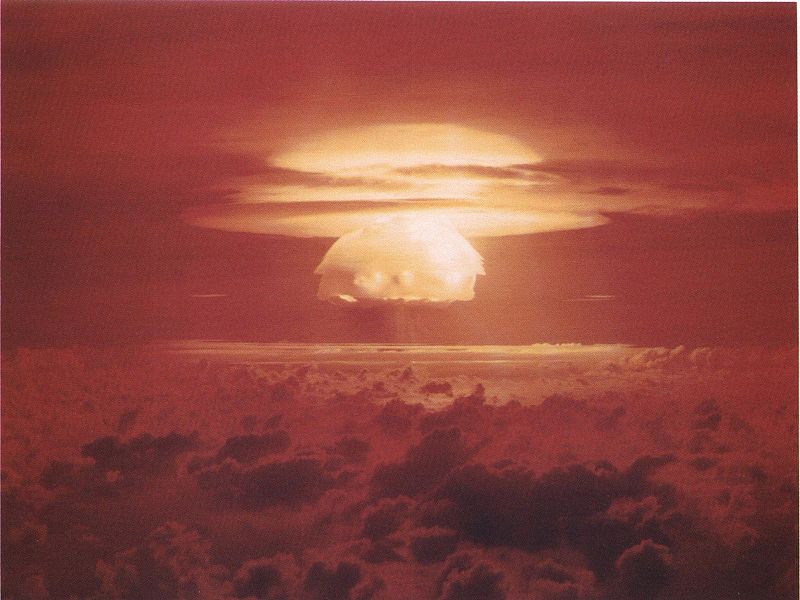 On March 1, 1954, the U.S. Atomic Energy Commission and the Department of Defense exploded a huge thermonuclear bomb on Bikini Atoll in the Marshall Islands, where they had been testing bombs since 1946. Between 1946 and 1958, the United States detonated 67 nuclear bombs in the Marshall Islands — vaporizing entire islands and exiling hundreds of people from their homes.

One peculiar legacy of the U.S. nuclear testing was the introduction of the “bikini” swimsuit, named after the first two nuclear tests on Bikini atoll. French fashion designer Louis Reard hoped his new swimsuit sensation would cause the same reaction as when people first saw the mushroom clouds of atomic bombs. Other legacies of this nuclear destruction are not so pleasant to look at.

The designers of Castle Bravo seriously miscalculated the yield of their “device.” They predicted it would yield between five and six megatons (a megaton is equivalent to one million tons of TNT). Scientists were shocked when Castle Bravo produced an astounding 15 megaton yield, 1,000 times as powerful as the U.S. nuclear weapons dropped on Hiroshima and Nagasaki.

This fearsome blast resulted in massive radiation contamination, in the Marshall Islands and as far away as Guam, 1,200 miles away. U.S. authorities later cleaned up contaminated soil on Enewetak Atoll, where it had detonated the bulk of its weapons tests, and where it had also conducted a dozen biological weapons tests and dumped 130 tons of irradiated soil from the Nevada testing site. It then deposited the atoll’s most lethal debris and soil into a huge dome, which locals call “the Tomb.” The dome is now at risk of collapsing from rising seas and other effects of climate change.

As the nuclear testing occurred, the Marshallese were not informed of the potential dangers. A Senator of the Marshall Islands Parliament, Jeton Anjain, explained the effects of Castle Bravo, “Five hours after detonation, it began to rain radioactive fallout at Rongelap. The atoll was covered with a fine, white, powder- like substance. No one knew it was radioactive fallout. The children played in the ‘snow.’ They ate it.”

Many Marshallese have suffered from forced relocation, burns, birth defects, and cancers. Researchers have conducted numerous studies on the health effects of nuclear tests conducted by the U.S. in the Marshall Islands. In 2005, the National Cancer Institute reported that that the risk of contracting cancer for those exposed to fallout was greater than one in three. Many adults developed cancerous thyroid nodules, two or three decades after the testing ended. In 2010, the National Cancer Institute suggested that up to 55% of all cancers in the northern atolls are a result of nuclear fallout.

Tony deBrum, the former Foreign Minister of the Marshall Islands, argued that the U.S. nuclear test victims “have been taken from us before their time,” so the U.S. could learn more about the “effects of such evil and unnecessary devices.”

“Our people have suffered the catastrophic and irreparable damage of these weapons, and we vow to fight so that no one else on earth will ever again experience these atrocities. The continued existence of nuclear weapons and the terrible risk they pose to the world threaten us all.”

As a boy, de Brum was unavoidably a witness to several of these tests, including Castle Bravo. He and his family lived about 200 miles away, on Likiep Atoll. He was nine years old. He later described it thus: “No sound, just a flash and then a force, the shock wave . . . as if you were under a glass bowl and someone poured blood over it. Everything turned red: sky, the ocean, the fish, my grandfather’s net.

“The Sun Rose in the West”

“People in Rongelap nowadays claim they saw the sun rising from the West. I saw the sun rising from the middle of the sky. . . . We lived in thatch houses at that time, my grandfather and I had our own thatch house and every gecko and animal that lived in the thatch fell dead not more than a couple of days after. The military came in, sent boats ashore to run us through Geiger counters and other stuff; everybody in the village was required to go through that.”

The Rongelap Atoll was inundated with radioactive fallout from Castle Bravo and rendered uninhabitable. “The Marshall Islands’ close encounter with the bomb did not end with the detonations themselves,” de Brum said more than half a century later, in his 2012 Distinguished Peace Leadership Award acceptance speech. “In recent years, documents released by the United States government have uncovered even more horrific aspects of this burden borne by the Marshallese people in the name of international peace and security.”

These included the natives’ deliberately premature resettlement on contaminated islands and the cold-blooded observation of their reaction to nuclear radiation, not to mention U.S. denial and avoidance, for as long as possible, of any responsibility for what it did.

In 2014, Foreign Minister deBrum was the driving force behind an extraordinary initiative.  The Marshall Islands, which had gained independence in 1986, filed lawsuits, both in the International Court of Justice and U.S. federal court, against the nine nations that possess nuclear weapons, demanding that they start living up to the terms of Article VI of the 1970 Treaty on the Non-Proliferation of Nuclear Weapons, which includes these words:

“Each of the Parties to the Treaty undertakes to pursue negotiations in good faith on effective measures relating to cessation of the nuclear arms race at an early date and to nuclear disarmament, and on a treaty on general and complete disarmament under strict and effective international control.”

The lawsuits brought by the Marshall Islands government and the Nuclear Age Peace Foundation were dismissed on legalistic grounds, more or less amounting to “nuclear weapons are above the law.”

Mr. deBrum, who helped gain his nation’s independence from the United States in 1986 — and then helped sue the United States for allegedly breaching an international treaty on nuclear nonproliferation — died of cancer on Aug. 22, 2017 in Majuro, the capital city of his Pacific island nation. He was 72. His death was announced by Hilda C. Heine, the president of the Marshall Islands:

“He fought for our independence, he fought against the tyranny of nuclear weapons and for nuclear justice for our people, and he led the international fight against climate change,” Heine said in a statement. “The very existence of the Paris agreement owes a lot to Tony deBrum.”

“I wonder how many in this room have actually witnessed a detonation of a nuclear weapon,” Mr. deBrum said to 191 nations in the U.N. General Assembly hall in April 2015, when he was the republic’s minister of foreign affairs. He paused for effect, then continued: “I have.” The Marshallese people “still carry a burden which no other people or nation should ever have to bear.”

Previously classified documents reveal that the U.S. performed dangerous experiments on some Marshallese to learn how radiation damages the human body. Over the course of four decades and 72 research trips to the islands, U.S. medical teams examined the Marshallese using X-rays and photography, and took samples of blood, urine and tissue. Some Marshallese were even injected with radioisotopes and subjected to experimental surgery. Since that time, the U.S. government has formally recognized some of the harm caused by the bombings, and it has provided minimal health care and government assistance on the Marshall Islands. But those programs aren’t available to Marshallese who have migrated to the United States.

Today, there are more than 23,000 Marshallese living in the U.S., with communities in Arkansas, Washington, Oregon and California, as well as in Hawaii. They were able to migrate because of an agreement made between the Marshall Islands and the U.S. — the Compact of Free Association. The Compact allows Marshallese to work and live freely on U.S. soil for as long as they want, but does not convey citizenship.  Because of their unique migration status, several states are denying Marshallese access to Medicaid. Marshallese communities in the U.S. remain poor and isolated, and too often face discrimination and bullying.

To say that the Marshallese have been used and abused by U.S. militarism would be a gross understatement.  The bombing of their islands and destruction of their environment and health are gross human rights violations and continuing crimes.  The men, women and children of the Marshall Islands have been treated as sub-human guinea pigs, and then discarded with little care or concern.  It is all the more outrageous that their mistreatment continues to this day – in their home islands and in the United States, where they are denied meaningful reparation or even adequate healthcare.

To make matters worse, the Marshall Islands are gradually disappearing underwater, claimed by the rising seas of global warming.  People all over the globe are also rising up to meet the challenges of climate catastrophe.  The movement to abolish nuclear weapons is also growing. The UN Treaty on the Prohibition of Nuclear Weapons went into effect on January 22, 2021.  This is a watershed moment for peace-loving people.

March 1, the date of the Castle Bravo detonation, is a national holiday in the Marshall Islands.  It is called “Nuclear Victims Remembrance Day” or just “Remembrance Day.” Some Marshallese actually call it “Bikini Day,” but not after the revealing swimwear. Those of us in the United States must remember what our government has done in our name.  We must take better care of past victims of nuclear testing.  And we must do all we can to prevent a nuclear war that would claim many millions more. Before it is allowed to destroy human civilization, we can – and we must – bring an end to nuclear weapons and war.

March 1 Events: A 24-hour Round the World virtual commemoration will take place on March 1; also Youth Fusion Elders, an intergenerational dialogue on nuclear abolition. The crew of the historic anti-nuclear sailboat, Golden Rule, a project of Veterans For Peace, has invited Marshallese leaders to sail with them in Honolulu Bay on March 1, Nuclear Victims Remembrance Day.

Gerry Condon is a Vietnam-era veteran and war resister, a longtime antiwar activist, and a former president of Veterans For Peace. He can be reached at gerrycondon@veteransforpeace.org.