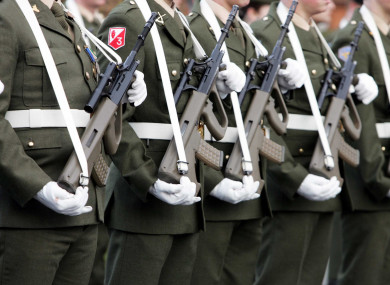 This Friday a decision will be made in Dail Eireann to join a new EU military structure called Pesco, that will dramatically increase military spending and further erode Irish neutrality, without any public debate, using the cover of the current Brexit drama. This will mean a dramatic increase in Irish Defence spending from the current level of 0.5% (€900 million) to close to €4 billion annually.

This would commit Ireland to taking billions away from solving the current housing and health emergencies to spend on weapons. According to the Peace and Neutrality Alliance (PANA), it’s absolutely outrageous that this is being done without any serious public debate whatsoever. It really looks like the government may have done a cynical deal with the EU that, in exchange for European support on the Brexit negotiations, Ireland will sign up to a deal that involves us in a plan to advance the project of a European Army, increasing arms expenditure and significantly strengthening the European Military Industrial Complex.

NATO Secretary General Jens Stoltenberg has said that Germany and other European nations should increase their defense budget. He said the increase was not about pacifying Donald Trump, but a matter of geography. “I’m a firm believer of stronger European defense, so I welcome Pesco because I believe that it can strengthen European defense, which is good for Europe but also good for NATO,” Stoltenberg said.

Germany and France are the main propagators of this European Army, as former colonial powers they see the benefits, for their military industrial corporations, and for access to cheap gas, oil, minerals and slave labour as they police the developing world. Both nations participated in the illegal invasions and destruction of Yugoslavia in 1999, and Syria in 2011, portrayed by corporate media as ‘humanitarian’. Recently French President Macron called for a second ‘humanitarian’ invasion of Libya. Today over 6,000 troops from the US, France and Germany are spread across Africa in yet another scramble for their resources.

Here’s a petition against the involvement of Ireland in a European Army.
https://my.uplift.ie/petitions/no-to-ireland-supporting-a-military-force-in-the-eu?bucket&source=facebook-share-button&time=1512581046