Anti-Drone Activists Blocked Gate to Beale AFB with Life-Sized Figures of Drone Victims
Four Arrested While “Putting A Human Face” on Recent Civilian Drone Victims in Afghanistan
Two Others Were Arrested Monday While Sprinkling Ashes on the Base to Represent Innocents Incinerated by Drone Missiles.

Anti-drone activists blocked traffic at the Main Gate into Beale AFB for over 30 minutes today during early morning commute hour.  They stood across the gate entrance holding life-sized cardboard replicas of the 15 drone victims killed during a Sept. 27, 2016 U.S. drone strike in Eastern Afghanistan.  As traffic backed up behind the blockade, activists read the name, age and occupation of each of the 15 Afghan Civilian men who were killed that night while sleeping in their beds in Achin district, Afghanistan. The men had been gathered to welcome a friend/relative returning from his hajj, or sacred pilgrimage to Mecca.  13 others were injured in the drone attack. The drone deaths included a 26 yr. old teacher,  a 70 yr. old village elder, a 30 yr. old principal, and laborers and farmers of varying ages, as well as a 17 yr. old youth according to a human rights organization based in Afghanistan.  Activists were trying to humanize the lives of the victims that are so often kept anonymous by the media.  Many of the activists gave heartfelt personal statements to the base personnel that witnessed the action. Four activists were later arrested for trespassing as they entered the base.  One was trying to deliver a group letter to the base commander, expressing opposition to the unlawful drone assassination program.
Yesterday afternoon, two days before Ash Wednesday, 2 other activists were arrested while sprinkling ashes on the base to symbolize the ashes of the innocent people in faraway lands incinerated by remotely controlled drones.  All those arrested on Mon. and Tues. were cited and released the same day.  Northern California activists, incl. CODEPINK and Veterans for Peace members, gather at Beale AFB monthly to oppose the U.S. drone killing and the state of perpetual wars perpetrated by U.S. foreign policy.  Beale controls the Global Hawk surveillance drone which is integral to the secretive and unlawful targeted killing program.
Today’s Arrestees:  Flora Rogers, Mike Rufo, Pamela Osgood, and Toby Blomé
Yesterday’s Arrestees:  Sharon Delgado and Shirley Osgood
Scroll Down for Photos.  More photos also  here.  and here.
Over 40 copies of this letter was distributed to base personnel, including Commander:

We come to Beale monthly to express our opposition to the U.S. drone targeted killing program and the state of perpetual warfare that the U.S. is executing globally. As many of you know, the Global Hawk surveillance drone plays a key role in the remote killing program, by doing surveillance over vast areas of the globe and assisting in tracking and identifying potential “targets/suspects.”  Drone operators and analysts stationed at Beale are directly involved in drone attacks and see the carnage on the screen on a daily basis.  This takes a serious toll on their lives as well, leading to high rates of PTSD, and even suicide.

The state of perpetual wars in Afghanistan, Iraq, Syria, Yemen, Pakistan, Somalia, Libya, and elsewhere is a huge global tragedy causing great grief to millions of lives in these countries in terms of displacement, death, serious injury, loss of family wage earners, destabilization of governments, a huge global refugee crisis and much more.  The single recent U.S. military encroachment in Mosul, Iraq is reported to be causing the displacement of over 450,000 lives.  How can anyone call these policies, that cause such vast suffering, successful or humane?

There are three recent incidences that we want to call your attention to:

(Achin District, Eastern Afghanistan) Dozens of men were gathered to honor a friend/relative who had returned from his hajj, or pilgrimage to Mecca, a muslim’s most sacred lifetime achievement.  15 men were killed, and 13 injured. The drone strike hit as they were sleeping in their beds.  According to independent sources, all of the men were civilians.  The U.N. called for a thorough investigation, but to this day we know of no investigation being conducted. Few Americans even know of this incident.  We have managed to get hold of some simple info of these men, whose lives were stolen so abruptly, to honor and memorialize them.  They had every right, as all humans do, to go to sleep at night and awaken in one piece, without threat from aggressive forces.  What message is the U.S. sending to Afghans by so carelessly taking their lives? At the end of this letter you will find the list of names and info of those killed.  Please take the time to look at it, and ask yourself:  Why are we so easily killing these people?

A seriously failed U.S. Navy Seals night raid in a small Yemen village led to disastrous results:  29 civilians killed, including 6 women and at least 10 children. One was a young baby and another an 8 yr. old girl.  Many others were injured. 4 Navy Seals members were also injured and one 36 yr. old Navy Seals, Ryan Owens, was killed.  Ryan was the father of 3 small children. A $75 million Osprey aircraft crashed. Ryan Owens father, who is a veteran himself, said, “Don’t hide behind my son’s death to prevent an investigation.  I want an investigation.  The government owes my son an investigation.”   Sadly, atrocities committed during wartime are rarely investigated.

We mourn the senseless and tragic loss of these lives.  There was no “imminent threat.”  There was no battlefield, except what the U.S. determined should be made into one.  Just a small Yemeni village.  The same little village that endured another U.S. military atrocity on December 12, 2013. On that grave day the U.S. decided to fire drone hellfire missiles on a wedding convoy.

The groom, 2 of his children and 12 others were killed. The strike was supposedly targeting al-Qaida militants, but was later called “a mistake” by officials.  How many military atrocities must one little village in Yemen endure?  How would you feel if your own town was attacked by a foreign nation repeatedly over several years, killing your women and children?  Where will this lead?  How many schools, homes, health clinics, or college tuitions could be paid for with the $75 million it cost to build one U.S. Osprey?  One Global Hawk costs over $200 million.  How could we better spend our resources?

In the first few days of Trump’s presidency, several U.S. drone strikes struck in Yemen.  Officials claimed that 10 militants were killed.  Were these suspected militants or actual militants?  Did the U.S. know their names, or the story of their lives?  Were they wage earners, students, farmers?  Who were they?  Does the U.S. have the right to execute a person in a foreign country on suspicion alone?  Do our police have the right to shoot and kill a person on suspicion alone?

According to leaked military documents, in a 6 month period alone in Afghanistan 90% of those killed by drones were civilians.  [The Drone Papers, The Intercept]   Is there any success in the continuation of these policies that continue to make more enemies in the world?  If we acted in a way that demonstrated that the value of a person’s life in a foreign country was as valuable as the Navy Seals member, Ryan Owens, who died, would we come closer to the possibility of a lasting world peace?  Please read over the statistics of the Sept. 2016 drone strike in Afghanistan, and ask yourself what you could change or do to help create a world that is safer for everyone.

We of Occupy Beale Air Force Base say: 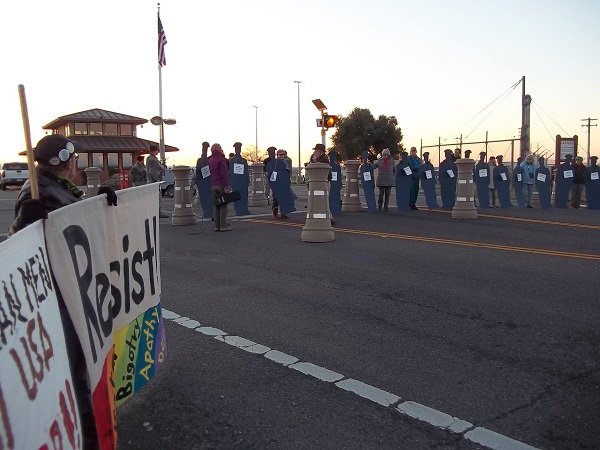 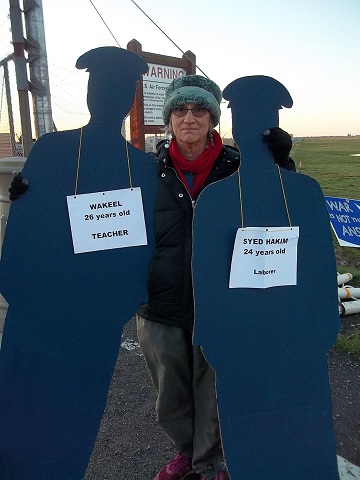 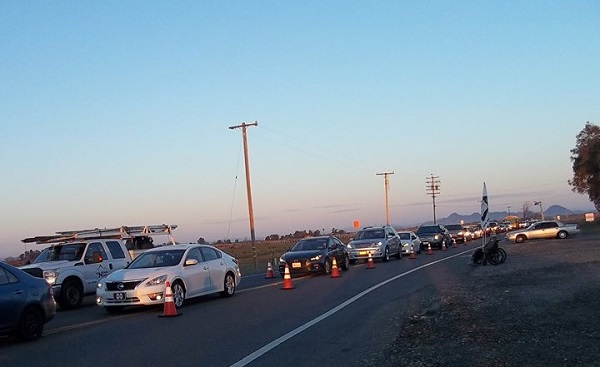 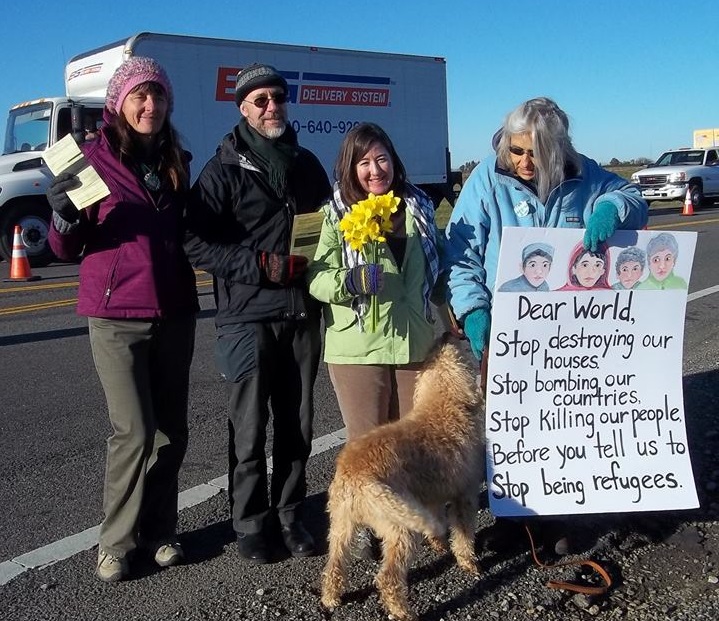