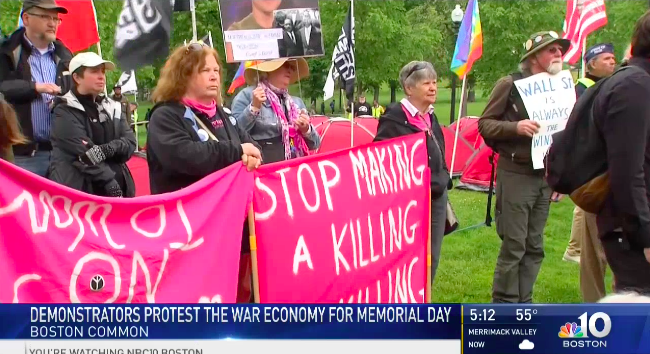 The Poor People’s campaign began with Martin Luther King in 1968 as a way of bringing economic justice to poor people living in the US.  On Monday, the campaign joined forces with Veterans For Peace on Boston Common, with a message for Memorial Day that is also a call to action.

It was a festive atmosphere amid a sea of tents and tourists laid out on Boston Common, but upon closer look, it was clear it was not a party.

Savina Martin, with the Massachusetts Poor People’s campaign, called it a sad day, not a celebration, which brought Veterans, clergy and peace advocates together for nonviolent action to challenge the war economy and gun violence – on a day memorializing those sent off to war.

“Especially the young children who are going into the military from high school thinking that they’re going to live a better life and they come home in body bags,” Martin added.

“Fifty-three percent of the federal discretionary budget is going to war and meanwhile a lot of programs for people who need help are being cut,” said Michael Mclaughlin, a volunteer with the Massachusetts Poor People’s campaign:

Other goals include protecting veterans rights – like the right to hospitalization.

Al Johnson, with Veterans for Peace, is not happy the US has canceled peace talks with North Korea, pulled out of the Iran nuclear agreement and opened a US Embassy in Jerusalem.

“This is well beyond Donald Trump. Look it…  We’ve been out here for Barack Obama, George Bush a whole lot of them and the question of war, we might as well have been on two different planets,” Johnson said.

Tuesday, the protesters will rally at the State House followed by a sit in where protesters say they are prepared to be arrested to have their message heard.