Greetings from Stockholm where I have been taking part in a one day conference on “Making the North a Zone of Peace”, organised by the Swedish Peace Council and the Global Network Against Weapons and Nuclear Power in Space. The Conference was the idea of Agneta Norberg a very active campaigner in the Swedish Peace Council, the Global Network and many other groups. It was also her 80th birthday and so there were many tributes to her amazing work at a party afterwards.

The idea behind the conference was to highlight the growing militarism of the Scandinavian states. Speakers included Bruce Gagnon (USA), Regina Hagen (Germany) and me from the Global Network; Bard Wormdal (Norway) and Kerstin Tuomala (Finland). There was also a panel of commentators – Stig Henriksson, a member of the Swedish Left Party and member of the Swedish defence committee; Ingela Martensson, Women for Peace and Pelle Sunvisson, editor of a prominent Swedish peace newspaper.

Although we often think of these countries as great supporters of peace initiatives with progressive, peace loving governments, actually the governments are no longer that progressive and are being persuaded to join in the US/NATO military exercises and become more and more integrated into NATO military systems. For example, in February and March last year, NATO held its annual 2 weeks of high intensity operations in central Norway – ‘Exercise Cold Response 2016’. This included land, sea and air mobilisations, with military contributions from 12 NATO members and 2 partner nations. 15,000 troops took part and the increasing frequency of these exercises has led to the US establishing storage depots for tanks and amphibious assault vehicles in Norway. 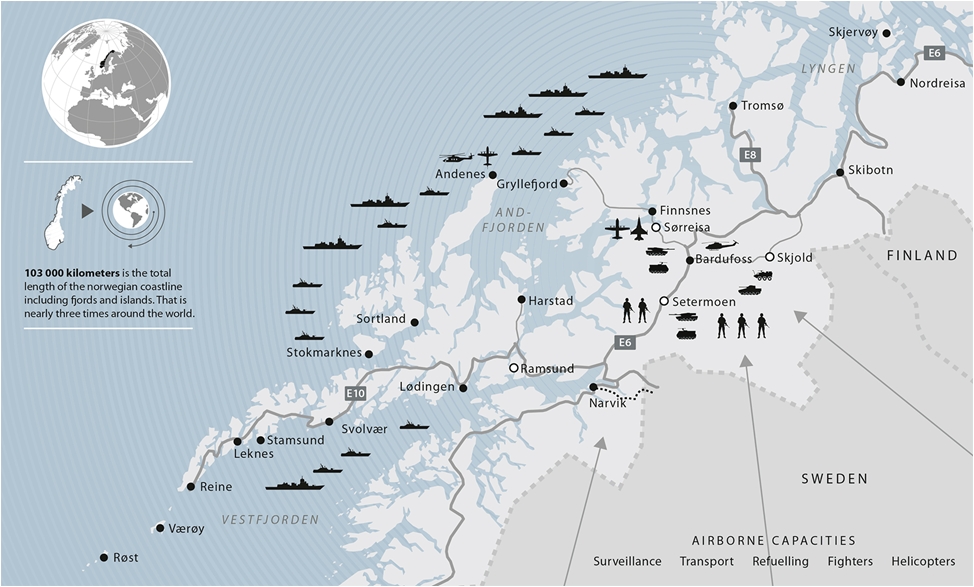 These NATO military exercises are undoubtedly designed to show Russia what the West is prepared to do to ensure access to new sea routes and new resources that become available as the Arctic ice recedes due to climate change. Last July the Swedish government signed an agreement allowing NATO to operate more easily on Swedish territory for exercises or in the event of war. In September, Sweden announced that it was remilitarising the Island of Gotland halfway between Sweden and Latvia in the middle of the Baltic Sea. A permanent garrison is to be re-established there in April and there are calls for NATO to militarise the Finish Åland Islands – which have been demilitarized since the Treaty of Paris ended the Crimean War in 1856. An unofficial agreement between Denmark and the Soviet Union that Bornholm Island would not be used by NATO is also under threat. 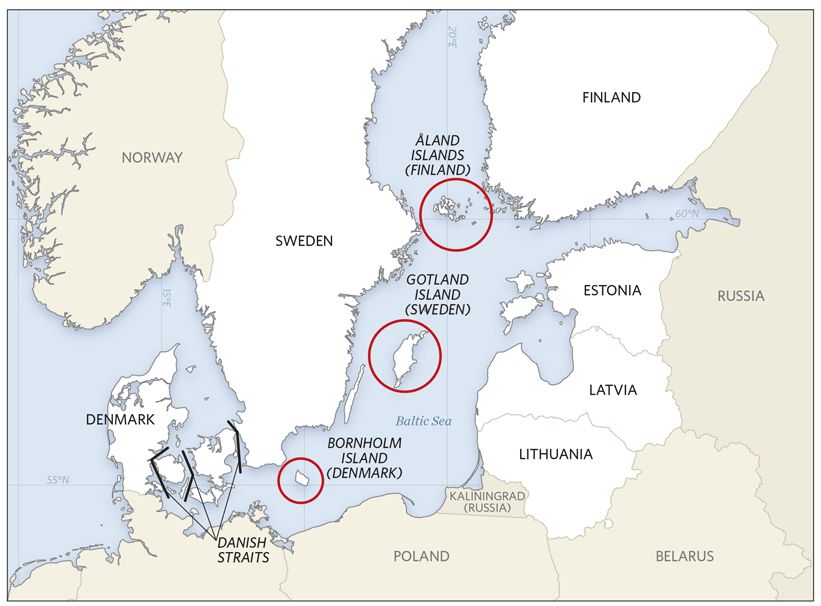 This September Aurora 2017 will be the largest military exercise in Sweden in more than 20 years. The US will be practising how to move troops from Trondheim, Norway to Sweden in the event of escalating military tensions in the Baltic region. An advance guard of US Marines are already being established in Trondheim. But war fighting is not just about troops and tanks and today the military depends on space power. Military commanders and decision makers require information and control – information about targets, troop movements, the weather, etc. and control of the movement of military components, ships, tanks, personnel, drones, etc. and today military operations are informed by and controlled through satellite systems. Global surveillance and photoreconnaissance are also used for planning and also provide opportunities for the military to locate, monitor, track and target any groups or individuals of interest. 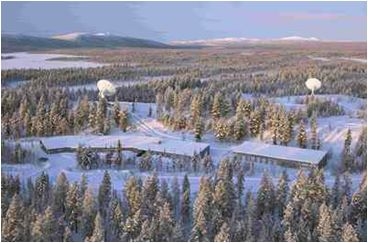 Kiruna satellite station in the north of Sweden is used extensively by the European Space Agency (ESA) with routine operations being fully automated and controlled from the European Space Operations Centre (ESOC) in Germany. Many of these operations have a military application for the US or NATO and many are supported or provided by Swedish companies and the Swedish government. Near Kiruna is the Esrange Space Centre, part of the North European Aerospace Test Range (NEAT) covering 24,000 sq kms in northern Sweden. NEAT is Europe’s largest testing area for aerospace systems and also includes the Vidsel drone and missile Test Range. Esrange is also a large satellite receiving facility through which the military funnels huge amounts of data. 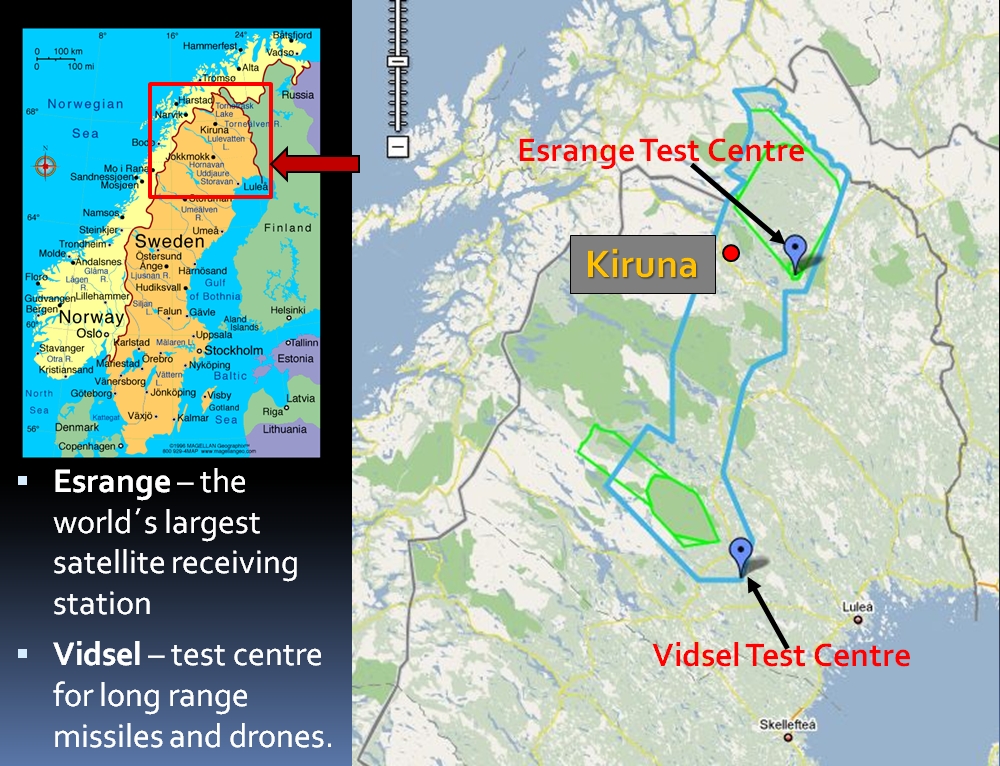 The high latitudes of the Arctic make it an important region for receiving satellite signals as information can be downloaded for all of the daily passes of military satellites that orbit over the polar region. Way up in the Arctic Circle a satellite receiving station has been established by the US and Norway on the Island of Svalbard, which is being used to connect with satellites for military purposes, This actually violates the 1920 Treaty of Svalbard between Russia and Norway, which strictly forbids military operations of any kind from being carried out from the island. The issue of Svalbard and the Svalsat station were highlighted by Bard Wormdal an investigative journalist from Norway who outlined the details in his book “Satellite Wars”. Russia may not be objecting too much to this because of the possibilities of hacking into the system and getting all the information free of charge. 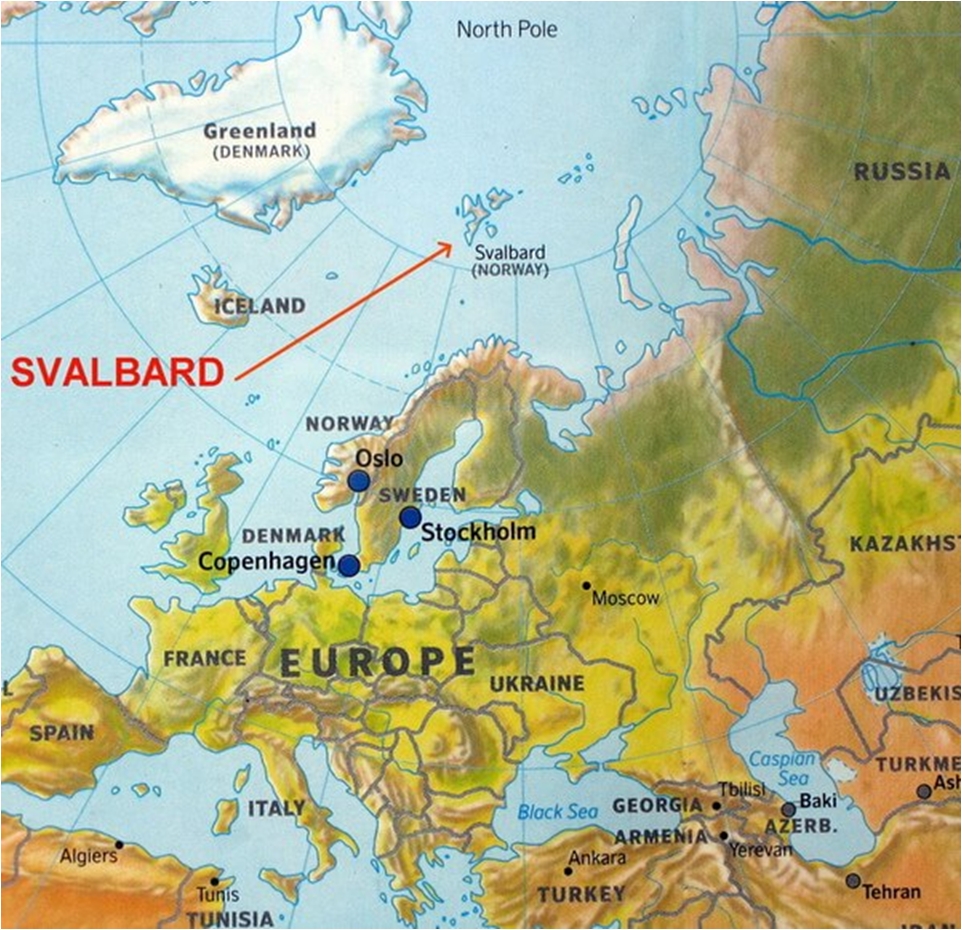 The US military is therefore encircling the globe, in space and on the ground, with satellite and computer network systems. Last year a conference on these issues was held in Vadsø at the northern tip of Norway, close to Vardo which is home to a large US Space Command Radar Station within easy reach of Russia. The conference explored, among other things, the gathering and sharing of SIGnals INTelligence (SIGINT) and COMmunications INTelligence (COMINT) between Norway and the NSA since 1952. These electronic intelligence gathering systems are used extensively and continuously – before, during and after military operations. Sweden is now an important part of the global information gathering network with listening posts at Lerkil, south of Gothenburg and the island of Lovön, near Stockholm. Electronic signals are also intercepted from a ship operated by the Swedish Navy and two Gulfstream IV aircraft operated by the Swedish Air Force. The day before the Stockholm conference about 20 or 30 of us went on a bus trip from Stockholm to visit the FRA/NSA station at Lovön. There wasn’t much to see but we were able to stand there with banners for a while before catching the bus back. 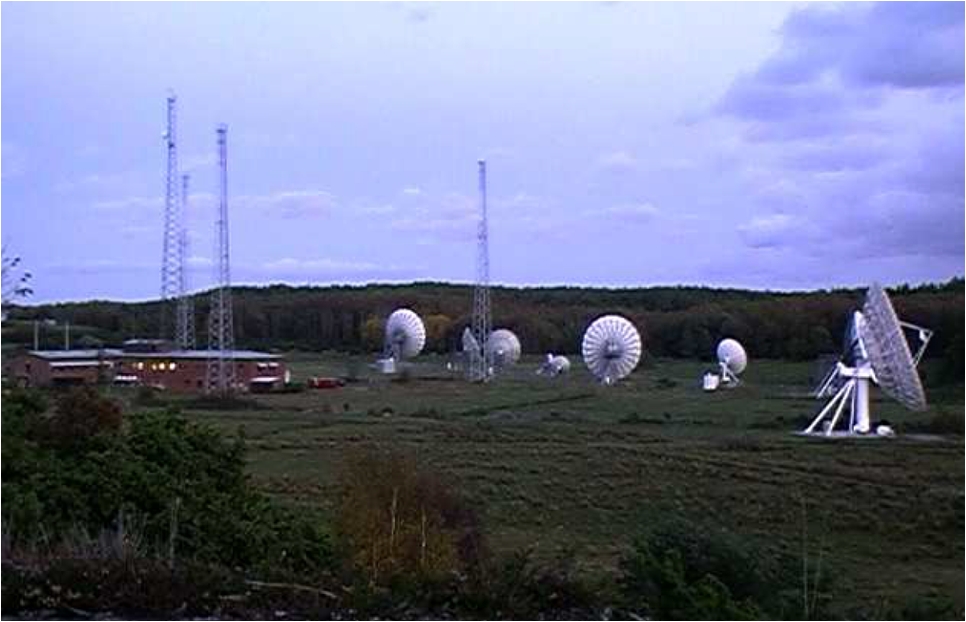 Sweden controls the fibre optic cables through the Eastern Sea and so a third party agreement in surveillance has been entered into with the “Five Eyes” – the US, UK, Australia, New Zealand and Canada – the intelligence gathering and sharing agreement formed in 1949 that Menwith Hill also feeds into. In 2008 the FRA were given expansive powers to intercept all communications travelling over these fibre optic networks into and out of Sweden—including e-mails, text messages, and telephone calls. A large percentage of Russian communications travel through Sweden and surveillance data has been shared with the NSA since 2011, including a “unique collection on high-priority Russian targets such as leadership, internal politics, and energy.”

The Norwegian Intelligence Service (NIS) also works closely with the NSA – and in 2013 was reported as providing it with tens of millions of communications every month – focussing on Russian politicians, military and energy targets in particular. We also heard at the conference in Stockholm that a satellite receiving station at Fauske in Northern Norway has been involved in relaying information on to the US/UK for many years. In 1982, during the Falklands War, it was able to provide valuable information on Argentinian ship movements to the UK that had been intercepted from Russian satellites. At that time the UK and US did not have satellites that could provide this information but the Russians did.

Finland too has a satellite receiving station at Sodankyla which is a downlink facility for the European Space Agency satellite Copernicus which has dual use – military and civilian – capabilities and the government is now discussing its surveillance policy – aimed partly at gaining access to its new undersea cable system called Sea Lion. 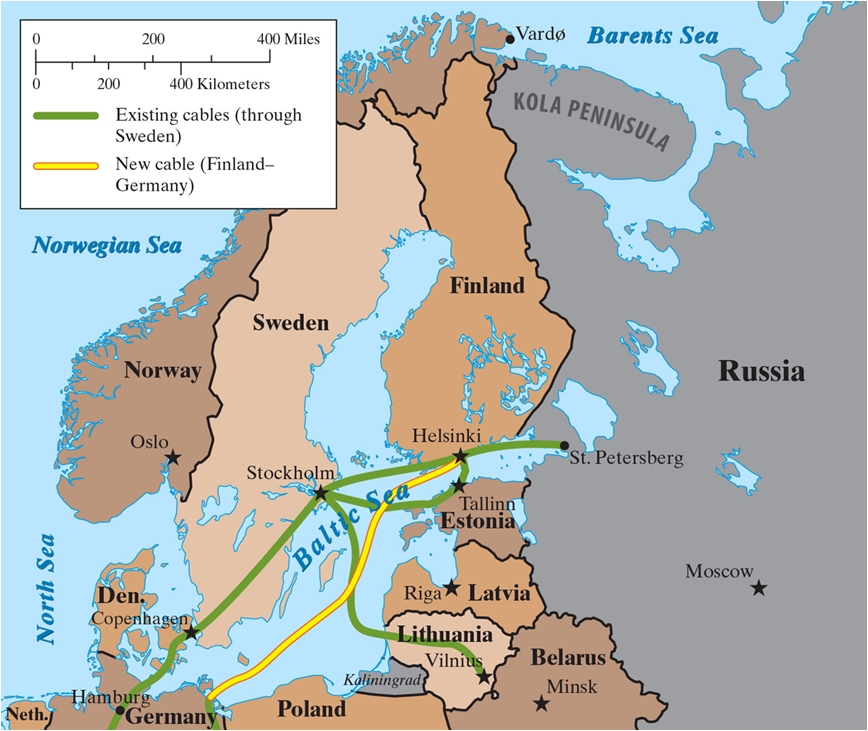 The Baltic Sea is seen by many as a major theatre in a new type of arms race – cyberwarfare. In 2016 in Warsaw NATO agreed to recognise cyberspace as “an operational domain, alongside air, land and sea”. Thus, cyber attacks against NATO countries can potentially trigger an Article 5 military response (an attack on one country is an attack on all) – increasing the possibility of NATO taking collective military action. However, determining the source of cyber attacks is not so easy and technical evidence of them is rarely shared or clarified. Cyberwarfare and hacking techniques are being used not only to attack technical installations but also to plant false information to be used as propaganda by governments, the media and corporate interests and NATO and Russia have accused each other of spreading ‘false news’ to win over public opinion. Sweden is involved in a US cyberwar project called Quantum and one of its operations known as WINTERLIGHT, a joint FRA, NSA and GCHQ project that involves hacking targeted computer systems and with subsequent data interception, diversion and tampering.

In 2014, Latvia, Estonia, Germany, Italy, Lithuania, Poland, and the UK signed a memorandum to establish a StratCom Centre of Excellence in Riga, Latvia – which Sweden joined in 2015. A number of these US/NATO StratComs exist around Europe and Scandinavia and another Centre of Excellence for “Cold Weather Operations” operates in the north of Norway, near Fauske. The western governments and media continue to claim that the increase in US and NATO military activities and the establishment of bases along eastern European and Scandinavian borders is “in response to Russia’s actions in Ukraine and Kaliningrad”. However, Russia sees NATO and the US pushing military bases and escalating aggressive military exercises ever closer to its borders – despite past promises that it would not go there. 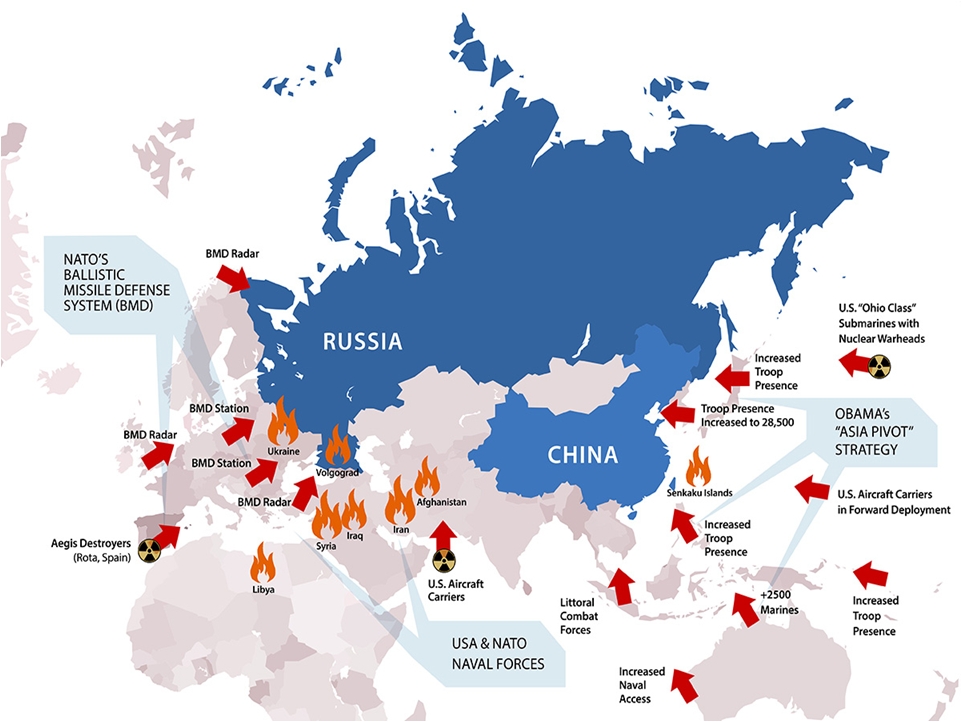 The twin challenges of war and climate change threaten our very existence – to ensure our survival we must adopt ways of working globally through mutual trust and cooperation. The current rapidly changing security context requires a significant international dialogue which looks increasingly unl8ikely at this time. The current dependence on military aggression and intervention to address international problems must be abandoned and all foreign military bases closed. There is a growing awareness of the dangers of global militarisation and a growing resistance but it will require significant international co-operation between opposition groups and some courageous and inspirational world leaders to ensure that we survive the next 50 years or so.