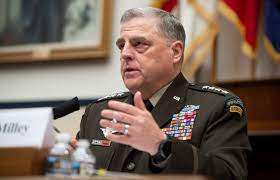 That we should care what the head of the Pentagon says about it in dumb little sound bytes is considered hardly disputable in U.S. society, but I think it should be disputed. The U.S. military is a massive machine for bombing mostly dark-skinned foreign people with different clothing and hair and religion and language. War could not survive without bigotry, and the reverse may be true as well.

The United States, since before it was the United States, has been so deeply afflicted with structural and cultural militarism that it generally goes unnoticed and has to be addressed. “The total influence — economic, political, even spiritual — is felt in every city, every State house, every office of the Federal government,” according to then-President Dwight Eisenhower.

Isn’t that the bomb? Aren’t I killing it? In the war on racism we take no prisoners! This is the language of a society that hasn’t got a clue what it’s talking about but has been conditioned to normalize and idolize war.

The other day a host on Russian TV tried to convince me, a guest, of the need for crazy, massive funding for the U.S. military. The host was from the United States and had previously worked for CNN. The war mania doesn’t just vanish when a new employer stops requiring it. It’s felt in every city, every State house, every brain cell.

Thank you for your service! What service? What the actual — oh forget it. You don’t know who somebody killed or why, and you want to thank them for it? But Critical Murder Theory would be inappropriate?

Imagine if the Congress and White House argued over who possessed greater Lynching Powers. But they dispute “War Powers” all the time. War is no more legal than lynching, but it’s treated by U.S. lawyers as though it can be legal itself and also legalize lynching — at least the lynchings conducted by missile. Lawyers will tell you with a straight face — and some of their best friends are foreigners — that a “drone strike” is murder and absolutely unacceptable unless it’s part of a war, in which case, you know, thank you for your service.

It seems a key Trump advisor was paid and influenced by the UAE, and that’s bad because Trump is a sexist racist jackass and anything about him that can be bad should be. But what about the UAE? Why does nobody care about its role in bribing U.S. politicians? Why isn’t the exposure of such crimes by the UAE or Saudi Arabia or Israel the big deal it would be if the accusation against Russia of leaking Democrats’ emails were finally proven true? Why am I supposed to accuse anybody I disagree with of being paid by Putin, but never hear one word against Sheikh Mohammed bin Zayed Al Nahyan, Crown Prince of the Emirate of Abu Dhabi and Deputy Supreme Commander of the United Arab Emirates Armed Forces (MbZ)?

The short answer is war — and who is buying weapons vs who is serving the critical role of enemy. Also, the United Arab Emirates funds or has funded the Center for American Progress and the Carnegie Endowment for International Peace, as well as the Aspen Institute, the Atlantic Council, the Belfer Center at Harvard Kennedy School, the Brookings Institution, the Center for Strategic and International Studies, and the RAND Corporation. Putin doesn’t.

The New York Times seems to publish a book-length love letter to MbZ about every six months, letting us all know that he may have faults but that one must back dictators in nations where Islamists would win in legitimate elections. I imagine you’re not supposed to be reminded of how necessary and moral it used to be to back Islamists to fend off Commies.

Here’s an actual section headline and text excerpt from the New York Times:

“Most Arab royals are paunchy, long-winded and prone to keep visitors waiting. Not Prince Mohammed. He graduated at the age of 18 from the British officers’ training program at Sandhurst. He stays slim and fit, trades tips with visitors about workout machines, and never arrives late for a meeting. American officials invariably describe him as concise, inquisitive, even humble. He pours his own coffee, and to illustrate his love for America, sometimes tells visitors that he has taken his grandchildren to Disney World incognito. . . . The United Arab Emirates began allowing American forces to operate from bases inside the country during the Persian Gulf war of 1991. Since then, the prince’s commandos and air forces have been deployed with the Americans in Kosovo, Somalia, Afghanistan and Libya, as well as against the Islamic State. . . . He has recruited American commanders to run his military and former spies to set up his intelligence services. He also acquired more weaponry in the four years before 2010 than the other five Gulf monarchies combined, including 80 F-16 fighters, 30 Apache combat helicopters, and 62 French Mirage jets.”

According to the U.S. State Department in 2018, “Human rights issues included allegations of torture in detention; arbitrary arrest and detention, including incommunicado detention, by government agents; political prisoners; government interference with privacy rights; undue restrictions on free expression and the press, including criminalization of libel, censorship, and internet site blocking; substantial interference with the rights of peaceful assembly and freedom of association; the inability of citizens to choose their government in free and fair elections; and criminalization of same sex sexual activity, although no cases were publicly reported during the year. The government did not permit workers to join independent unions and did not effectively prevent physical and sexual abuse of foreign domestic servants and other migrant workers.”

This guy is considered “one of the most powerful men on Earth” by the New York Times and one of the “100 Most Influential People” of 2019 by Time Magazine. He was educated at Gordonstoun, a school in Scotland, and at the Royal Military Academy Sandhurst. He’s built the first nuclear reactor in the UAE with U.S. help and basically none of the U.S. concern or horror that has accompanied Iran’s nuclear energy program. Meanwhile his buddy the Vice President and Prime Minister Sheikh Mohammed bin Rashid Al Maktoum has, according to a British court ruling, been kidnapping and torturing his own daughters. The United States bases troops in the UAE and provides the UAE military with weapons and training.

What could be more perfect or normal or inevitable?

What will the Critical War Theory of 100 years hence say about it, should humanity last that long?