Come Out For #SpringAgainstWar, April 14-15, Everywhere 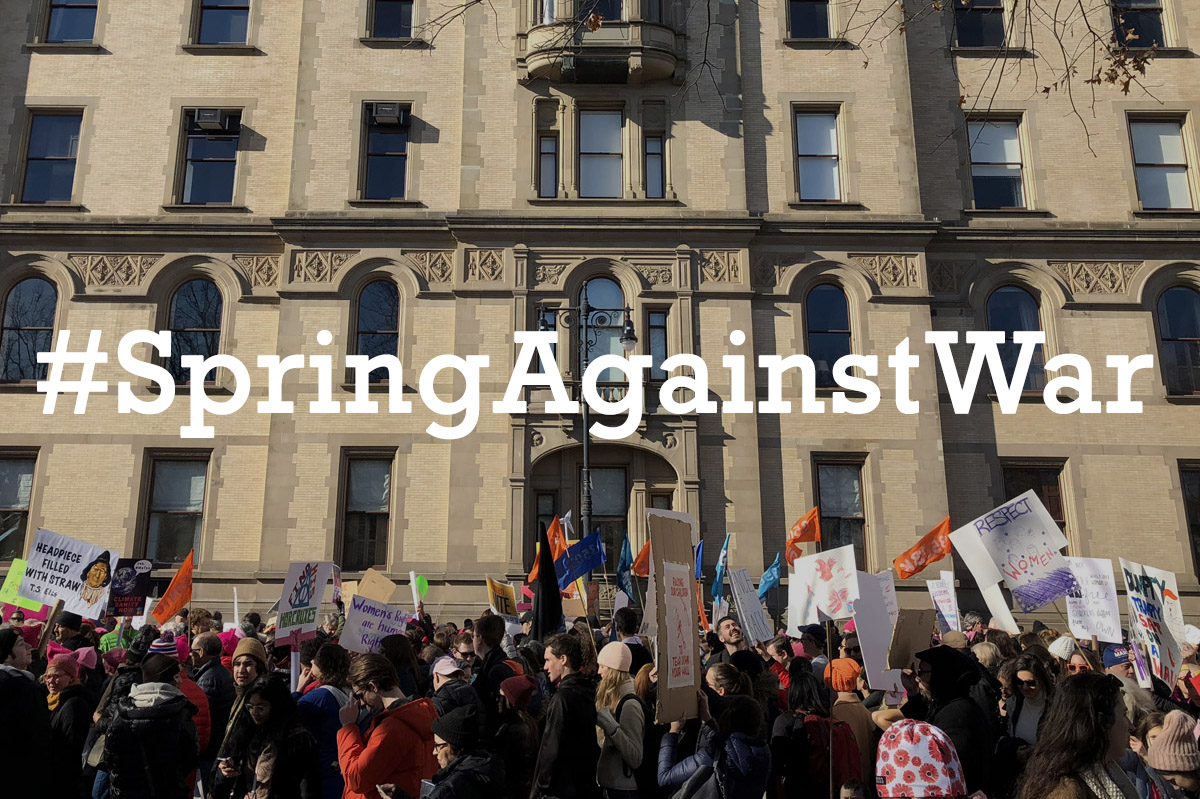 A coalition of peace and social justice groups is calling for a set of major protest actions on the weekend of April 14 and 15, everywhere from large cities like New York, Oakland, Washington DC, Atlanta, Minneapolis and Chicago to smaller actions in Kalamazoo, Buffalo, El Paso, Portland, Maine, Portland, Oregon and Greenwich, Connecticut. Information can be found on SpringAction2018.org and various regional Facebook pages.

The April 14 and 15 action plan was kicked off by a diverse set of activist groups and leaders, led by the energetic United National Antiwar Coalition and the #NoForeignBases movement, but representing a variety of organizations including World Beyond War, Black Alliance for Peace, Code Pink, Veterans for Peace, United for Peace and Justice, Green Party of the United States and many, many more.

This diversity captures the important spirit of cooperation that is keeping our movement alive even amidst the turbulence, confusion and swirling rage that seems to characterize the political mood of our troubled planet in 2018. Some of the groups making up the #SpringAgainstWar coalition are rooted in movements for economic change, or environmental change, or social justice for oppressed minorities. Many are coming to #SpringAgainstWar primarily because they are deeply committed to supporting the victims being assaulted by military forces right now in Syria, Yemen, Palestine, but this deep commitment is also aimed at preventing the next horrifying war planned for Korea, or Russia, or Iran.

Many antiwar activists who will show up at #SpringAgainstWar are thinking about how to dismantle the trappings of empire, like US military bases in Okinawa, while others may be thinking of the militarization of police forces in American inner cities, and about the fetishization of AR-15s and other tools of mass murder that are increasingly advertised and commercialized as expensive toys for paranoid Americans, even as other Americans rally in the streets for sane gun laws. We hope #SpringAgainstWar will carry forward the spirit of the #NeverAgain and #MeToo movements that are drawing so many people into the streets, and towards a greater level of awareness about the problems that plague our societies today, the problems we must find a way to solve.

When we began planning the Spring Actions of 2018, we didn’t yet know that Trump would be bringing the deranged mastermind of the 2003 Iraq War disaster John Bolton to the White House as National Security Adviser. I was at a planning meeting in New York City shortly after this ridiculous announcement was made, and the looks of disbelief on the faces of the tireless organizers of the April 14/15 about this latest insult to the intelligence of the entire world speaks beyond words. As outrages pile upon outrages, we must avoid being discouraged or overwhelmed. We must put aside our small tactical differences and passionate disputes over principles, confusing facts and complex theories that sometimes divide us when we need to stand united.  A coalition march is a great reminder that we all need to stand together to deliver the urgent, common truth that war itself is a fraud, a lie, and a self-perpetuating illness that can be cured.

If you’re feeling hopeless and defeated in the face of everything that’s wrong in the world, #SpringAgainstWar will wake you up to what you always knew: we are determined, we are loud and we will never step down when we stand up to oppression and evil. Come join the Spring Actions of 2018, either Saturday April 14 or Sunday April 15, in big cities or small towns, everywhere in the world and somewhere near you. 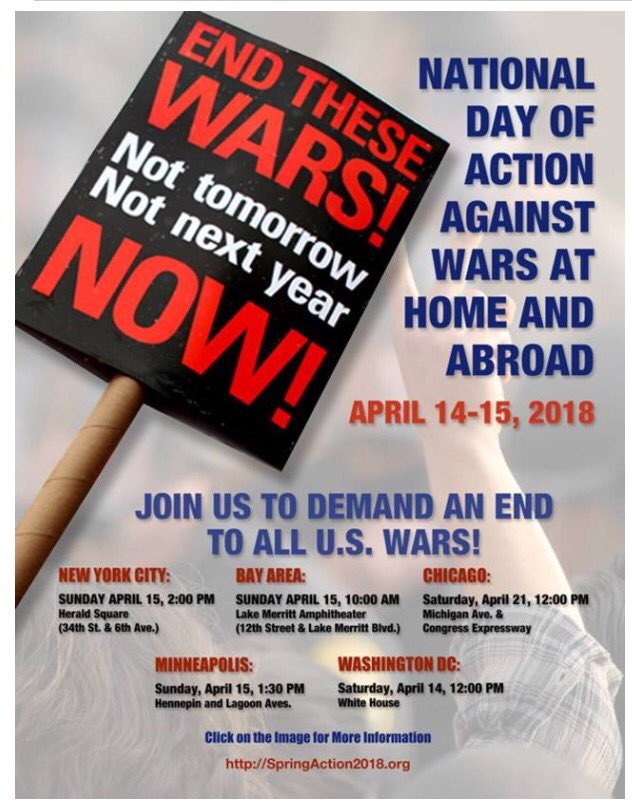