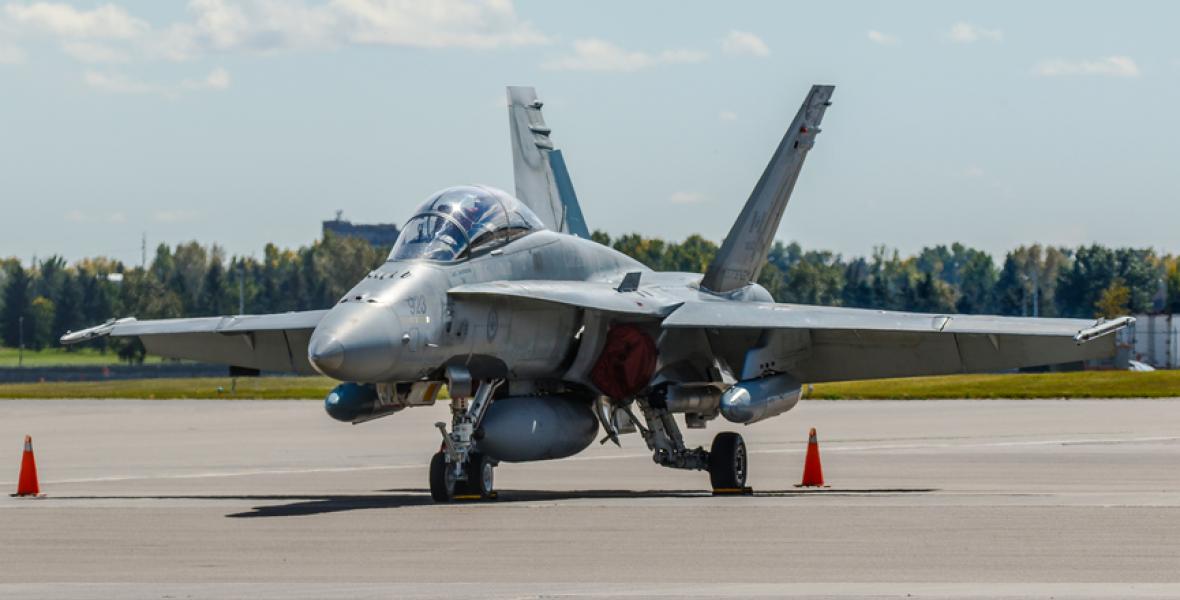 As social movements around the world are calling for the removal of controversial statues, the Canadian military is planning a monument to a warplane at its new headquarters on Carling Avenue in Ottawa (unceded Algonquin territory).

The CF-18 fighter jet will reportedly be mounted on a concrete pedestal as part of the “branding strategy” for their new headquarters.

Along with other installations — including a light armoured vehicle (LAV), like the ones used in Afghanistan, and an artillery gun symbolizing Canada’s involvement in the Boer War in South Africa — the cost of the monuments project will be more than $1 million.

What context should we keep in mind when thinking about a CF-18 monument?

The Royal Canadian Air Force has been extremely secretive about the deaths related to these bombing missions saying, for instance, it has “no information” that any of its airstrikes in Iraq and Syria killed or wounded civilians.

But there are reports that Canadian bombs missed their targets 17 times during the air campaign in Iraq, that one airstrike in Iraq killed between five and 13 civilians and injured more than a dozen, while as many as 27 civilians died during another aerial bombardment by Canadian pilots.

Cholera, the violation of the right to water

The U.S.-led aerial bombing campaign in Iraq targeted the country’s electricity grid, which in turn led to a lack of clean water and a cholera outbreak that may have claimed the lives of 70,000 civilians. Similarly, the NATO bombing missions in Libya debilitated the country’s water supply and left four million civilians without potable water.

Bianca Mugyenyi has also noted that the African Union opposed the bombing of Libya arguing it would destabilize the country and region. Mugyenyi highlights: “An upsurge in anti-Blackness, including slave markets, subsequently appeared in Libya and violence quickly spilled southward to Mali and across much of the Sahel.”

Canadian bombing missions in these countries were facilitated by more than $10 billion in public funds.

The CF-18s cost $4 billion to purchase in 1982, $2.6 billion to upgrade in 2010, and $3.8 billion to extend their lifespan in 2020. Billions more would have been spent on fuel and maintenance costs along with the $1 billion announced this year for its new Raytheon missiles.

An acceleration of climate breakdown

It has also been highlighted the massive impact that CF-18s have had on the environment and the acceleration of climate breakdown.

Mugyenyi has written: “After the six-month bombing of Libya in 2011, the Royal Canadian Air Force revealed its half-dozen jets consumed 14.5 million pounds — 8.5 million litres — of fuel.” To put this in perspective, Canada’s average passenger vehicle uses about 8.9 litres of gas per 100 kilometres. As such, the bombing mission was the equivalent of about 955,000 cars driving that distance.

The 4 Wing/Canadian Forces Base Cold Lake in Alberta is one of the two air forces bases in this country for CF-18 fighter jet squadrons.

Dene Su’lene’ peoples were displaced from their lands so that this base and an air weapons range could be constructed in 1952. Land defender Brian Grandbois has stated: “My great-great-great-grandfather is buried there on a point on that lake where they bomb.”

A monument that literally puts an instrument of war on a pedestal does not prompt a reflection on the civilians and soldiers who die in conflicts. Nor does it reflect the environmental destruction a war machine causes. It doesn’t even suggest that peace is preferable to war.

That critical reflection is important, especially on the part of the estimated 8,500 military personnel at the headquarters who would see the warplane as they go about their work.

As the Canadian government prepares to spend $19 billion on purchasing new fighter jets, we should be having a deeper public debate about the historic and ongoing role of warplanes rather than uncritically immortalizing them.

Brent Patterson is an Ottawa-based activist and writer. He is also part of the campaign to stop the $19 billion purchase of new warplanes. He’s at @CBrentPatterson on Twitter.