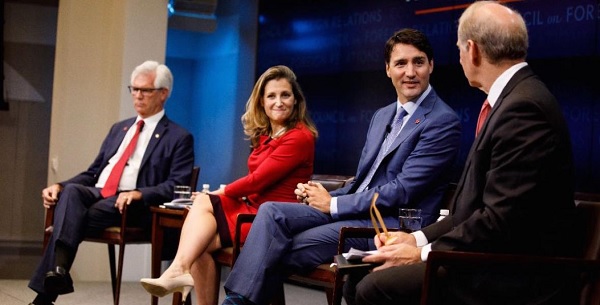 As Canada’s three main political parties prepare for the 2019 election, there is one issue on which they will all agree: there will be no challenge to Canada’s bloated war economy.

While right-wing parties will rail against government waste and improper spending (an attack they usually aim at social programs that on the whole function well and would perform even better if properly funded), the federal War Department receives no such criticism, even when its fiscal mismanagement is well documented.

So infused is the myth of Canadian benevolence on the world stage that no one from the NDP, Liberals or Conservatives will raise a scintilla of dissent regarding the already enormous $20-billion annual investment in an organization that regularly produces questionable financial audits, continues to cover up its role in war crimes such as the torture of Afghan detainees, and treats its veterans with a degree of disrespect that is beyond reprehensible.

To date, no one sitting in Parliament has condemned one of the largest impending thefts from the poor ever undertaken by Ottawa: the immoral and wholly unnecessary $60 billion-plus investment in a new generation of warships. The War Department has already spent over $39 million reviewing bids for the warship contracts, and is seeking an additional $54 million to continue doing so, even as it concedes that it does not know how much the warships will eventually cost (an invitation to corporate entities to charge whatever they please since, in the end, they know Ottawa will pony up). The federal government has already been accused of rigging the bids, given that it appears to be favouring a company linked to Irving Shipyards.

Even assuming such megaprojects are needed — which they most certainly are not — the carelessness with which soldiers’ lives are treated in the process of procuring war materiel is particularly galling. Indeed, during a dispute heard at a summertime trade tribunal, Canada argued that it has absolutely no obligation to ensure that the equipment it purchases actually works. This dispute was in the context of their admitted failure to test recently purchased search and rescue gear for the military and coast guard. The message to soldiers and sailors is clear: we have no responsibility to ensure you have a safe workplace, and when you do get hurt on the job due to our negligence, you will spend years fighting Veterans Affairs to receive benefits.

To help distract from this glaring failure to prioritize child care over warfare and housing over drones and new bombers, the Liberals continue to dance about the global stage as self-proclaimed feminists, from hosting last weekend’s much heralded Montreal gathering of female foreign affairs ministers to the laughable creation of a new ambassador for women, peace and security.

“The new ambassadorial position I announced today is just one step in our ongoing effort to put some meat on the bones of this feminist foreign policy,” Chrystia Freeland said proudly, repeating the mantra about how much her government supports women’s rights as human rights. Yet Freeland continues to approve weapons sales to the world’s most misogynist regimes (USA, Saudi Arabia) and is silent as her own government funds the War Department to the detriment of women.

Indeed, every dollar that goes down the rat hole of militarism is one that could be used to stop the endless murder of women in this land (a woman is now killed every other day in Canada by a man). A coalition of women’s shelters released a new report reminding Canadians that:

“Our goal is to see a Canada where every woman living with violence is able to access comparable levels of services and protection, no matter where she lives. Currently, that is not the case.  Canada currently has a federal strategy on Gender Based Violence. Its reach is limited to the areas of responsibility of the federal government and thus does not seek to ensure that women in all areas of the country have access to comparable levels of services and protection.”

Among the barriers faced by women are “poor legislative protections, insufficient social and housing supports, inadequate funding and increases, deficient data collection and monitoring, and convoluted and overlapping information.” While at the United Nations this week, neither Freeland nor Trudeau addressed why they have failed to implement a UN-mandated national action plan to end violence against women and girls.

While liberal-minded types glowed on Twitter and Facebook about the women’s gathering in Montreal, few pointed out that Freeland’s Swedish and South African counterparts, for example, oversee weapons exports that regularly keep their respective countries in the top ranks of arms exporters.

Beatrice Fihn, executive director of the International Campaign to Abolish Nuclear Weapons, said that calling one’s foreign policy feminist is a “great step, in that it opens up the space for us to come in with specific demands, like: stop selling weapons to Saudi Arabia or sign the Treaty on the Prohibition of Nuclear Weapons.” (Canada refuses to sign the nuclear weapons treaty and continues to stand by its $15-billion weapons sale to the Saudis).

While the Trudeau-Freeland warfare state continues to grow, Ottawa has also announced a “visionary” strategy to reduce poverty by a few percentage points by 2030 (assuming on their part that is it OK to leave yet another generation suffering from hunger and homelessness for another dozen years). But with this strategy, they announced not a single dime in new spending to achieve this goal. While the funds are clearly available to end poverty in Canada tomorrow, the political will simply is not there.

Despite decades of friendly rhetoric about helping those without money, the rate of poverty in this country has been relatively unchanged for the past half century. As Canada Without Poverty points out, almost five million people in Canada are officially deemed to live in poverty.

In 1971, Ian Adams, William Cameron, Brian Hill and Peter Henz — all of whom had resigned from a Senate committee tasked with studying poverty when it became clear that senators were not interested in eliminating the causes of poverty — wrote their own study, The Real Poverty Report. Reminding readers that “to be poor in our society is to suffer the most outrageous kinds of violence perpetrated by human beings on other human beings,” they went on to ask a pertinent question, one rarely addressed by those in political life:

“What are the consequences for a society that claims to have a democratic system, enjoys trappings of wealth and economic power spectacularly beyond the reach of most nations in the world, but allows one-fifth of its population to live and die in a cycle of unrelieved misery?”

They were reminded in their study of Jean-Paul Sartre’s description of the affluent, one that fits perfectly for the Trudeau Liberals, “who have it in their power to produce alterations for the better but instead work assiduously to perpetuate ancient swindles while professing humane goals.” Even in 1971, at a time when Canadian nationalist mythmakers incorrectly labelled Canada a peaceable kingdom, the authors point out that “Canada has over the years allocated more for military expenditure than it has in the area of social welfare.”

While the need for an immediate housing investment and income supports is beyond glaring, monies continue to flow elsewhere, especially to the military. The amazing amount of money thrown away includes a top-heavy bureaucracy, with the number of admirals and generals having grown 60 per cent since 2003 (despite the military itself only growing an estimated two per cent during that time period). Current War Department Chief Jonathan Vance is unashamed abut the number of men strutting about Ottawa with the massive fruit salad on their chests, and he actually plans to expand their numbers even more, especially since Ottawa will invest well over $1 billion in a new facility for the War Department to accompany an $800-million building in the former Nortel campus in the city’s west end.

Ultimately, despite the happy smiles and collegial back slapping for good feminist speaking points, the Liberals and their friends across the aisles in Parliament all continue to reign over a society that, in spending far more on war than on social needs, is approaching, as Martin Luther King Jr. repeatedly pointed out, spiritual death. It might be a good idea before volunteering or donating to these political parties to ask whether one really wants to contribute to that spiritual death.

Matthew Behrens is a freelance writer and social justice advocate who co-ordinates the Homes not Bombs non-violent direct action network. He has worked closely with the targets of Canadian and U.S. ‘national security’ profiling for many years.