Bolivian President Calls for a World Without War 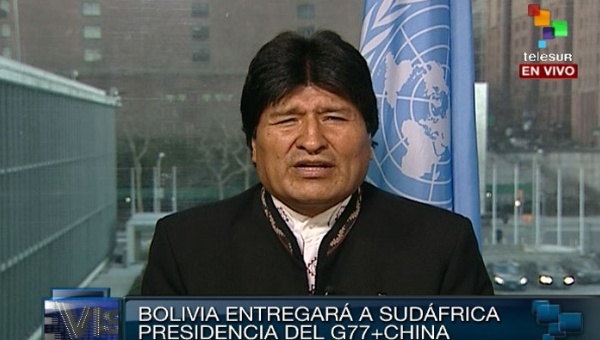 Evo Morales will hand over the presidency of the Group of 77 countries to South Africa today.

Bolivian President Evo Morales called on the world to follow the example of the Group of 77 countries plus China, and prioritize social policies domestically, and respect the principle of sovereignty internationally.

The Bolivian president spoke exclusively with teleSUR Thursday on the occasion of the transfer of the presidency of the Group of 77 countries plus China. President Morales was in New York at the U.N. headquarters to hand the presidency over to his South African counterpart,Jacob Zuma.

In the interview, Morales reiterated previous calls for the defense of countries against foreign interference, and for a “world without war.”

Morales thanked the body for the opportunity to lead the largest group of countries at the U.N., saying, “I feel that under this administration we relaunched the group.”

With Evo Morales as president, the G77 plus China raised its profile dramatically, and strengthened the group of countries ability to present uniform positions at the international level.

“Previously, the empires would divide us in order to dominate us politically,” Morales said.

Under Morales, the G77 placed great emphasis on social policies, something the president called on his successor to continue.

“One of the tasks we have set out for ourselves is the eradication of poverty,” said Morales.

The Group of 77 countries was created in 1964 in order to promote south-south cooperation.