The Basques In Spain: Positive Peace? 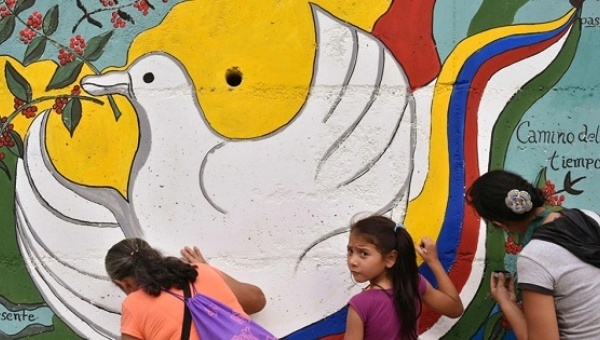 Spain is in a process that will take some time, from “España: Una, Grande, Libre” to “España: Una Comunidad de naciones“—“Spain: One, Great, Free” to “Spain: A community of nations.”  Could also be great and free, but not One; not Castillan, but also Catalan, Basque, Gallego, Andalucian, and the islands, Baleares, Canarias.

ETA (Euskadi Ta Askatasuna)–world famous for killing the successor to Franco, Carrero Blanco, in 1971 possibly shortening the dictatorship by a generation–disarmed, handing over its means of violence, on 8 Apr 2017. ETA is dissolved.  Negative peace, by eliminating one violent party. There was much violence, doing bad things to each other. No more. Then what? Maybe doing good things to each other?  Positive peace is about that.

Economically, concretely that means more enterprises, companies, businesses with Basques cooperating with Castillans, and others.  Easily understood and practiced; one way in which Spain hangs together.  But political cooperation?  Cultural?

The political actors are Basque municipalities, Basque provinces and the Basque nation.  Municipalities and provinces can use twinning, tripling, with Castillan and other municipalities and provinces. “How do you solve more unemployment and delinquency problems given that the crisis eliminates many jobs in such fields?”  No need only to go via the state, the center, Madrid to get official answers from the top. Horizontal political cooperation, at two obvious levels, not top-down.

Culturally the Basques have not been good at communicating Basque culture. In Spain in general, Basque = terrorist. Serving delicious Basque food is fine, but not enough. Tell the rich history, the origins, where? Similar to what? Altamira. Loyola. Iruña, Donostia, Gasteis.

Language.  There is vast difference between knowing nothing and knowing some words, like good morning, good-bye.  Basques should share that and more with the rest of us for more human relations. It breaks so much ice with Russians, a minority in Europe, for instance.

Everything said so far is easily done but mostly undone–and yet indispensable as infrastructure for positive peace between the Basque nation and the rest of Spain. Why not start with language, and at the very top: in the government, and in the parliament?

The multi-national country with a clear model is Switzerland. The 4 nations are divided among the 7 members of the government 3-2-1-1; 3 German-, 2 French-, 1 Italian- and 1 Rheto-romanisch-speaking.  The formula is not proportionate, giving the Germans only 43%, not the 71% they have, to impede one nation from dominating the rest.

For Spain this would call for a formula for dividing a government with, say, 25 members into 6, maybe with 12 Castillans?  Reader, please try: six numbers between 1 and 12, adding up to 25.

But there is more to it.  In the Swiss parliament, in principle, all speak their own of the four languages, and all understand the other three and respond in their own. In Spain that might work for the others, but not for Basque, interpretation would be needed. But the right to speak Basque is non-negotiable. First learn to understand and to read, the passive mode; active speaking and writing can come later.

This would be the Spain of the future, a community of nations according to language, history, geography but not religion, by and large all Catholic; the Basques maybe even more so.  Let us face it: something like this is not only written in the cards, it is doomed to come, to Spain as to others (even France!).  There will be resistance from the nation used to run the country alone; just as well give in.

For the good of the whole country, all the inhabitants, keeping in mind that Switzerland has survived 7 centuries, mainly on this basis.

Spain is today also divided in 17 “autonomías“, a third of 50 provinces; the fewer they are, the easier for the center to dominate. But, what does autonomy mean? To police oneself, not by Guardia Civil recruited from non-Basque provinces. Not only to teach Basque but also to teach, in general, for those who want, in Basque.

But again, there is more to it. Today no country is closed to others but relate more or less to other countries. Autonomy should include foreign relations.  Embassies are for the states, but on the staff of Spanish embassies–and in the foreign office like in other ministries–all nations would be represented. But consulates could also be for the nations if they so want, to represent their own national and individual interests.  A Basque dies abroad; the family may want the whole matter to be handled by Basques, in Basque.

And the Basque nation, easily recognized by RR. The double-R has left its traces in many places. In France of course, in Chile and other countries in Latin America as administrators of the Spanish empire, in the Vatican as Jesuits.  Basque consulates are called for all places.

EU? Not as member state, not being one, but as a major member nation in the EU organ for nations, like Catalans spanning two states.

Will that not tear Spain apart?  Not at all, there are several Spains after all.  Mind the old Chinese saying, in strength (rigidity) there is weakness, in weakness (flexibility) there is strength.

So much for future visions.  There is also a recent past to handle, with traumatized bereaved left behind by ETA. But so did GAL (Grupos Antiterroristas de Liberación), killing ETA militants secretly during the Gonzalez democracy, not openly like under the Franco dictatorship.  Conciliation is easier when both have been in the wrong than with only one evildoer.

Positive peace builds on negative peace building on conciliation of traumas and solution of conflicts.  There is much work to be done.  But Spain as a true community of nations will inspire the whole world.

Johan Galtung, a professor of peace studies, dr hc mult, is founder of TRANSCEND International and rector of TRANSCEND Peace University. Prof. Galtung has published more than 1500 articles and book chapters, over 470 Editorials for TRANSCEND Media Service, and more than 170 books on peace and related issues, of which more than 40 have been translated to other languages, including 50 Years – 100 Peace and Conflict Perspectives published by TRANSCEND University Press. More information about Prof. Galtung and all of his publications can be found at transcend.org/galtung.