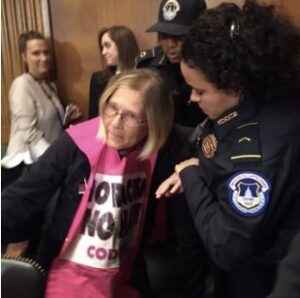 Yesterday on January 31, 2017 I was arrested in the U.S. Senate’s Intelligence Committee hearing on the nomination of Senator Jeff Sessions as Attorney General.  I was charged with “Disruption of Congress.”

Like so many who have been arrested during the confirmation hearings of virtually every nominee of President Trump for every Cabinet position, I felt I had to express my deep concern about Jeff Sessions possibly becoming the Attorney General of the United States.

The night before the hearing, on January 30, Acting Attorney General Sally Yates had been fired by President Trump for her decision that Justice Department lawyers would not defend the Executive Order to stop the entire US refugee program for 120 days, indefinitely ban vetted Syrian refugees and suspend all citizens from Iran, Iraq, Libya, Somalia, Sudan, Syria and Yemen from using valid visas or applying for visas to the United States for the next 90 days.

The two previous days massive demonstrations in every major international airport in the United States to protest the ban had mobilized tens of thousands of Americans and prompted Canadian Prime Minister Trudeau to state that Canada would take all refugees that the United States was refusing to accept.

titled: “Dissent Channel: Alternatives to Closing Doors in Order to Secure Our Borders.”  The memo stated,

“A policy which closes our doors to over 200 million legitimate travelers in the hopes of preventing a small number of travelers who intend to harm Americans from using the visa system to enter the United States will not achieve its aim of making our country safer…  Moreover, such a policy runs counter to core American values of nondiscrimination, fair play, and extending a warm welcome to foreign visitors and immigrants.

We are better than this ban…Looking beyond its effectiveness, this ban stands in opposition to the core American and constitutional values that we, as federal employees, took an oath to uphold…

Decades from now, we will look back and realize we made the same mistakes our predecessors: shutting borders in a knee-jerk reaction instead of setting up systems of checks that protect our interests and our values…

We do not need to place a blanket ban that keeps 220 million people–men, women, and children–from entering the United States to protect our homeland. We do not need to alienate entire societies to stay safe. And we do not need to sacrifice our reputation as a nation which is open and welcoming to protect our families. It is well within our reach to create a visa process which is more secure, which reflects our American values, and which would make the Department proud.”

When asked about the dissent of career U.S. diplomats serving in Washington and in U.S. embassies around the world, White House press secretary Sean said the executive order is about protecting Americans, and he said those diplomats who are objecting “should either get with the program or they can go.”

With these events as background, when I went to the Intelligence committee’s hearing on Senator Jeff Session’s nomination and heard ranking member Diane Feinstein detail Session’s involvement in writing the executive order banning Muslims from seven countries from entering the United States, I felt I had to also object to Sessions’ nomination.  Feinstein quoted the Washington Post http://www.feinstein.senate. gov/public/index.cfm/press- releases?id=A2A58A6E-50A1- 428F-9AA9-FA93691AF2D0,  “‘From immigration and health care to national security and trade, Sessions is the intellectual godfather of the president’s policies. Sessions’ reach extends throughout the White House, with his aides and allies accelerating the president’s most dramatic moves, including the ban on refugees and citizens from seven mostly-Muslim nations that has triggered fear around the globe.’

Feinstein continued with her concerns about Sessions views on voting rights and voter fraud, reproductive choice, punishment of women who chose to have an abortion and waterboarding and other forms of torture.  Feinstein ended her statement with, “I have no confidence that Senator Sessions will be an independent Attorney General.  Instead, he has been ‘the fiercest, most dedicated, and most loyal promoter in Congress of the Trump agenda, and has played a critical role as the clearinghouse for policy and philosophy to undergird the implementation of that agenda.’  With this in mind, I must vote no.

who has been a U.S. Senator for 34 years, said  “What we saw last night illustrates what is at stake with this nomination.  The President’s decision to fire Acting Attorney General Sally Yates is shameful.  And his accusation that she “betrayed the Department of Justice” is dangerous.  The Attorney General is the people’s attorney, not the President’s attorney… Ms. Yates’ willingness to defend the rule of law instead of defending President Trump’s political whims demonstrates exactly why having an independent Attorney General is so important, and why we must be so careful in selecting our next Attorney General.  President Trump has placed the independence of the Justice Department at stake.  He has put the Department on notice: if you adhere to your oath of office to defend the Constitution, you risk your job.

At this critical time we need an Attorney General who can stand up to the President.  Someone with fidelity to the rule of law and not a political ideology.  Someone who will support the thousands of career prosecutors in the Department who serve our Nation and defend the Constitution without fear or favor.”

“I have serious doubts that Senator Sessions would be an independent Attorney General.  There have been months of media coverage about President Trump’s many conflicts of interest and the constitutional concerns they present.  Yet Senator Sessions has repeatedly evaded my questions on this topic by claiming that he has “not studied the issue.”  He even refused to acknowledge that it is a conflict of interest for a President to have a personal financial stake in the policies pursued by his administration.  This is the very definition of a conflict of interest: Presidents should not personally profit from their decisions.

In 2015, I offered a simple resolution that expressed the sense of the Senate that “the United States must not bar individuals from entering into the United States based on their religion.”  All Democrats and most Republicans – including the Chairman – voted in support of my resolution.  Senator Sessions opposed it.  I find that concerning. We need an Attorney General who would stand in the way of religious discrimination, not one who endorses it.  I will vote no.”

With these important statements by Senators who have served in the U.S. Senate for a long time and know him well, buttressed my decision to speak out …and be arrested.  I stood up and said, “I am a retired U.S. Army Colonel and a former U.S. diplomat. I say No Hate, No Racism, No Ban on Muslims and NO Jeff Sessions.”

Many people have been arrested in the other confirmation hearings and more will be in the future as we challenge the dangerous policies of the Trump administration.

About the Author:  Ann wright served 29 years in the US Army/Army Reserves and retired as a Colonel.  She also served 16 years as a US diplomat in US Embassies in Nicaragua, Grenada, Somalia, Uzbekistan, Kyrgyzstan, Sierra Leone, Micronesia, Afghanistan and Mongolia.  She resigned in 2003 in opposition to Bush’s war on Iraq.