April 10 International Day of Solidarity with the People of Odessa 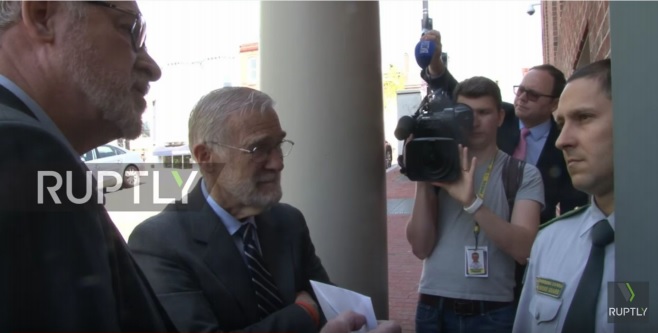 When we rang the doorbell at the Ukrainian Embassy to the United States in Washington, D.C., Ray McGovern and I heard a staff person ask “Who is it?” over the intercom.

“We’re the Odessa Solidarity Campaign and we have a letter for President Petro Poroshenko,” we said. When the door opened, a bewildered-looking man was confronted by what must have seemed to him like a sea of reporters. Plus Ray and myself, with the letter.

“We’re calling on President Poroshenko to release all political prisoners in Ukraine and end the repression against the relatives of the people who died at the House of Trade Unions on May 2, 2014,” we said.

The staff member slowly took the letter as the TV cameras filmed. (The text of the letter appears below.) It was April 10 – the 73rd anniversary of the day the Black Sea city of Odessa, Ukraine, was liberated from fascist occupation. On the same day, copies of the same letter were being delivered to Ukrainian embassies, consulates and honorary consulates in a total of 19 cities in 12 countries across Europe and North America. This International Day of Solidarity with the People of  Odessa was initiated by the Odessa Solidarity Campaign of the United National Antiwar Coalition in response to the recent wave of repression in Odessa.

BACKGROUND TO THE PRESENT CRISIS

On May 2, 2014, less than three months after the right-wing coup that overthrew Ukraine’s elected president, activists in Odessa promoting a national referendum for the right to elect local governors clashed with supporters of the coup. Greatly outnumbered, the federationists took refuge in the five-story House of Trade Unions in Odessa’s Kulikovo Pole (field, or square). The huge mob, whipped into a frenzy by neo-Nazi organizations, pelted the building with Molotov cocktails. At least 46 people were burned alive, died of smoke inhalation or were beaten to death after jumping from windows.  Hundreds were wounded as the police stood by and did nothing. 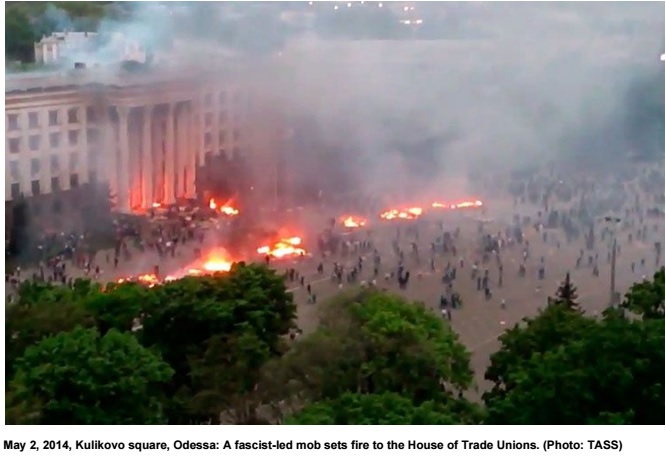 May 2, 2014, Kulikovo square, Odessa: A fascist-led mob sets fire to the House of Trade Unions. (Photo: TASS) Despite the fact that dozens of cellphone videos of the massacre were posted on the Internet, many clearly showing the faces of the perpetrators, to date not one person responsible for the massacre has faced trial. Instead, dozens of those who managed to escape the fire were arrested. Some are still in prison today. Each week since the massacre, relatives of the murdered activists have gathered at Kulikovo square to honor their dead and press their demand for an international investigation into the tragedy, one of the worst civil disturbances in Europe since World War II. Although international organizations including the United Nations and the European Council have tried to investigate, each attempt has been blocked by the federal government.

While the relatives have faced constant harassment by members of fascist organizations such as the notorious Right Sector, a serious new level of government repression was launched Feb. 23 with the arrest of Alexander Kushnaryov, the 65-year-old father one of the young people who died at the House of Trade Unions. Kushnaryov apparently was the target of a sting operation involving the staged abduction of a member of the country’s parliament who had been photographed at Kulikovo square standing over the dead body of Kushnaryov’s son. Also arrested in connection with this alleged kidnapping was Anatoly Slobodyanik, 68, a retired military officer and the head of the Odessa Organization of Veterans of Armed Forces.

The arrests sent shock waves through the community of relatives. It had been obvious that their persistent demands for an international investigation had been a growing irritant for the government in Kiev, immersed as it is in multiple crises of corruption, growing poverty, ethnic tensions and a deep international skepticism among its potential Western financial backers that it is capable of resolving these challenges.

After the arrests of Kushnaryov and Slobodyanik, reports began surfacing that more arrests and false charges were coming against the relatives of the victims of the May 2 tragedy.

In response, and in consultation with our friends in Odessa, the Odessa Solidarity Campaign first called the Ukrainian Embassy in D.C., asking to speak with Ambassador Valeriy Chaly. There was no response. Next we issued a public statement calling for the immediate release of Alexander Kushnaryov and Anatoly Slobodyanik. Still no response.

Then we raised with our friends the proposal for the International Day of Solidarity with the People of Odessa.

On April 10, several cities held protests along with delivering the letter to President Poroshenko to embassies and consulates. In San Francisco, USA; Budapest, Hungary; Berlin, Germany; and Bern, Switzerland, supporters of Odessa carried signs and banners, chanted slogans and made speeches calling for the release of Kushnaryov and Slobodyanik and an end to the repression against the relatives. In Berlin, the anti-fascist protesters were joined by one of the survivors of the Odessa massacre. 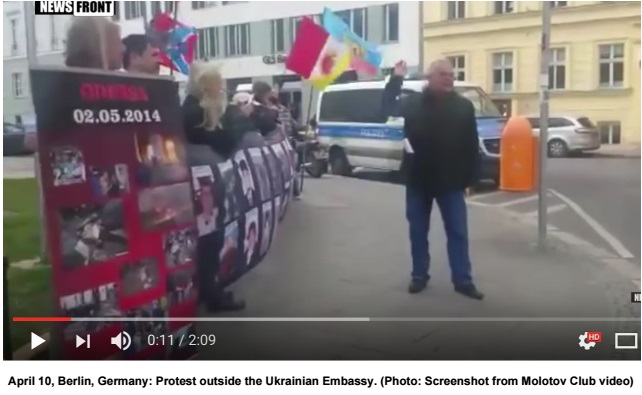 In addition to questions about Odessa, the Tass reporter asked us our position on the April 7 U.S. bombing of the Syrian airbase. We strongly condemned it, and Ray explained that his organization was in touch with several young intelligence officers based in Syria who have said the U.S. version of the use of chemical weapons by the Syrian government was untrue. Too bad there weren’t any U.S. news media present to report that.

What’s the next step? In consultation with our friends in Odessa, and asking advice from the organizations that participated in the April 10 International Day of Solidarity, we’ll evaluate the situation and look for the next opportunity to intervene. Two goals seems obvious: convincing – or forcing – the U.S. and other Western media to report on the repression in Odessa; and building on the multi-country cooperation shown in the April 10 Day of Solidarity to strengthen international support for Odessa.

REPRESSION CONTINUES IN ODESSA – AS DOES THE RESISTANCE

Meanwhile in Odessa, as we all were delivering the letter addressed to President Poroshenko, two people were summoned by the SBU for questioning: Moris Ibrahim, a representative of the Coordinating Council of Left Forces in Odessa, and Nadezhda Melnichenko, an employee of the TIMER online news publication, which has reported on neo-Nazi attacks on relatives of the victims of May 2, 2014. In addition, the homes of two supporters of the relatives of the victims also were searched, allegedly for evidence of separatist activity, a serious matter. No evidence was found; the goal seems to have been intimidation.

And yet, in spite of the atmosphere of repression, thousands of Odessans turned out for the annual commemoration of the liberation of the city on April 10, 1944, from Nazi and Romanian occupation forces. And, as happens each year during the commemoration, thugs from Right Sector and other fascist organizations tried to disrupt the gathering. Last year the police merely separated the neo-Nazis from those participating in the event. This year, interestingly, police arrested 20 fascists. Now we’ll see if they actually are charged with anything. In Odessa, the struggle for Justice continues, as will international support for these courageous modern-day heroes of the Hero City on the Black Sea.

Phil Wilayto is the editor of the Virginia Defender newspaper and coordinator of the Odessa Solidarity Campaign. He can be reached at DefendersFJE@hotmail.com