Remember to Forget the Alamo 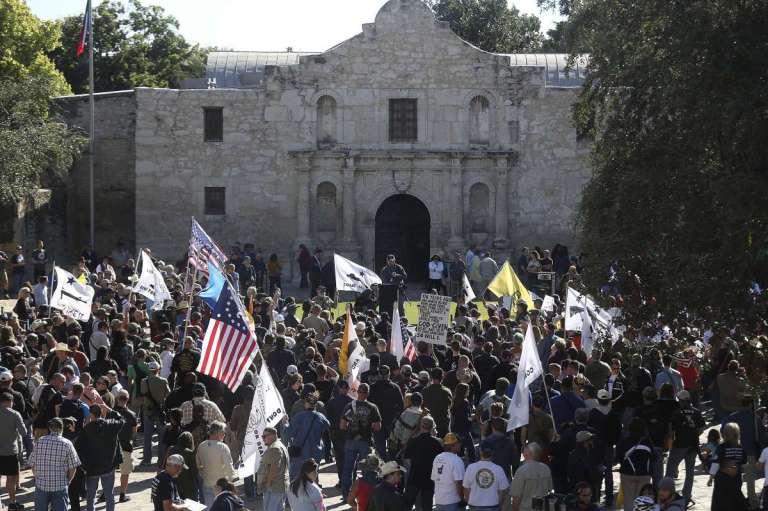 Mexico once had a problem with a local provincial government promoting illegal immigration from the United States into Mexico in order to engage in the illegal slavery of illegally trafficked people. The locality involved was called Texas. For years, Mexico let Texas get away with its lawlessness and immorality, including not paying taxes, and including killing Mexican soldiers. Then it sent an army to lay down the law. Texans warned each other that soldiers were coming “to give liberty to our slaves, and to make slaves of ourselves” (meaning to end the actual enslavement of anyone and to require that people abide by laws and pay taxes).

The Texans illegally recruited soldiers and money from the United States, but were highly disorganized, divided by the fierce racism of the Anglos toward the Latinos among them, and hampered by the predominance of drunks, nuts, and criminals who had fled to Texas from jams they’d gotten into back in the United States. This crowd of buffoons, ready to fight for slavery, profits, political ambition, and the lack of anything else to do, loaded up a little fort in San Antonio called the Alamo with nearly 200 of themselves, bitterly divided even there between two leaders until one of them drank himself into illness.

As a well-trained Mexican army of a couple of thousand steadily approached, the defenders of slavery and white supremacy tried to recruit larger numbers for their side but failed miserably due to lack of support and lack of belief from people who had come to know some of this crowd’s leaders as habitual liars and trouble makers. The slavery-fighters failed to either destroy or abandon the Alamo until it was too late. They became hopelessly trapped. They tried to surrender and be spared, but the proposal was rejected. Some died fighting. Some surrendered and were killed. Some fled, were captured, and were killed. They almost all ended up dead.

This brilliant accomplishment is one of the proudest points in history for many Texans and people around the United States and beyond, mostly because of a bunch of lies invented to embellish the disaster many years later, chief among them the cynical propaganda products of Walt Disney, John Wayne, and Lyndon Johnson. In this mythology, everyone at the Alamo was white and fighting for freedom against evil dark tyranny, and each and every man chose to fight and die in the face of certain defeat. A new book called Forget the Alamo by Bryan Burrough, Chris Tomlinson, and Jason Stanford tells the story.

The Texas Constitution is the only one on earth to guarantee slavery. As Anglos fled the Mexican army, the people they had enslaved fled to the Mexican army and the promise of freedom. This was a real commitment by the Mexican government, but there was nothing saintly about the Mexican army, which slaughtered another 390 Texan soldiers at Goliad just weeks after the massacre at the Alamo. That one of these two atrocities is virtually unknown and the other a highly sacred site and story is mostly an accident of later propaganda.

But even in propaganda immediately following these slaughters, the Alamo seems to have been the more powerful story, though both were used. As in all U.S. war propaganda for centuries, little is more powerful than getting some Americans killed. The story of the Alamo and the cry to remember it quickly sent hundreds of new U.S. recruits, plus weapons and funding, flooding into Texas. The Texans quickly won a big victory and declared themselves an independent nation. Nine years after the Alamo, Texas was a U.S. state.

The following year, the U.S. and Mexico were at war, on the basis of the lies of President Polk, and with U.S. troops hollering “Remember the Alamo!” When the United States, in the course of that war, forced Mexico to give up all of its northern territories, U.S. diplomat Nicholas Trist negotiated most firmly on one point. He wrote to the U.S. Secretary of State: “I assured [the Mexicans] that if it were in their power to offer me the whole territory described in our project, increased ten-fold in value, and, in addition to that, covered a foot thick all over with pure gold, upon the single condition that slavery should be excluded therefrom, I could not entertain the offer for a moment.”

“Remember the Alamo” has been used as a battle cry in the U.S. military for many decades now, was used to justify the horrific war on Vietnam, Laos, and Cambodia, has been a defense of massacres of Mexicans and Latinos by Texas “rangers,” was a focus of Cold War propaganda against the Soviet Union, labor rights, and social welfare, and to this day fuels blind militarism in San Antonio and far beyond.

The authors of Forget the Alamo have done a tremendous job, but I wish they hadn’t followed a quotation of standard Alamo propaganda by writing, “This kind of reactionary stance might have been dismissed as harmless parochialism had it not proven so destructive to the identity of an ethnic group that . . . is poised to become a majority of Texas citizens: Latinos.”

The destructiveness is very real. It’s not just that the Latinos who died at the Alamo alongside the Anglos were erased from the propaganda, leading to the absurd situation in which Latinos demand recognition of past Latinos having been part of that idiotic catastrophe (the self-respect of Hispanic children allegedly dependent on the reading aloud of the names of Tejanos who died on holy ground). It’s also the endless stories the authors found of Latinos in Texas first experiencing bigotry when their school teachers informed their classes that it was their people who had killed Davey Crockett — almost the Texas equivalent of blaming the Jews for killing Jesus Christ. But there would be nothing harmless about war propaganda that failed to fuel bigotry, if such a thing existed.

David Crockett was a famous failed charlatan when he arrived at the Alamo. The fact that he was among those who surrendered and was executed, for decades was held up as evidence of the savagery of the Mexican commander Santa Anna. But Walt Disney decided in the 1950s that Davey Crockett would never have surrendered to Mexicans (or Communists!) which meant that his Christlike status came to depend on the pretense that — unlike Christ — he had gone down fighting.

George W. Bush pushed Alamoloney as heavily as LBJ, and it’s not going away anytime soon. Freedom of Religion in the United States extends de facto to the state religion of war myths. Questioning them is not so much an activity that must align itself with facts, as an act of great offensive rudeness that must apologize for its insensitivity. The use of religious terminology is common in descriptions of the Alamo, and in debates over what to do with the site of it or what to teach children about it. The bizarre beliefs that have been piled on include the belief of British rock musician Phil Collins that he ended a previous life at the Alamo (and that he has photos of the Alamo that capture paranormal glowing orbs). I’d trade the belief that the Pentagon is bravely fending off foreign menaces intent on destroying one’s “freedom” for whatever Phil Collins is thinking any day.