“Know where you stand, and stand there”

The Trident Three were found guilty in Federal Court on charges of “trespassing” on a U.S. nuclear submarine/weapons base last May.

Larry Kerschner, Gilberto Perez and Bernie Meyer, aka: the Trident Three, appeared in United States District Court, Western District of Washington at Tacoma on Wednesday, April 12th. Magistrate Judge David C. Christel presided over the proceedings. A large number of supporters were in the courtroom to witness the trial. 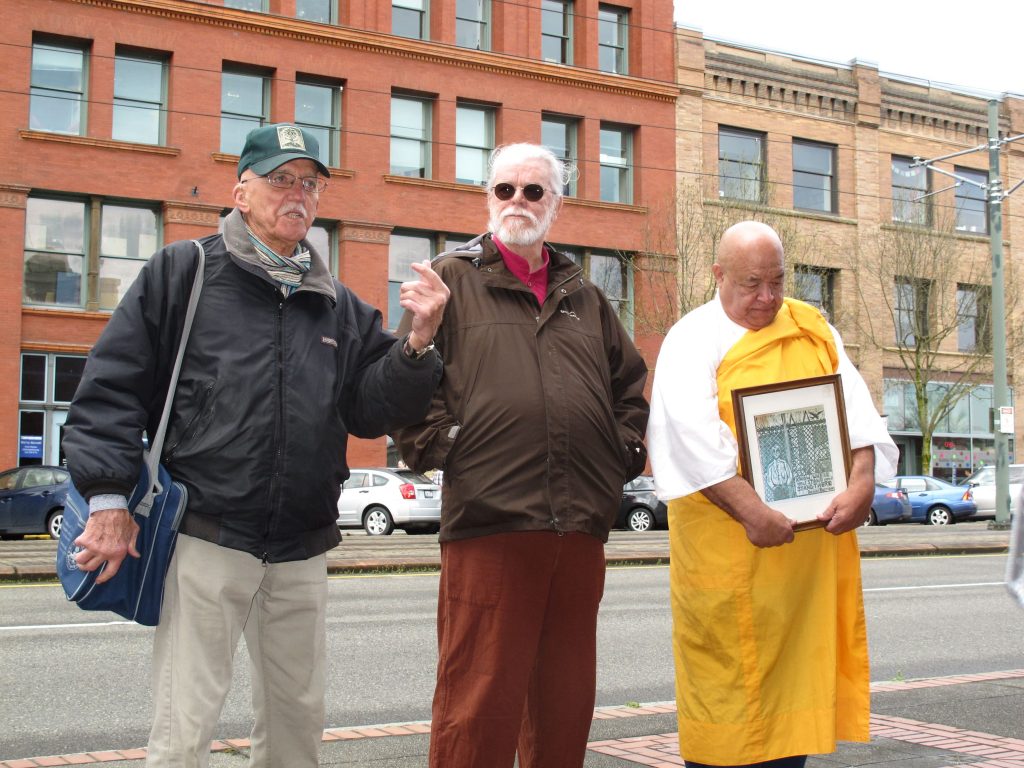 The defendants had their cases consolidated, meaning that their cases could all be tried at the same time. Attorney Blake Kremer, who has supported and represented many nuclear resisters, represented Larry Kerschner, and acted as standby counsel for Meyer and Perez.

All parties had already agreed to and signed the “statement of facts” that defined the events that occurred on May 7, 2016 when, during a vigil held by Ground Zero Center for Nonviolent Action, the three demonstrators engaged in a peaceful protest, entering the main highway and briefly blocking traffic on the federal side of the Main gate at Naval Base Kitsap-Bangor in Silverdale, Washington. The three demonstrators carried an illustration of Fr. Daniel Berrigan, revered anti-war and anti-nuclear weapons priest, with a statement by Fr. Berrigan: “Know where you stand and stand there.” They also carried a colorful banner with symbols linking nuclear weapons and climate change.

The nonviolent direct action was held in honor of Mother’s Day, which, in the United States was first suggested in 1872 by Julia Ward Howe as a day dedicated to peace. Howe saw the effects on both sides of the Civil War and realized destruction from warfare goes beyond the killing of soldiers in battle.

The three resisters were arrested by base security, booked, and released. They received citations pursuant to Title 18 USC Section 1382 for trespass on a military installation.

The court, as it has done in every case involving nuclear resisters at the Bangor base, granted the government’s motion in limine, which disallowed presenting any defense involving the necessity defense, international law regarding the use of nuclear weapons, and the policies of the U.S. government regarding the use of nuclear weapons. At Blake Kremer’s request, however, the court agreed to give some leeway in the defendants’ testimony. 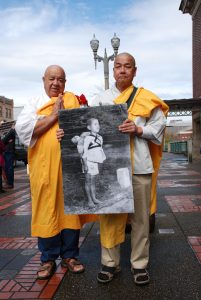 Kremer noted to the court that the defendants have lived lives of service to humanity, and that they are united in the belief that nuclear weapons are illegal and immoral.

On the stand, Gilberto Perez spoke of how he prayed as he and the other defendants crossed the blue line onto the Bangor base. During their action he carried a framed etching of Fr. Daniel Berrigan with one of Berrigan’s famous quotes, “Know where you stand, and stand there.” When asked by Kremer what he would do for the cause of Peace, he replied that, “I would be willing to give my life; to spend the rest of my life in jail.” Perez noted that is willing to sacrifice himself to get across the message that we can use diplomacy with Russia, North Korea and China and prevent nuclear war.

Larry Kerschner said that people do not consider the implications of the use of nuclear weapons and their effects. “We tried to wake people up to what Trident can do – the indiscriminate killing of mass numbers of people.”

On the stand, Bernie Meyer said that, “the experts are warning us… we have to give up business as usual,” and that there must be “trust” among world leaders in order to solve the existential problems we face, particularly nuclear weapons and climate change. He also quoted former Secretary of Defense William Perry who recently said that it is up to the people to speak out and demand action on nuclear weapons.

In part of Blake Kremer’s closing statement he said, “These defendants have knowledge that some courts and legal scholars believe they have a right and even an obligation to bring their message of peace and nonviolence to the base commander and the government, and that the importance of this message makes it necessary and legally justifiable for them to stand on base while attempting to deliver this message.” Sadly, the court made it impossible for the defendants to use any defenses that have been recognized in other courts! Click here to read Kremer’s full closing statement. 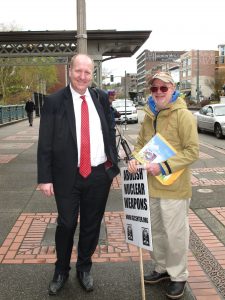 In a final irony, Judge Christal also noted, in accordance with the government’s request, that the 100 hours of community service must be completed in organizations “unrelated to the prevention of nuclear proliferation.” The judge did, however, note before handing down his decision that the defendants are “highly principled people with deeply held values…”

As much as the defendants attempted to bring light to the real crime – the continuing threat of use of Trident against other nations – justice was not served in the courtroom on this day. Instead, the National Security State protected its narrow interests rather than upholding the Constitution of the United States along with the rights of all humanity to live free of the threat of nuclear annihilation.

The Trident submarine base at Bangor employs the largest concentration of deployed nuclear weapons in the U.S. and is the home port for 8 of the Navy’s 14 Trident nuclear powered submarines. More than 1,300 nuclear warheads are deployed on Trident D-5 missiles on SSBN submarines based at Bangor or stored at Strategic Weapons Facility Pacific (SWFPAC) at the Bangor submarine base.

One Trident SSBN submarine at Bangor is estimated to carry about 108 nuclear warheads. The W76 and W88 warheads at Bangor are equal respectively to 100 kilotons and 455 kilotons of TNT in destructive force. One submarine deployed at Bangor is equal to more than 1,400 Hiroshima sized nuclear bombs.

The nuclear warheads at SWFPAC and on submarines based at Bangor have the combined explosive power equivalent to more than 14,000 Hiroshima bombs.

A March 2017 report from the Bulletin of the Atomic Scientists shows that the U.S. has been upgrading the W76 warhead, and has developed a “super-fuze” that makes the refurbished warhead three times as lethal as before. This huge increase in kill capability makes it appear as if the United States is preparing for a decapitating nuclear attack.

Before the trial, supporters vigiled in front of the Tacoma Union Station Courthouse carrying signs that read, “Abolish Nuclear Weapons”, and and handed out leaflets about the trial. 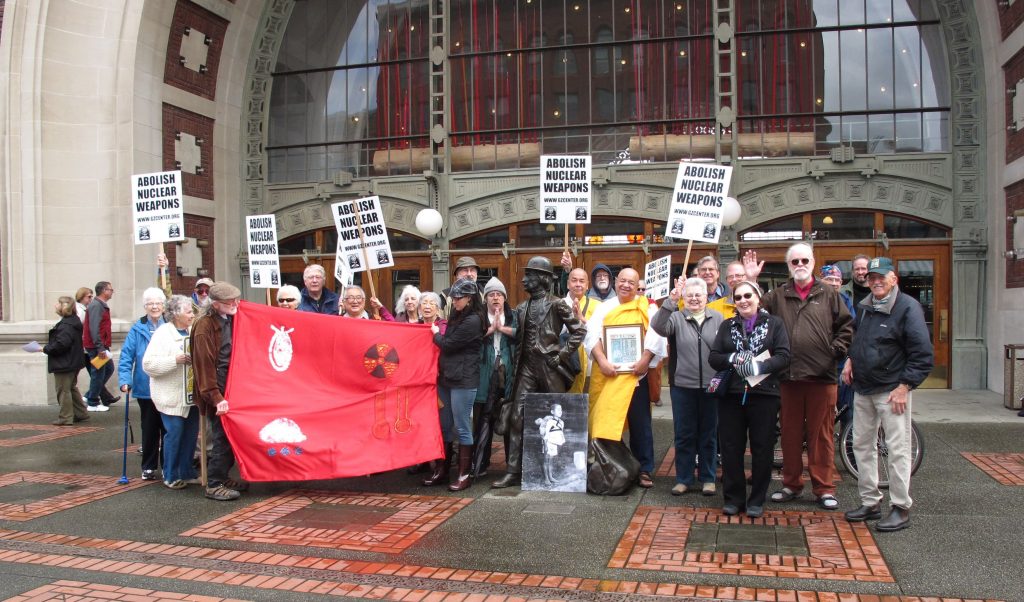 In statements (prior to their trial) of the reasons for their collective action against nuclear weapons the Trident Three said the following:

Bernie Meyer: “We are at a juncture, a juncture that we created, that is of our own doing. We created nuclear weapons, nuclear power, a whole system of radiation dispersal. We created a way of life that spews carbon dioxide, methane, and more chemicals into the atmosphere which circulates into the oceans and onto the continents and heats them up beyond our accustomed tolerance. What do we do? What will you do?”

Gilberto Perez: “A moral consciousness is needed in realizing love and compassion for all. The revolution of the heart melts away the walls of hate, and war. We must love each other, or nuclear annihilation is inevitable. We are not alone.”

Larry Kerschner: “Twenty miles west of Seattle is the largest concentration of deployed nuclear weapons in the U.S. It is clear that the actual use of nuclear weapons would grossly violate the international laws of humanitarian armed conflict under any conceivable circumstances. How can the US threaten the use of nuclear weapons without violating international law? The Nuremberg Principles absolutely proscribe crimes against peace, crimes against humanity, and war crimes. How can the US Government lawfully establish a threat to commit such heinous offenses?”

May we all “know where we stand, and stand there.” 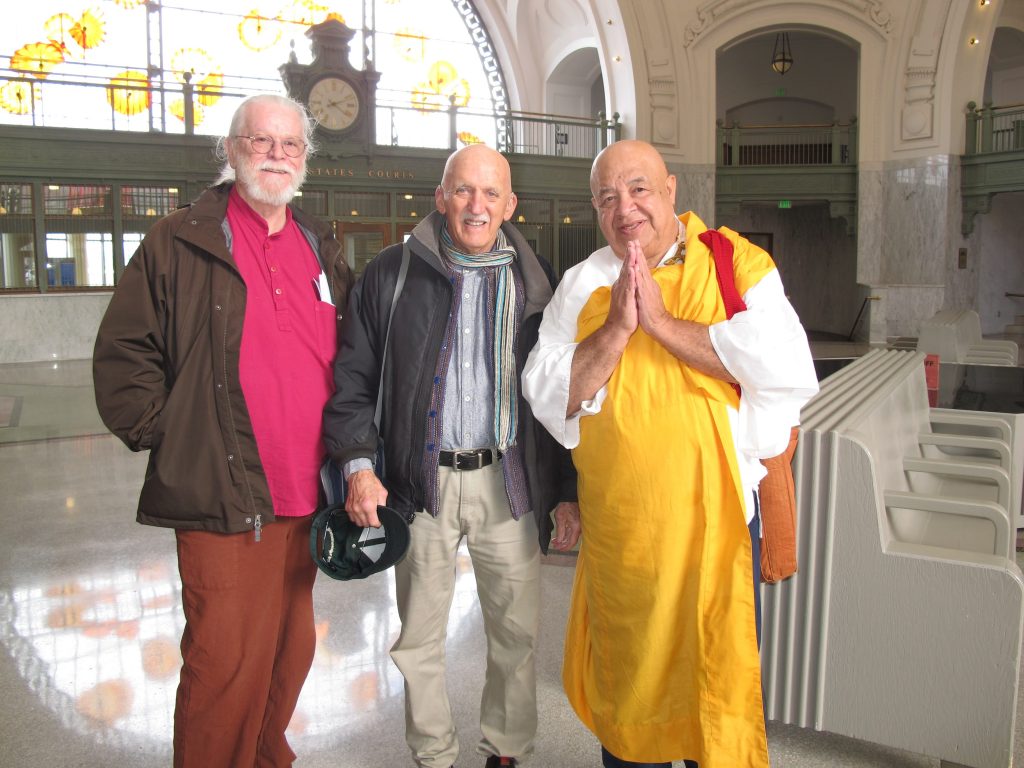 The Trident Three after their trial

The Ground Zero Center for Nonviolent Action was founded in 1977. The center is on 3.8 acres adjoining the Trident submarine base at Bangor, Washington. The Ground Zero Center for Nonviolent Action offers the opportunity to explore the roots of violence and injustice in our world and to experience the transforming power of love through nonviolent direct action. We resist all nuclear weapons, especially the Trident ballistic missile system.