Have You Declared Peace?

Have you declared peace?
February 15, 2003, saw the biggest public demonstrations against war (or for anything else) in history. The U.S.-led illegal and immoral war on Iraq went from bad to worse for 8 years.
In recent months, the United States has started it back up; last week NATO “leaders” made plans; and this week President Obama will announce a new war on Iraq.

With 145 airstrikes in the past month and over 1,100 U.S. troops on the ground already, President Obama plans to tell us that just three more years of escalation will make right what 24 years of wars and bombings and sanctions have left in ruins. Three years of bombing will, he says, destroy what has been created by and continues to be empowered by the bombing.

Add to this portrait of insanity, the ongoing war in Afghanistan, the U.S. missile strikes in Somalia, Pakistan, and Yemen, the expansion throughout Africa and Asia, and the continued aggressiveness toward Russia as NATO seeks to expand still further eastward and two nations struggling under the weight of nuclear stockpiles are put into conflict.

Observers have called this the most dangerous moment since World War II.
We call this a moment to oppose, not only each of the numerous wars and rumors of wars, but to reject the idea that conflicts must be handled by either bombing people or doing nothing.

Now is a great time to sign the Declaration of Peace at https://legacy.worldbeyondwar.org/individual
Please share this email with everyone you can, and encourage them to sign as well.
Please keep sending suggestions for our new Peace Holidays Calendar.
Please donate now more than ever. We cannot continue without your support.

NEWS:
Read What To Do About ISIS. (And watch video of Russell Brand reading and recommending this article.)
Laugh away the mentality of war-as-only-option along with Monty Python.
Read Is There Still Hope for Peace in Ukraine?
Read The Pentagon: The Climate Elephant
Imagine A Future That Values Everyone.
Video: Why End War in Two Minutes.
Video: No to NATO, No to New Wars.
Video: How Protect and Serve Became Search and Destroy.

EVENTS:
Let us know about any event you’re planning. We’re listing them all on the right-hand side of WorldBeyondWar.org.
Resources with which to create an event.
Calendar of important peace holidays. 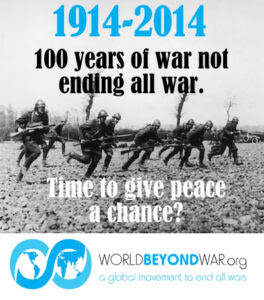 September 21, International Day of Peace Let us know about any event. Here’s a list of events in the U.S. arranged on a map by Campaign Nonviolence. Work with Campaign Nonviolence and Global Movement for the Culture of Peace and Peace One Day and A Year Without War.
Participate in People’s Climate March in New York City, September 20-21. (See the Peace Appeal, and the Global Climate Convergence.)
Let people know how war destroys the climate. (Flyer: PDF.)
A Powerpoint on Uniting Peace and Climate (PPT).
Begin marking 100 years since the Christmas Truce.
Find great information on World War I at 100 on NoGlory.org
Joyeux Noel: a film about the 1914 Christmas truce.
Script for reenactment of Christmas Truce: PDF.
Christmas Truce information and videos.
If you’re in the Northeast U.S. or the U.K. you might be able to attend or even set up a production of The Great War Theatre Project: Messengers of a Bitter Truth: Info in PDF.
Also, schools can join a video streaming project between schools in different countries. This project was started by the International Association of Peace Messenger Cities: http://iapmc.org .

This September 26 is the first UN International Day for the Total Elimination of Nuclear Weapons.
UNFOLD ZERO has established a platform for promoting actions and events to commemorate the day. In addition to the UN resolution establishing the day, it has been supported by resolution of the member parliaments of the Inter Parliamentary Union (164 parliaments including most of those of the nuclear-armed States and their allies) and by resolution adopted by the US Conference of Mayors.
Sep 26 is very close to the International Day of Peace on Sep 21. Thus, we encourage campaigners to consider linking the two and organising events in the week of Sep 21-26 that commemorate both.

November 6, International Day for Preventing the Exploitation of the Environment in War and Armed Conflict
info.

December 25, 100 Years Since the Christmas Truce

Let us know about any event you’re planning.

If you’d like to help plan events, email events@worldbeyondwar.org