The World Is My Country: Important New Film about Garry Davis’s Fight for Global Citizenship 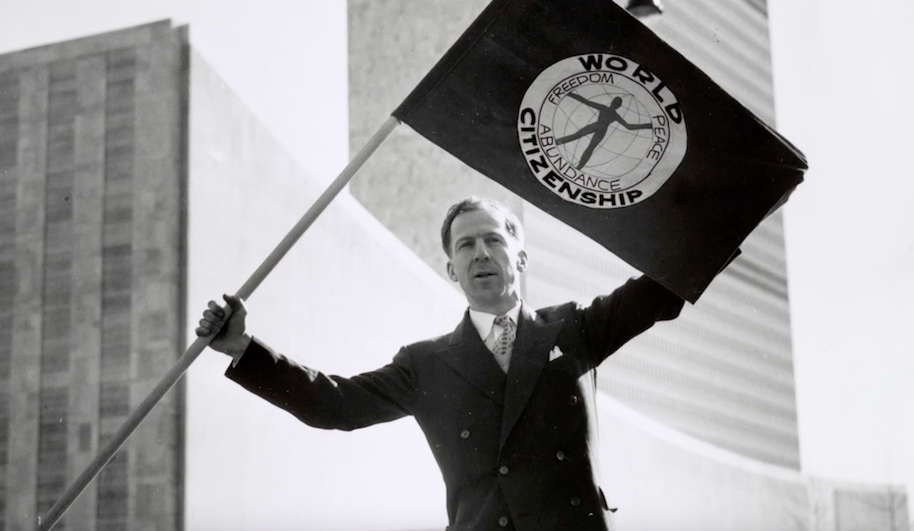 Garry Davis was a young Broadway actor in 1941, an eager understudy for Danny Kaye in a Cole Porter musical called “Let’s Face It” about US Army inductees, when America entered World War Two and he found himself heading for Europe in an actual soldier’s uniform. This war would change his life. Davis’s older brother, also now fighting in Europe, was killed in a naval attack. Garry Davis was flying bombing missions over Brandenberg, Germany, but he could not bear the realization that he was helping to kill other people just as his beloved brother had just been killed. “I felt humiliated that I was part of it,” he later said.

There was something different about this soulful young man, whose life story is told in a riveting, deeply inspiring new film called “The World Is My Country”, directed by Arthur Kanegis and currently making the rounds of the film festival circuits in hope of a wider release. The flashbacks that open the film show the transition that now overtook Garry Davis’s life, as he continues to appear in cheerful Broadway shows with performers like Ray Bolger and Jack Haley (Davis physically resembled both, and might have pursued a career similar to theirs) but yearns to answer to a greater call. Suddenly, as if on an impulse, he decides in 1948 to declare himself a citizen of the world, and to refuse to conform to the idea that he or any other person must maintain national citizenship at a time in a world when nationhood is inextricably linked to violence, suspicion, hatred and war.

Without much forethought or preparation, this young man actually gives up his US citizenship and turns in his passport in Paris, which means that he is no longer legally welcome in France nor anywhere else on planet Earth. He then sets up a personal living space in a tiny spot of land by the river Seine where the United Nations is meeting, and which France has temporarily declared open to the world. Davis calls the United Nations’s bluff, and declares that as a citizen of the world this spot of land must be his home. This creates an international incident and suddenly the young man is catapulted to an odd sort of world fame. Living on the street or in makeshift tents, first at the United Nations conference in Paris and then by a river separating France from Germany, he succeeds in calling attention to his cause and gathering support from great public figures like Jean-Paul Sartre, Simone de Beauvoir, Albert Camus, Andre Breton and Andre Gide. At the height of this dizzying period of his life, he is cheered by a crowd of 20,000 young protestors and cited for his work by Albert Einstein and Eleanor Roosevelt.

“The World Is My Country” narrates the life journey of Garry Davis, who died in 2013 at the age of 91. Not surprisingly, it was a rough journey. At his greatest moments of public acclaim, this modest self-trained philosopher often felt deeply critical of himself, and describes the despondency that overwhelmed him at the very moments when his “followers” (he never intended to have any, and did not consider himself a leader) expected him to know what to do next. “I began to lose myself,” he says in a very touching onstage narration decades later, which provides much of the story’s structure as this unusual movie proceeds. He ended up working in a New Jersey factory for a short period, then attempting (without much success) to return to the Broadway stage, and ultimately founding an organization devoted to world citizenship, the World Government of World Citizens, which continues to issue passports and advocate for peace around the world today. 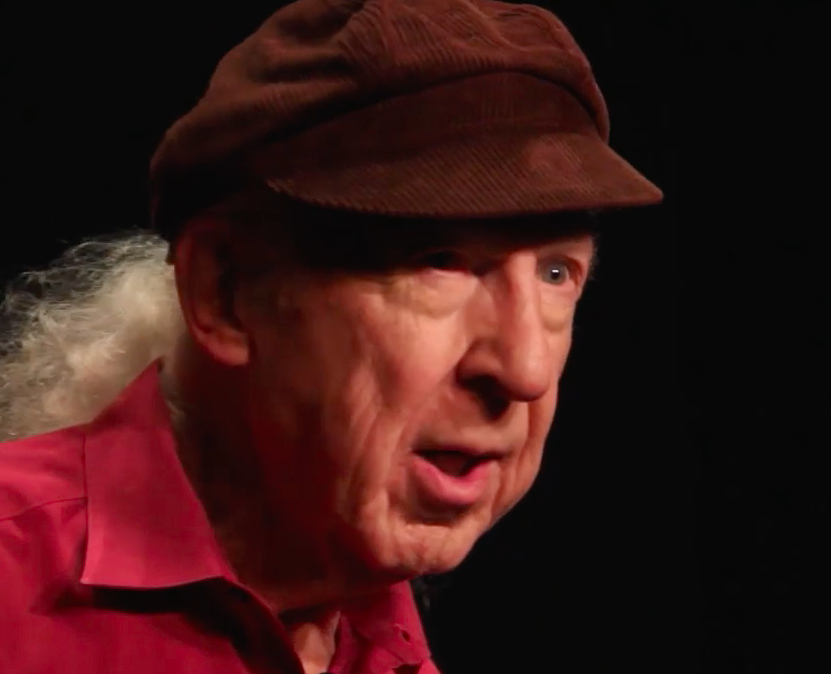 “The World Is My Country” is an important movie today. It reminds us of the vital, hopeful ideals that gripped the world for a few years after the disaster of World War Two ended in 1945 and before the disaster of the Korean War began in 1950. The United Nations was once founded upon these ideals. Garry Davis seized this moment, prodding and provoking the UN by insisting that it live up to the power of its lofty words about global peacemaking, and ultimately using its Universal Declaration of Human Rights as the foundation for his enduring organization.

Watching this emotionally powerful film today, in a world still festering with injustice, needless poverty and vicious war, I found myself pondering whether or not there is any power at all left in the Universal Declaration of Human Rights, which once meant so much to Garry Davis and his many activist partners. The notion of global citizenship is obviously potent, but remains both controversial and largely unknown. Several notable public figures and celebrities appear in support of the legacy of Garry Davis and the notion of global citizenship in “The World Is My Country”, including Martin Sheen and the rapper Yasiin Bey (aka Mos Def). The movie shows how easily people begin to understand the notion of global citizenship once it is explained to them – and yet the notion remains sadly alien to our everyday lives, and is thought of rarely if at all.

One thought occurred to me that isn’t even mentioned in this film, though the film does raise the question of what a global society would use for monetary currency. Today, economists and others are grappling with the emergence of blockchain currencies like Bitcoin and Ethereum, which use the power of Internet technology to provide the secure underpinnings of a working currency that is not backed by any nation or government. Blockchain currencies have financial experts around the world perplexed, and many of us are both excited by and concerned about the possibilities of an economic system that does not rely on national identity. Will this be used for good and evil? The potential is there for both … and the fact that blockchain currencies suddenly now exist as an extranational economic system points to one of many ways “The World is My Country” carries a message that feels relevant in 2018.

The message is this: we are citizens of the world, whether we recognize it or not, and it is up to us to help our muddled and paranoid societies choose a future of community and prosperity over a future of hatred and violence. Here is where we feel the import of the existential courage that moved a young man named Garry Davis to take an incredible personal risk by giving up his own national citizenship in Paris in 1948, without even a clear idea of what he would do next. In Davis’s wonderful onstage appearances later in his life, when he speaks of the 34 prisons he has survived and celebrates the family he raised with the woman he met on the borderline between Germany and France, along with all the great activities he engaged in since then, we see how this courage turned an aimless song-and-dance man and ex-GI into a hero and an example for others.

But other scenes that also end this powerful movie, showing refugees around the world who yearn for anything like the relief and the justice that global citizenship could bring, show us how real the struggle remains. Like Garry Davis in 1948, and even far worse, these human beings have no country in the truest and most tragic sense. These are human beings for whom a notion of global citizenship might represent the difference between life and death. It is for them that Garry Davis lived his exemplary life, and it is for them that we must continue to take his ideas seriously and carry on his fight. 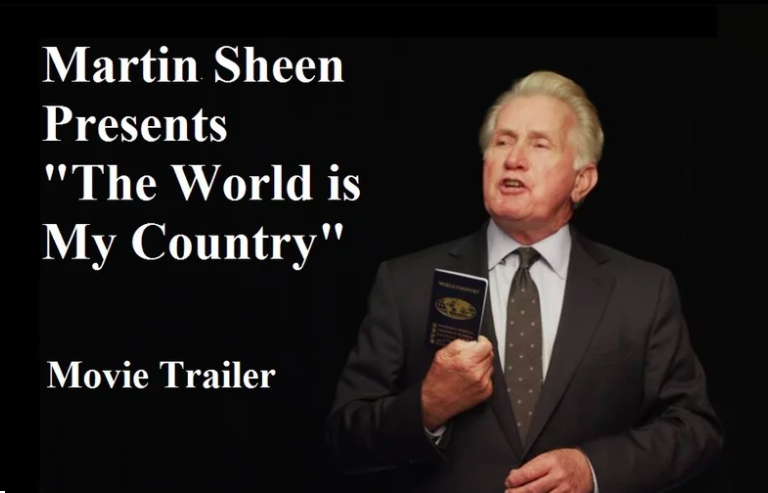 For more about this film, or to see the trailer, visit TheWorldIsMyCountry.com. The film is currently only being shown in film festivals, but you can see a film festival screener of the entire movie online for free for one week between February 14 and February 21: visit www.TheWorldIsMyCountry.com/wbw and enter the password “wbw2018”. This screener will also provide information about how to show this film in a festival in your area.