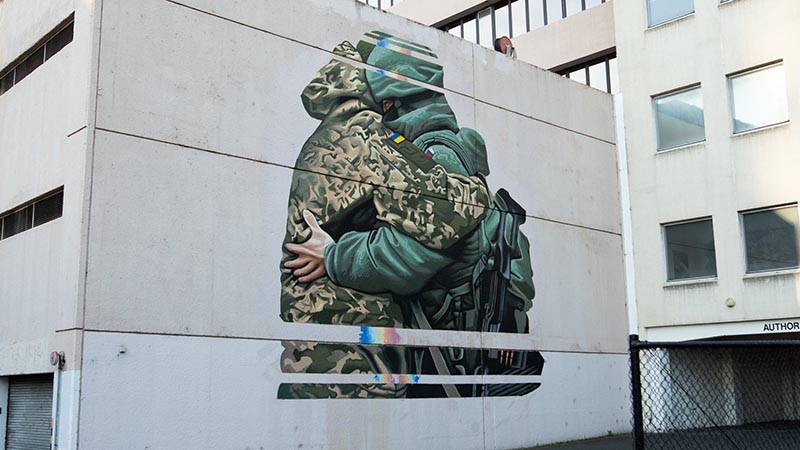 A talented artist in Melbourne, Australia, has been in the news for painting a mural of Ukrainian and Russian soldiers hugging — and then for taking it down because people were offended. The artist, Peter ‘CTO’ Seaton, has been quoted as saying he was raising funds for our organization, World BEYOND War. We want to not only thank him for that but offer to put the mural up elsewhere.

Here is a small sampling of the reporting on this story:

World BEYOND War has funds donated to us specifically for putting up billboards. We would like to offer, should Seaton find it acceptable and helpful, to put this image up on billboards in Brussels, Moscow, and Washington. We would like to help with reaching out to muralists to put it up elsewhere. And we would like to put it on yard signs that individuals can display around the world. 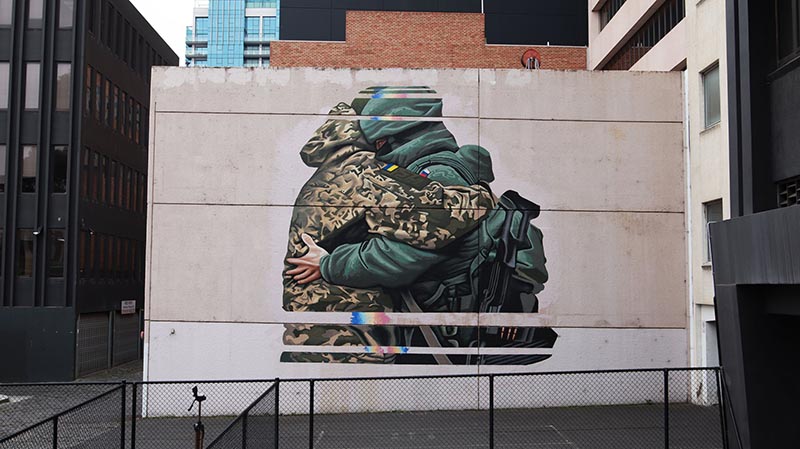 World BEYOND War is a global nonviolent movement to end war and establish a just and sustainable peace. World BEYOND War was founded on January 1st, 2014, when co-founders David Hartsough and David Swanson set out to create a global movement to abolish the institution of war itself, not just the “war of the day.” If war is ever to be abolished, then it must be taken off the table as a viable option. Just as there is no such thing as “good” or necessary slavery, there is no such thing as a “good” or necessary war. Both institutions are abhorrent and never acceptable, no matter the circumstances. So, if we can’t use war to resolve international conflicts, what can we do? Finding a way to transition to a global security system that is supported by international law, diplomacy, collaboration, and human rights, and defending those things with nonviolent action rather than the threat of violence, is the heart of WBW. Our work includes education that dispels myths, like “War is natural” or “We have always had war,” and shows people not only that war should be abolished, but also that it actually can be. Our work includes all variety of nonviolent activism that moves the world in the direction of ending all war.