Why Meng Wanzhou Should Be Released Now! 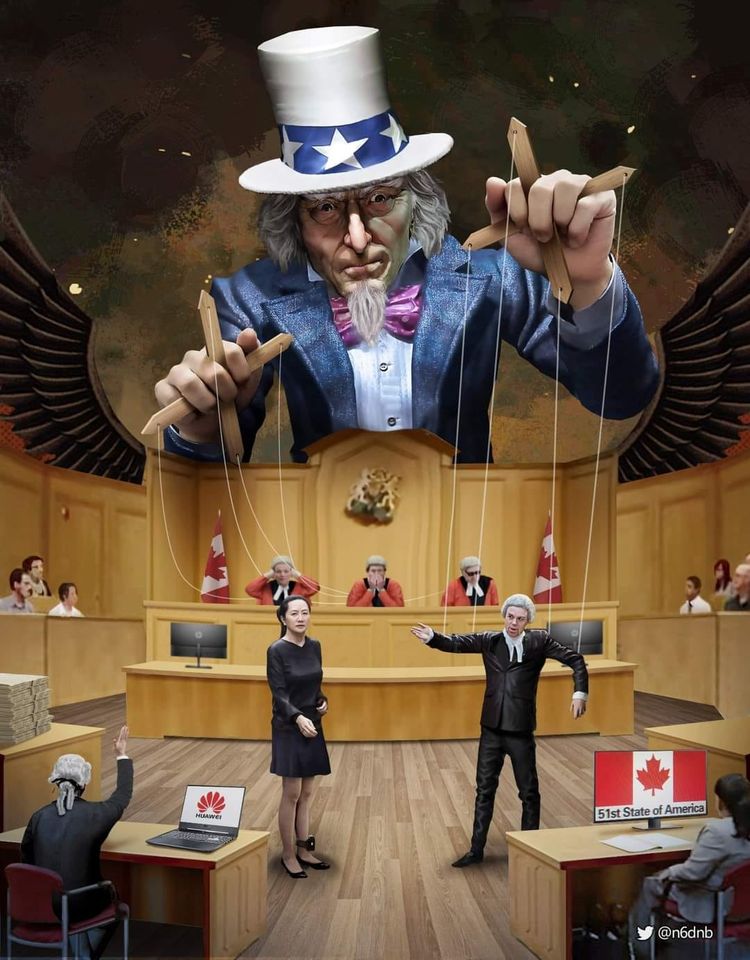 Thursday, August 26, 2021, marked the 1000th day of unjust incarceration by the Trudeau government of Meng Wanzhou. That’s 1000 days during which Mme. Meng has been denied her freedom, has not been able to be with members of her family, has not been able to carry on the duties of her very responsible position as Chief Financial Officer of Huawei Technologies, one of the world’s leading tech companies, with 1300 employees in Canada.

Meng’s ordeal began on December 1, 2018, the date on which Prime Minister Justin Trudeau kowtowed to the request of former USA President Donald Trump’s to extradite Meng. This was a colossal blunder on Trudeau part’s because it torpedoed fifty years of good relations between Canada and China, resulted in China curtailing major economic purchases in Canada (to the detriment of 1000’s of Canadian producers), and, because the Trudeau government dithered on the question of Huawei’s participation in the deployment of Canada’s 5G network, may have threatened the entire future existence of Huawei in Canada. Furthermore, Trudeau’s obsequiousness towards Trump embarrassingly called into question the very sovereignty of the Canadian state in front of the entire world, that it would sacrifice its own national interest in the service of its imperial neighbour.

Just six days after Meng’s arrest, Trump made it clear that her arrest was a political kidnapping and that she had become a bargaining chip. Indicating he would intervene in U.S. efforts to extradite Meng Wanzhou if it helped him win a trade deal with China, he said, “If I think it’s good for what will be certainly the largest trade deal ever made, which is a very important thing — what’s good for national security — I would certainly intervene, if I thought it was necessary.” That statement, in itself, should have prompted Justice Minister Lametti to to reject the US extradition request because Section 46 (1c) of the Extradition Act clearly states, “The Minister shall refuse to make a surrender order if the Minister is satisfied that… the conduct in respect of which extradition is sought is a political offence or an offence of a political character.” Instead, Lametti approved Trump’s request.

There is no end in sight of Ms. Meng captivity because no matter how Justice Holmes rules on the US request for her extradition, there are likely to be appeals which may stretch on for years. The irony is that Justice Holmes is fully aware of the lack of legal substance in the US extradition request which was revealed in the trove of HSBC bank documents which the judge ruled to exclude during the final round of extradition hearings, which ended a few days ago. These documents prove Mme. Meng gave HSBC complete disclosure of transactions related to Iran and no fraud was committed.

We note that Justice Holmes remarked during the Crown’s final arguments earlier this month, “Isn’t it unusual that one would see a fraud case with no actual harm many years later and one in which the alleged victim, a large institution, appears to have numerous people within the institution who had all the facts that are now said to have been misrepresented?”

In other words, it’s clear to Justice Holmes as well as Justin Trudeau, his entire cabinet, and indeed the whole world, that Meng Wanzhou has committed no crime, whether in Hong Kong, the USA, or Canada. Moreover, her company, Huawei Canada, has proved to be a good corporate citizen.

Our Cross-Canada Campaign to FREE MENG WANZHOU takes the position that Minister of Justice Lametti ought to use his discretionary power, as provided by s. 23 of the Extradition Act, to end this miscarriage of justice by terminating the extradition and pointless house arrest of Ms. Meng. We note that the 19 dignitaries who penned the Open Letter to Justin Trudeau in June 2020, calling on him to release Meng Wanzhou, also commissioned a prominent Canadian lawyer, Brian Greenspan, to write a legal opinion, which found that it was entirely within the rule of Canadian law for the Justice Minister to terminate the extradition of Meng.

For the record, we note that the US request to extradite Meng was based on the false premise of US extraterritoriality, that is to say, attempting to exert non-existent US jurisdiction over dealings between Huawei, a Chinese high-tech company; HSBC, a British bank; and Iran, a sovereign state, none of whose dealings (in this matter) took place in the USA, except the unilateral and totally unnecessary transfer of US dollars (unknown to Ms. Meng) by HSBC from its London, UK, office to its subsidiary in New York. By requesting Meng’s extradition from Canada to the USA, Trump was also sending a signal to global political and business leaders that the US would continue to enforce its unilateral and illegal economic sanctions on Iran which were supposed to have been lifted under UN Security Council Resolution 2231 when the JCPOA (Iran Nuclear Deal) came into effect on January 16, 2016. (The US withdrew from the JCPOA in 2018 before the arrest of Meng.) Finally, Trudeau shouldn’t have collaborated with Trump because of Trump’s malicious intent to cripple Huawei and crush China’s high tech industry.

By releasing Meng today, Canada could show a measure of independence of foreign policy and begin to restore friendly political and economic relations with the People’s Republic of China, our second-largest trading partner, for the mutual benefit of the Canadian and Chinese peoples.

Our Campaign has been participating in the current federal election by challenging candidates on their stands about the immediate and unconditional release of Meng because whomever forms the new Government of Canada will inherit Trudeau’s colossal blunder of arresting Meng.

Following the election, then, on Wednesday, Sept. 22, at 7 pm EDT, we will hold a Zoom panel discussion entitled, “Why Meng Wanzhou should be released NOW!” Panelists, so far, include John Philpot, international criminal lawyer, Montreal; and Stephen Gowans, Ottawa-based author, political commentator, and blogger at “What’s Left.” We invite peace activists from around the world to register for this Zoom event.

Ken Stone is the treasurer of the Hamilton Coalition To Stop The War and a longtime anti-war, anti-racist, labour, and environmental activist.