World BEYOND War is supporting our Canada Organizer, Rachel Small, in spending the first half of November at Gidimt’en camp at the invitation of Wet’suwet’en leaders who are defending their territory while confronting militarized colonial violence.

This week, I’ll be traveling out to Wet’suwet’en Territory in response to the urgent call-out for solidarity and boots on the ground from Hereditary Chiefs of the Cas Yikh Gidimt’en Clan of the Wet’suwet’en Nation. In an effort to mobilize support from across our city, I’ll be joined by five fellow Toronto organizers traveling the 4500km across so-called Canada. Before leaving, I wanted to take the time to share some of the context for what’s going on there right now, and to explain why I will be going, in the hopes that it will spark further solidarity with the Wet’suwet’en people at this crucial moment.

The third wave of blockades against the Coastal Gaslink Pipeline

One month ago, on September 25th 2021, Wet’suwet’en members of Cas Yikh and their supporters at Gidimt’en Checkpoint shut down Coastal GasLink’s drill site on their own Wet’suwet’en territory on the banks of the sacred Wedzin Kwa River. They’ve set up a camp which has completely halted any work on the pipeline. Over the last week the Likhts’amisyu Clan of the Wet’suwet’en Nation has also used heavy equipment to control access to a man camp at a different spot on Wet’suwet’en territory. All Hereditary Chiefs of the five clans of the Wet’suwet’en have unanimously opposed all pipeline proposals and have made it very clear that they have not provided the free, prior, and informed consent that is required for Coastal Gaslink to drill on Wet’suwet’en lands.

Leadership at Gidimt’en Checkpoint has put out several direct appeals for supporters to come to camp. I, like many others, am responding to that call.

An appeal from Sleydo’, Gidimt’en Checkpoint Spokesperson, to come to camp and explaining just what’s at stake. If you watch only one video make it this one. ​​

The invasion of Wet’suwet’en land, an ongoing genocidal project

Right now we’re more than a month into the third wave of blockades on Wet’suwet’en territory against the Coastal Gaslink pipeline. Earlier waves of resistance over the past several years have been met by appalling state violence. This violence has been primarily carried out by militarized units of the RCMP (Canada’s national police force, also historically the paramilitary force first used to colonize western Canada), alongside a new Community-Industry Response Group (C-IRG), essentially a resource extraction protection unit, and supported by ongoing military surveillance.

The RCMP presence on Wet’suwet’en territory between January 2019 and March 2020 – which included two militarized raids against land defenders – cost more than $13 million. Leaked notes from an RCMP strategy session before one of these militarized raids show that commanders of Canada’s national police force called for the deployment of officers prepared to use lethal force. The RCMP commanders also instructed officers, who were dressed in military-green fatigues and armed with assault rifles, to “use as much violence toward the gate as you want.” 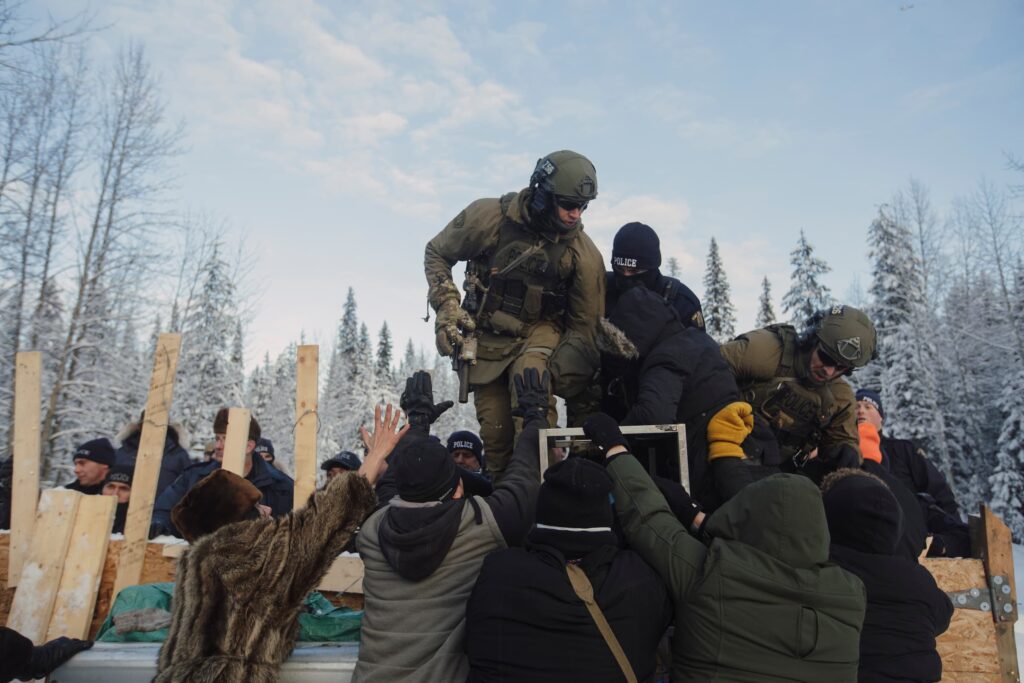 RCMP officers descended on the checkpoint in a militarized raid on Wet’suwet’en territory. Photo by Amber Bracken.

Wet’suwet’en leaders understand this state violence as part of an ongoing colonial war and genocidal project that Canada has perpetrated for over 150 years. Canada is a country whose foundations and present are built on colonial war that has always served primarily one purpose–to remove Indigenous people from their land for resource extraction. This legacy is playing out right now on Wet’suwet’en territory.

We all need to be watching + responding to the violence the Canadian state is perpetrating on #Wetsuweten territory right now. All to shove through a pipeline that is genocidal to the Wet’suwet’en and will make the planet literally unliveable for everyone. #wetsuwetenstrong https://t.co/S21Xq9hyQr

For myself, both as a staff organizer at World BEYOND War and a settler on stolen Indigenous land, it’s clear that if I’m serious about war abolition and about stopping state violence and militarism that means intervening directly in the militarized invasion being enacted right now on Wet’suwet’en land.

It is hypocritical to wear orange shirts and commemorate lives lost at “residential schools” on the days designated by the colonial government if we then turn away and refuse to witness the same colonial violence happening right now. It is well documented that residential schools were a tool whose primary goal was to remove Indigenous people from their lands. This same pattern is continuing right in front of us in myriad ways. We must refuse to turn away.

They are digging up our bones and trying to replace them with pipelines. I've been out here at the Gidimt'en Yinta...

Coastal Gaslink is preparing to drill under the Wedzin Kwa river to construct their 670km fracked gas pipeline. The $6.2 billion pipeline is part of the largest fracking project in Canada’s history. And Coastal Gaslink is just one of many proposed pipelines attempting to cut across the Wet’suwet’en traditional territories. If built, it would expedite the construction of additional bitumen and fracked gas pipelines, as part of a larger industry vision to create an “energy corridor” through some of the only pristine areas left in the entire region and irreversibly transform Wet’suwet’en and surrounding territories.

The resistance camp that was set up at the end of September on CGL’s drilling pad has completely stopped the pipeline in its tracks at precisely the point where it was about to drill under Wedzin Kwa, the river that is the heart of Wet’suwet’en territory. As Sleydo’, Spokesperson for Gidimt’en Checkpoint explains “our way of life is at risk. Wedzin Kwa [is the] river that feeds all of Wet’suwet’en territory and gives life to our nation.” The river is a spawning ground for salmon and a critical source of pristine drinking water on the territory. Drilling a pipeline under it would be disastrous, not only for Wet’suwet’en people and the forest ecosystems that rely on it, but also for the communities living downstream.

This struggle is about defending this sacred river on Wet’suwet’en land. But for me, and many others, this is also about a much broader stand. If we are committed to the ongoing existence of any rivers on this planet that are pristine, that we can continue to drink directly from, then we need to be serious about defending them.

The struggle for a liveable future on this planet

As the parent to a four-year old, I think several times a day about what this planet will look and feel like in 20, 40, 60 years. Standing alongside the Wet’suwet’en people to stop CGL’s pipeline is the best way I know to assure a liveable planet for my kid and for future generations. I’m not being hyperbolic – in August a new climate report demonstrated that Indigenous resistance has stopped or delayed greenhouse gas pollution equivalent to at least one-quarter of annual U.S. and Canadian emissions. Let that number sink in for a second. At least 25% of annual emissions in Canada and US have been prevented by Indigenous people resisting pipelines and other fossil fuel projects on Wet’suwet’en territory and across Turtle Island. This fits into a broader global picture – despite the fact that Indigenous people make up just 5% of the world’s population, they protect 80% of the earth’s biodiversity.

A commitment to a liveable future on our planet, to climate justice, and to decolonization, absolutely means non-Indigenous people joining in solidarity. While my work is focused on Canadian militarism, World BEYOND War is deeply committed to engaging in solidarity work with Indigenous struggles against militarism and ongoing colonization globally – from supporting Tambrauw Indigenous activists in West Papua blocking a proposed military base on their territory, to Indigenous Okinawans in Japan protecting their land and water from the US Military, to land defense by We’tsuwet’en peoples.

And what’s happening on Wet’suwet’en territory is not a rare instance of overlap between the disasters in progress of militarism and climate crisis – this confluence is the norm. The climate crisis is in large part caused by and being used as an excuse for increasing warmaking and militarism. Not only is foreign military intervention in a civil war over 100 times more likely where there is oil or gas, but war and war preparations are leading consumers of oil and gas (the U.S. military alone is the #1 institutional consumer of oil on the planet). Not only is militarized violence needed to steal the fossil fuels from Indigenous lands, but that fuel is in turn highly likely to be put to use in the commission of wider violence, while simultaneously helping to render the earth’s climate unfit for human life.

In Canada the outrageous carbon emissions of Canada’s military (by far the largest source of government emissions) are exempted from all federal GHG reduction targets, while the Canadian mining industry is the global leader in the devastating extraction of materials for war machines (from uranium to metals to rare earth elements).

A new report released this week demonstrated that Canada spends 15 times more on the militarization of its borders than on the climate financing intended to help mitigate climate change and the forced displacement of people. In other words, Canada, one of the countries most responsible for the climate crisis, spends vastly more on arming its borders to keep migrants out than on tackling the crisis that is forcing people to flee from their homes in the first place. All this while weapons exports cross borders effortlessly and secretly, and the Canadian state justifies its current plans to buy 88 new bomber jets and its first unmanned armed drones because of the threats that the climate emergency and climate refugees will cause.

The Wet’suwet’en are winning

Despite the colonial violence and capitalist power pitted against them at every turn, Wet’suwet’en resistance over the last decade has already contributed to the cancellation of five pipelines.

“Many pipeline companies have sought to drill under these waters, and have used many colonial tactics of intimidation and violence against Wet’suwet’en people and supporters to wear us down. Yet the river still runs clean, and Wet’suwet’en still remain strong. This fight is far from over.”
– Statement published by Gidimt’en Checkpoint on yintahaccess.com

In the months before the pandemic, in response to the Wet’suwet’en call for solidarity, the #ShutDownCanada movement rose up and, by blockading railroad, highways, and critical infrastructure across the country, threw the Canadian state into a panic. The past year has been marked by an upswell in support for #LandBack and a growing recognition of Canada’s colonial history and present, and the need to support Indigenous sovereignty and jurisdiction over their territories.

Now, a month after their blockade on CGL’s drilling pad was first set up, the camp stands strong. Wet’suwet’en people and their allies are preparing for the coming winter. It’s time to join them.