US military use of airport “disaster waiting to happen”, says Limerick activist 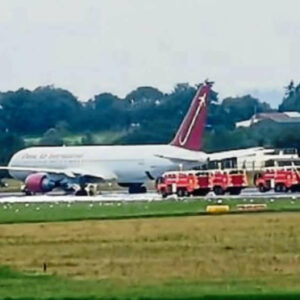 FOLLOWING last week’s fire on a plane carrying US troops at Shannon peace activists have confirmed that there will be a major anti-war conference in Limerick and Shannon in October.

International speakers have been lined up for the rally at the South Court Hotel, Raheen on Saturday October 5, which will be followed by a peace camp in Shannon that night and a rally on the Sunday.

The title of the conference is #NoWar2019 with the goal of putting an end to the airport’s use by US military.

According to Edward Horgan, international secretary of the Peace and Neutrality Alliance, “continued US usage of Shannon is a disaster waiting to happen”.

Mr Horgan’s comments come in the wake of the five-hour closure last Thursday of Shannon Airport following a fire on the plane carrying troops.

Shannon Airport has been used as a stopover for American personnel, with the issue coming to a head in the early 2000’s amidst the invasions of Afghanistan and Iraq.

Figures from 2009 show that American troops passing through the airport generated €30 million in revenue for the Shannon Airport Authority between 2005 and 2008.However 2009 was the height of the American involvement in the Middle East, and has declined substantially since then.

Critics argue that the American usage of Shannon Airport is a violation of Irish neutrality, and Mr Horgan, who is a vocal member of Shannonwatch, has lamented the US’ dealings at the airport.

“We fully support the restoration of Shannon as a genuine civilian airport and are convinced that the reputation and future of the airport has, and is being seriously damaged by US Military and CIA misuse of the airport” claims Mr Horgan.

“The emergency at Shannon last week involving a fire on an OMNI Air plane carrying armed US troops is an indication of a possible worsened disaster waiting to happen.”