Ukraine and the Myth of War 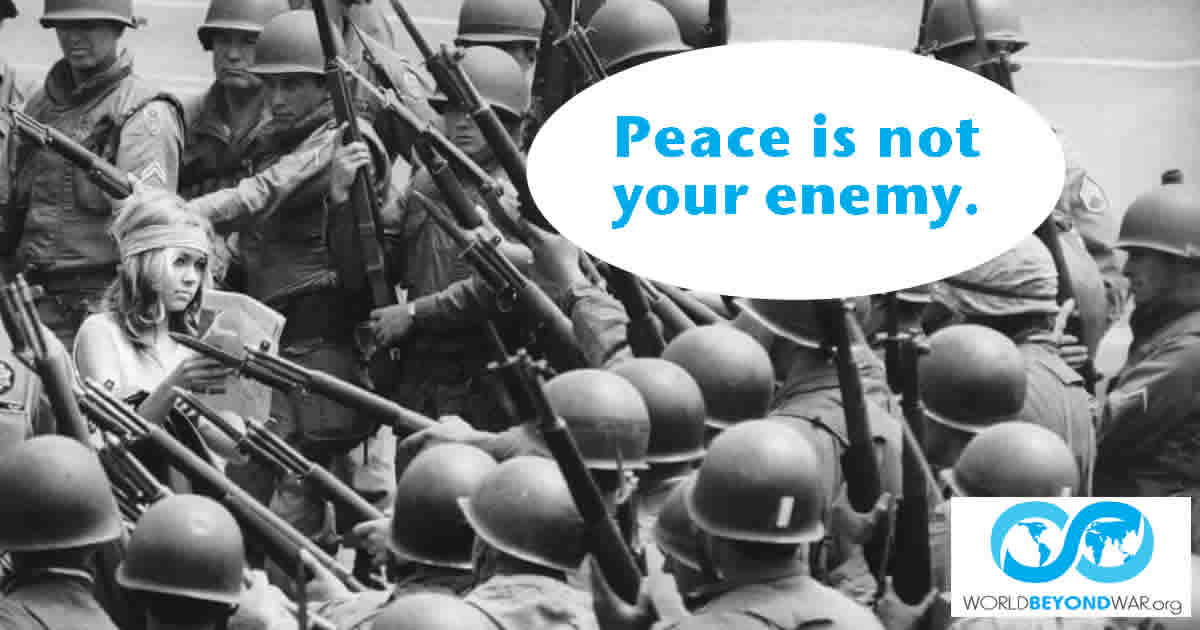 Last September 21st, in commemoration of the 40th anniversary of the International Day of Peace, as U.S. forces withdrew from Afghanistan, our local peace organization emphasized that we would be relentless in saying no to the calls for war, that those calls for war would come again, and soon.

It did not take long.

The American military establishment and our domestic war culture must always have a villain, a cause, a war. Great sums of money must be spent, weapons quickly deployed, people killed, cities razed.

Now, Ukraine is the pawn.

Some shrug and say war is in our bones. While aggression may be part of our DNA, the systematic killing of organized warfare is not. That is learned behavior. Governments created it, perfected it to advance their empires, and could not perpetuate it without the support of its citizenry.

And so, we the citizens must be duped, fed a story, a myth of rogues and righteous causes. A myth of warfare. We are the “good guys,” we do no wrong, killing is noble, evil must be stopped. The story is always the same. It is only the battlefield and the “evil ones” who change. Sometimes, as with the case of Russia, the “evil ones” are simply recycled and used again. America has bombed a sovereign country every day for the last twenty years, in Iraq, Afghanistan, Somalia, and Yemen. Yet that is never part of the story we tell ourselves.

Since the fall of the Soviet Union, we have used NATO to surround Russia. Our military and that of our NATO Allies— tanks and nuclear missiles and fighter jets— have moved up against the Russian border in a provocative and destabilizing way. Despite assurances NATO would not expand to include former Soviet bloc countries, we have done just that. We weaponized the Ukraine, minimized diplomatic solutions such as the Minsk Protocol, played a role in the 2014 coup that ousted the government there and installed a pro-Western one.

How would we respond if the Russians were garrisoned in massive numbers along the Canadian border? If the Chinese conducted live-fire war drills off the coast of California? In 1962 when the Soviets installed missiles in Cuba, our outrage was so severe we took the world to the brink of nuclear war.

Our long history of assimilating other lands into our own, of meddling in foreign elections, of overthrowing governments, invading other countries, of torture, leaves us with little room to speak when others breach international law. But it does not seem to prevent our government, our news media, our own selves from repeating the war myth of Americans as the good guys and everyone else as evil. It has become our bedtime story, one that seeds a nightmare.

We have arrived at this point of peril in Eastern Europe because we have lost the ability to see the world through the eyes of another. We see with the eyes of a soldier, an American soldier, not a citizen. We have allowed military behavior to define our human behavior, and so our outlook becomes hostile, our thinking belligerent, our worldview filled with enemies. But in a democracy, it is the citizens who are to rule, not the soldiers.

And yet a relentless stream of propaganda, a perverse telling of our history, and the glorification of war, create a militaristic mentality in far too many of us. It thus becomes impossible to comprehend the behavior of other nations, to understand their fears, their concerns. We know only our own created story, our own myth, we care only for our own concerns, and so are forever at war. We become provocateurs rather than peacemakers.

Military aggression should be stopped, international lawlessness condemned, territorial boundaries respected, human rights violations prosecuted. To do that we must model the behavior we claim to esteem, do it in a way that it becomes learned in each one of us and in the rest of the world. Only then will transgressors be few and truly isolated, unable to function in the international arena, thereby prevented from fulfilling their unlawful aims.

The Ukraine should not have to suffer invasion by Russia. And Russia should not have had its safety and security threatened by NATO expansion and weaponry. Are we truly incapable of resolving these concerns without slaughtering each other? Is our intellect that limited, our patience that short, our humanity so curdled that we must repeatedly reach for the sword? War is not genetically set in our bones, and these problems are not divinely created. We made them, and the myths surrounding them, and so we can unmake them. We must believe this if we are to survive.

Brad Wolf is a former lawyer, professor, and Community College Dean. He is co-founder of Peace Action of Lancaster, an affiliate of Peace Action.org.