A few days after an over-hyped white supremacist rally in Washington, D.C., was massively outnumbered by people opposed to racism, and one day after 187 organizations (more than that now) publicly committed to turning out people to counter Donald Trump’s planned weapons parade with a parade for peace in celebration of the 100th anniversary of Armistice Day, and less than a day after the U.S. military said the weapons parade would now cost $92 million (which in fairness is a legitimate rounding up from the earlier estimate of $12 million according to the rules of Pentagon math), the parade of death and war profiteering that was threatened for November 10th in Washington, D.C., has been canceled, or (as these things are always announced) “postponed.”

Far from assuming no danger of the Trumparade actually being resurrected, organizers of the peace parade are planning to move forward as planned with a celebration of both Armistice Day and the prevention of the disastrous scheme to roll a giant middle finger to the world down Pennsylvania Avenue in the form of the weapons of mass destruction built by some of the top “contributors” to U.S. election campaigns, dealers of instruments of death to dictatorships around the world, and prospective members of the nascent Space Force.

Events are being planned for the weekend of Armistice Day in Washington, D.C., and around the world. The plan is to . . . 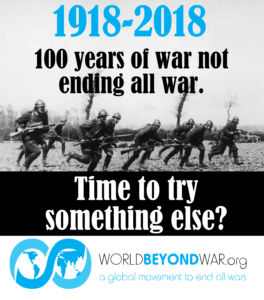 Celebrate No Trump Military Parade in Washington on November 10!

If you can be in Washington, D.C., to celebrate preventing the Trump military parade, also sign up here.

Also, join in the Women’s March on the Pentagon on October 21-22.

We’ll also be part of Catharsis on the Mall, November 10-12, in Washington, D.C.

Note also that the Kennedy Center in DC is opening a show about the WWI Christmas Truces on the evening of November 10.

Veterans For Peace is planning a silent march to all the monuments in Washington, D.C., on November 11.

November 11, 2018, is Armistice Day 100, a century since World War I was ended at a scheduled moment (11 o’clock on the 11th day of the 11th month in 1918). For decades in the United States, as elsewhere, Armistice Day was a holiday of peace, of sad remembrance and joyful ending of war, of a commitment to preventing war in the future. The holiday’s name was changed in the United States during the U.S. war in Korea to “Veterans Day,” a largely pro-war holiday on which some U.S. cities forbid Veterans For Peace groups from marching in their parades. Trump had planned for this year a super-pro-war weapons parade — a Trumparade — for Washington D.C. on Saturday November 10th, the day before Armistice Day.

Our goal (now partially met) was to get the weapons parade (until recently planned for November 10th) canceled but to carry through with our own peaceful Armistice Day celebration in Washington, D.C., and everywhere else on earth. If the Trumparade had not been canceled, our goal was to be bigger and make a more impressive showing for peace and friendship than the weapons parade made for war and hatred and profiteering greed.

We need your help planning Armistice Day / Remembrance Day events everywhere on earth, and adding our presence to those already scheduled. If you can start an event or a contingent to participate in a larger event, we can help you. The first step is: please enter it into our system so that it shows up on our map for people to find.

A graphic you can use. 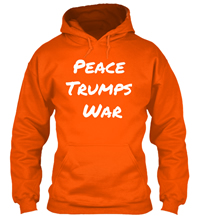 About the Trump Weapons Parade: