Trudeau Should Not Be Buying Costly New Carbon-Intensive Warplanes 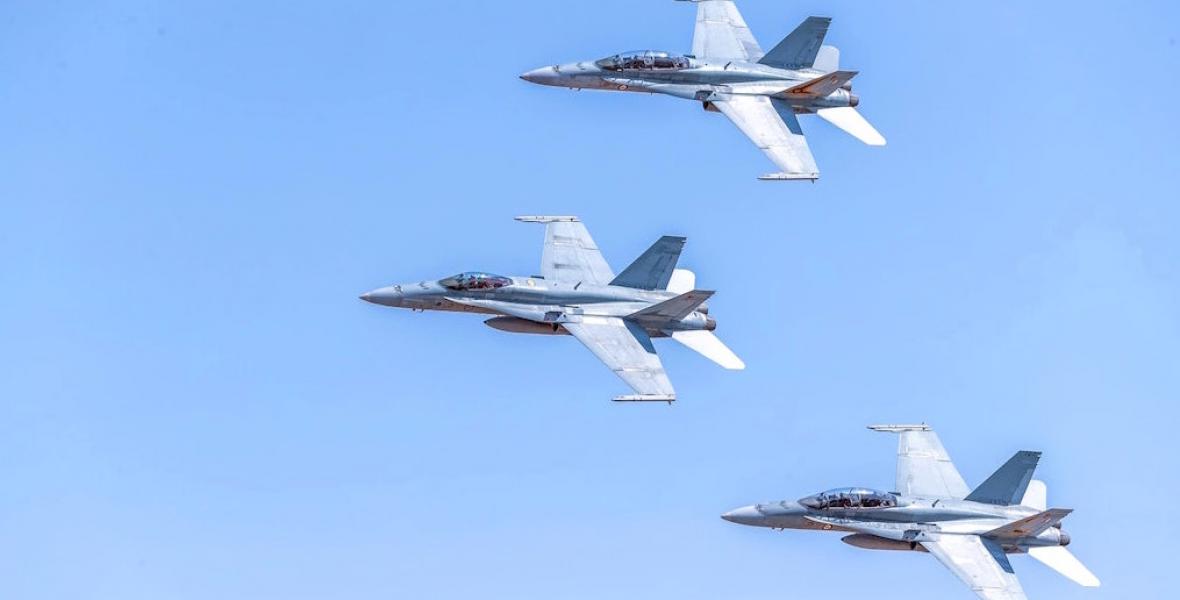 This weekend 100 people across the country will be participating in the No Fighter Jet Coalition‘s fast and vigils to oppose Canada’s planned purchase of 88 new fighter jets. The Fast to Stop the Jets will also honour those who have been killed by Canadian fighter jets.

In the coming months, the federal government is expected to release an initial evaluation of the proposals for new fighter jets. The competitors are Saab’s Gripen, Boeing’s Super Hornet and Lockheed Martin’s F-35.

The fighter jet question has consumed a great deal of energy in the federal government. In testimony to the House of Commons Standing Committee on Defence on Tuesday, former clerk of the Privy Council Michael Wernick suggested the purchase of new fighter jets was among the issues that “caused us to lose focus” on the allegations of sexual misconduct by former chief of defence staff general Jonathan Vance.

The federal government says it plans to spend about $19 billion on new jets. But that’s just the sticker price. Depending on the plane selected, the true cost could be four times that amount. According to a recent report released by the No Fighter Jets Coalition, the lifecycle cost — from acquisition to upkeep to disposal of the planes — is estimated at $77 billion.

Those resources would be better invested in a just recovery and Green New Deal jobs. The funds devoted to warplanes could also fix the First Nations water crisis and guarantee healthy drinking water on every reserve. And it is enough money to build tens of thousands of units of social housing or multiple light rail lines in different cities.

But it’s not simply a matter of financial waste. Canada is on pace to emit significantly more greenhouse gases (GHGs) than it agreed to in the 2015 Paris agreement. Yet we know fighter jets use incredible amounts of fuel. After the six-month-long bombing of Libya in 2011, the Royal Canadian Air Force revealed that its half-dozen jets consumed 8.5 million litres of fuel. What’s more, carbon emissions at higher altitudes have a greater warming effect, with other flying “outputs” including nitrous oxide, water vapour and soot, which produce additional climate impacts.

With the concentration of carbon dioxide in the atmosphere passing 420 parts per million for the first time last weekend, it is an absurd time to be purchasing carbon-intensive warplanes.

The Department of National Defence is by far the largest emitter of GHGs in the federal government. Incredibly, however, the armed forces’ emissions are exempt from national reduction targets.

In addition to ensuring we cannot achieve our climate targets, fighter jets are not required to protect Canadians. They are largely useless in dealing with a global pandemic or a 9/11-style attack, responding to natural disasters, providing international humanitarian relief or in peacekeeping operations. These are offensive weapons designed to enhance the air force’s ability to join operations with the U.S. and NATO.

Campaigns of death and destruction

The 78-day bombing of the former Yugoslavia violated international law as neither the United Nations Security Council nor Serbian government approved it. The same can be said for the more recent bombing in Syria. In 2011, the Security Council approved a no-fly zone to protect Libyan civilians, but the NATO bombing went far beyond UN authorization.

A similar dynamic was at play with Iraq in the early ’90s. During that war, Canadian fighter jets engaged in the so-called “Bubiyan Turkey Shoot” that destroyed Iraq’s hundred-plus naval vessels, and coalition bombing destroyed much of Iraq’s civilian infrastructure. The country’s electricity production was largely demolished as were major dams, sewage treatment plants, telecommunications equipment, port facilities and oil refineries. Twenty thousand Iraqi troops and thousands of civilians were killed.

In Libya, NATO fighter jets severely damaged the Great Manmade River aquifer system. Attacking the source of 70 per cent of the population’s water was likely a war crime. Since the 2011 war, millions of Libyans have faced a chronic water crisis. During six months of war, the alliance dropped 20,000 bombs on nearly 6,000 targets, including more than 400 government buildings or command centres. Dozens, probably hundreds, of civilians were killed in the strikes.

An October Nanos poll revealed that bombing campaigns are an unpopular use of the military. When respondents were asked “how supportive, if at all, are you of the following types of Canadian forces international missions,” airstrikes were the least popular of eight options provided.

Seventy-seven per cent backed “participating in natural disaster relief abroad” and 74 per cent supported “United Nations peacekeeping missions,” while only 28 per cent of those polled supported “having the Canadian Air Force involved in airstrikes.” Additionally, using the military to support NATO and ally-led missions was a low priority for those polled.

In response to the  question, “In your opinion, what’s the most appropriate role for the Canadian Armed Forces?” 6.9 per cent of those polled said, “support NATO missions/allies” while 39.8 per cent chose “peacekeeping” and 34.5 per cent selected “defend Canada.” Yet, spending $77 billion on cutting-edge fighter jets only makes sense in the context of plans to fight in future U.S. and NATO wars.

If the Canadian government is truly serious about protecting life on Earth, it should not be buying 88 unnecessary, climate-destroying, dangerous new fighter jets.

Bianca Mugyenyi is the director of the Canadian Foreign Policy Institute.