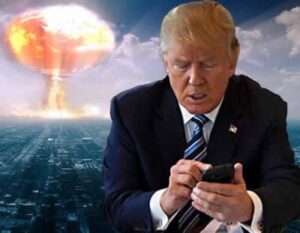 On Tuesday the Senate Foreign Relations Committee held a hearing on whether Trump can just up and nuke people or not. The hand-picked witnesses, all former military, all said there was some chance that if Trump ordered a nuking, somebody might refuse to carry out the order. On what grounds? No witness or Senator ever mentioned the illegality of war under the UN Charter or the Kellogg-Briand Pact. But one witness brought up “necessity” and “proportionality” as grounds for deeming a particular apocalypse-creating act illegal and another legal. But these “just war” concepts are not empirical. There’s no standard for determining whether an action is “necessary” or “proportional.” It comes down to the mood the commander of Strategic Command is in that day, or the partisan identity of some official, or the courage and integrity of rank-and-filers ordered to begin the earth’s destruction. If, like me, you’re not convinced that’s good enough, here are some other possible approaches:

1) Pass a new law for North Korea and one for each other country on earth pointing out that a stronger law already exists called the U.S. Constitution which forbids presidents from launching wars that have not been declared by Congress, and include a ban on using any funds to violate the law.

2) As long as we’re passing laws to acknowledge the existence of laws, pass one to point out the absolute ban on war in the Kellogg-Briand Pact, as well as the near-ban on war in the UN Charter whose loopholes could certainly not be met by a presidential nuking. The two loopholes are (I.) authorization by the UN, and (II.) actual defense (where defense means something distinct from offense). Being a crime, war is not something Congress can make legal any more than a president can. An extra law pointing out that the UN Charter also bans threatening war, and that Trump has been threatening war, couldn’t hurt.

3) As long as we’re reading the Constitution and admitting that the president cannot be trusted to comply with laws, given the numerous laws he’s already violating, get moving immediately to impeach, convict, remove from office, arrest, indict, and prosecute Trump. Even Tuesday’s witnesses mentioned tangentially the “civilization threatening outcomes” we’re facing here. Perhaps a bit of urgency is appropriate?

4) Pressure Congress to step in and pursue diplomacy with North Korea and end the practices most threatening to North Korea. Congress has the complete ability to withdraw U.S. troops from South Korea, to withdraw U.S. weapons from South Korea, to withdraw U.S. ships from the Pacific, to ban U.S. bombing practice flights over Korea, to shut down new U.S. nuclear weapons programs, to stop U.S. missile tests, to forbid any first strikes, to take nukes off high alert, to dismantle U.S. nukes a few at a time while asking the world to follow suit, and to ask former president Jimmy Carter to visit North Korea on a mission of friendship.

6) Sign the People’s Peace Treaty with North Korea, and join in efforts to make peace ourselves.

8) Find Joe McCarthy’s grave in Appleton, Wisconsin. Dig a large hole next to it. Toss in Russiagate and bury it there once and for all. In its place, take up the advice of Mikhail Gorbachev, and build friendship and cooperation with Russia.