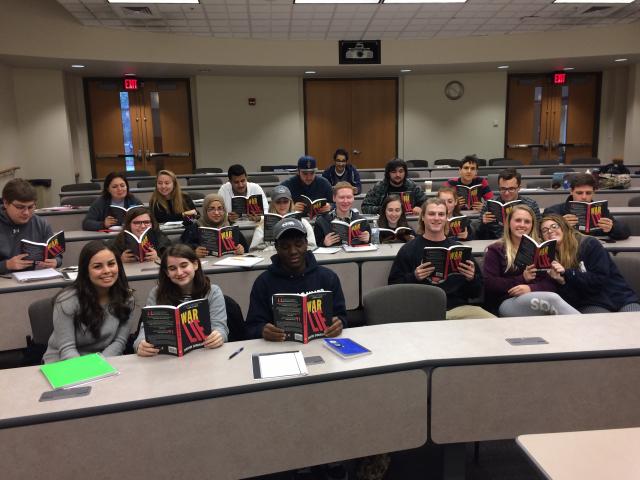 Have yall learned absolutely nothing?

The U.S. government’s internal memos right now, if we see them years from now, will be found to have said that expanding NATO and putting troops and weapons into Eastern Europe including Ukraine has provoked Russia to put troops near its border with Ukraine — a giant success for weapons dealers, NATO’s continued existence, and militarist politicians. They’ll say that sending even more weapons and troops is likely to generate even more weapons sales, subservience to U.S. interests, and isolation of Russia as an eternal enemy — albeit with other designated enemies such as China and Iran aligning with Russia, and albeit with a risk of war in Ukraine and of nuclear war that would end life on the planet — a risk deemed sufficiently low because of the unlikelihood that Russia will invade Ukraine.

The U.S. government’s public statements right now claim that Russia has invaded Ukraine before (fudging over the complications of the U.S.-backed coup, the pre-existing Russian base in Crimea, the overwhelming vote of the people of Crimea which not a single weapons-funded pundit has ever proposed be redone, and any understanding of the history of Ukraine or of the Nazi forces in the new government) and will do so again out of pure irrational evil, or alternatively will stage a coup in Ukraine (hurrying past any idea that this might be a projection of U.S. thinking). The way to prevent the looming Russian invasion, they tell us, is to send yet more troops and weapons to the border of Russia.

The U.S. has zero Russian weapons on its borders. A single one would provoke at the very least: U.S. troops near that border and the demand that all troops and weapons and military alliances be removed the hell out of the neighborhood and hemisphere. But that’s the U.S. which deserves such security due to its being a democracy.

A democracy, as we all know, is a place where you put in power a guy who wants to risk nuclear war with Russia because the other guy proposed nuking North Korea. This is called freedom of choice, and it’s a simply wonderful thing to have, especially when you may all be ABOUT TO FUCKING DIE ALONG WITH EVERY OTHER LIVING THING ON EARTH. Nuclear apocalypse is faster than climate apocalypse or imaginary meteors, but nobody survives it. Everything ends. The scientists last week said the Doomsday Clock is staying one tick away from midnight because the risk has never been higher.

Is there something wrong with you people? Are you unaware that every single war is based on lies? ( https://warisalie.org ) Are you unaware that nuclear winter is not a seasonal fashion trend? Do you really think that the nuclear option is a Senate voting procedure? Have you gone back and convinced yourself that Gadaffi was planning mass rapes, Hussein was taking babies out of incubators, Assad has been spraying chemical weapons left and right, the Vietnamese staged an attack in the Gulf of Tonkin, South Korea was an innocent democracy, nobody provoked Japan, the Lusitania had no weapons or troops, the Spanish blew up the Maine, the boys in the Alamo died playing a shuffleboard benefit for their freed former slaves, Patrick Henry really wrote that speech 30 years after he died, Molly Pitcher existed, Paul Revere (and Lee Harvey Oswald) rode alone, and George Washington never told a lie?

Are you out of your everloving minds?

You’d have to be a stupid son of a Biden.