Time to Negotiate for Peace in Space 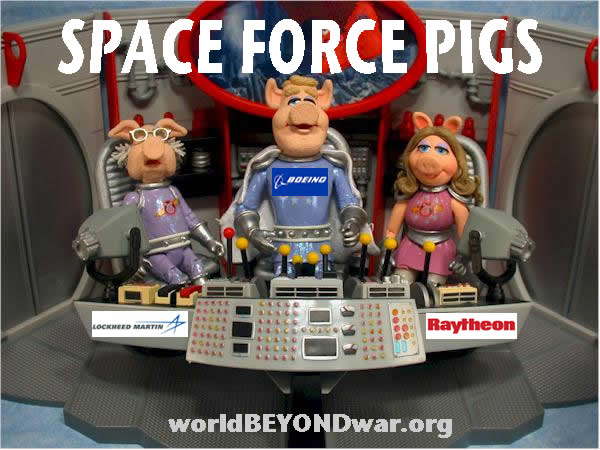 The U.S. mission to dominate and control the military use of space has been, historically and at present, a major obstacle to achieving nuclear disarmament and a peaceful path to preserve all life on earth.

Reagan rejected Gorbachev’s offer to give up Star Wars as a condition for both countries to eliminate all their nuclear weapons when the wall came down and Gorbachev released all of Eastern Europe from Soviet occupation, miraculously, without a shot.

Bush and Obama blocked any discussion in 2008 and 2014 on Russian and Chinese proposals for a space weapons ban in the consensus-bound Committee for Disarmament in Geneva where those countries tabled a draft treaty for consideration.

After enacting a treaty in 1967 to prevent the placement of weapons of mass destruction in outer space, each year since the 1980s the UN has considered a resolution for the Prevention of an Arms Race in Outer Space (PAROS) to prevent ANY weaponization of space, which the United States consistently votes against.

Clinton refused Putin’s offer to each cut their massive nuclear arsenals to 1,000 bombs and call all the others to the table to negotiate for their elimination, provided the United States stopped developing missile sites in Romania.

Bush Jr. walked out of the 1972 Anti-Ballistic Missile Treaty and put the new missile base in Romania with another opened under Trump in Poland, right in Russia’s backyard.

At this unique time in history when it is imperative that nations of the world join in cooperation to share resources to end the global plague assaulting its inhabitants and to avoid catastrophic climate destruction or earth-shattering nuclear devastation, we are instead squandering our treasure and intellectual capacity on weapons and space warfare.

There seems to be a crack in the phalanx of the U.S. military-industrial-congressional-academic-media-complex’s opposition to making space a place for peace.  John Fairlamb, retired Army colonel who formulated and implemented national security strategies and policies at the U.S. State Department and as the political-military affairs adviser for a major Army command, has just issued a clarion call to reverse course! Titled, The US Should Negotiate a Ban on Basing Weapons in Space, Fairlamb argues that:

“If the U.S. and other nations continue the current drift toward organizing and equipping to wage war in space, Russia, China and others will strive to improve capabilities to destroy U.S. space assets. Over time, this would greatly increase the threat to the full array of U.S. space-based capabilities. Intelligence, communications, surveillance, targeting and navigation assets already based in space, upon which the Department of Defense (DOD) depends for command and control of military operations, increasingly would be at significant risk. As a consequence, weaponizing space could become a classic case of trying to solve one problem while creating a much worse problem.”

“[T]he Obama administration opposed a 2008 Russian and Chinese proposal to ban all weapons in space because it was unverifiable, contained no prohibition on developing and stockpiling space arms, and did not address ground-based space weapons such as direct ascent anti-satellite missiles.

“Instead of just criticizing others’ proposals, the U.S. should join in the effort and do the hard work of crafting a space arms control agreement that deals with the concerns we have and that can be verified. A legally binding international treaty banning the basing of weapons in space should be the objective.”

Let us hope that people of good will can make this happen!