The “Fall” of Kabul Marks a Victory for Peace 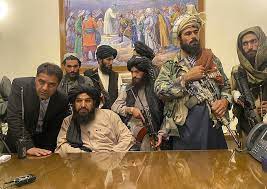 In the US media, the unfolding drama in Afghanistan has largely focused on the Pentagon’s failure to prevail and questions about President Biden’s failure to respond. Did the US “cut-and-run,” abandoning an ally to a band of bloody religious fanatics? Did Biden embarrass the nation with a haphazard retreat that invited comparison to America’s humiliating departure from Saigon?

But there is a larger question that deserves attention. What lies behind the extraordinary combat-free conclusion to Afghanistan’s 20 years of superpower occupation?

Instead of ending in the usual prolonged exchange of gunfire and airstrikes that can kill thousands and reduce entire cities to rubble, we have just witnessed what may be the largest nonviolent transfer of power in the history of conflict.

The US had plans to bomb the advancing Taliban forces but failed to do so — most likely because of the unanticipated rapid advance of the Taliban fighters.

And, in Kabul — as happened in village after town after city across Afghanistan — members of the government’s 300,000 “well-trained and well-armed” military and police forces dropped their weapons, shed their uniforms, and fled from the advance of 30,000 rag-tag rebels.

The Afghan armed forces had received the best training and equipment the Pentagon had to offer but when putsch came to shove, they refused to fight.

This unprecedented mass-surrender — and refusal to engage in combat —demonstrated the power and potential of pacifism. Instead of triggering a siege of the capitol that could have led to the deaths of tens of thousands of innocent civilians, the Afghan soldiers and police threw down their US-made assault rifles and melted away.

The Pentagon would be well-advised to consider the implications of this historic demonstration of anti-war resistance. Apparently this is what happens when a government is widely viewed as illegitimate and not deserving of the kind of loyalty that requires risking one’s life.

The problem has been explored by Gregory Gause, professor of international affairs at Texas A&M University’s Bush School of Government and Public Service. According to Gause: “Collapse is geometric. Once units see that other units have collapsed and that nothing is being done to try to stem the enemy tide, they tend to give up pretty quickly. A fighting retreat might be the most difficult thing an army has to do. Moreover, if the government for which the army is fighting does not have the support of the army, the incentives to fight are reduced even more. This is clearly the case in Afghanistan.”

In Politico essay, Anatol Lieven (a senior fellow at the Quincy Institute for Responsible Statecraft) notes how local Afghan culture works to undermine monolithic institutions by relying on situational “arrangements — in which opposing factions agree not to fight, or even to trade soldiers in exchange for safe passage.” These cultural accommodations “are critical to understanding why the Afghan army today has collapsed so quickly (and, for the most part, without violence).”

Meanwhile, on the Streets of Kabul

While most of the Western media trained its lenses on the human tide that overwhelmed the tarmac at the Kabul airport, the situation inside Kabul offered some striking revelations.

While there were massive traffic jams in the streets — as Kabul’s residents attempted to evacuate a potential war-zone — other images were surprisingly hopeful. For one, there was the Taliban’s arrival in the capital. Instead of storming the city with tanks, assault rifles, and rocket-propelled grenades, the Taliban rolled into Kabul riding motor-scooters, driving pickup trucks, and sitting atop vans.

While driving through the streets of Kabul, CNN correspondent Clarissa Ward encountered Taliban fighters passing in commandeered police cars and taxicabs, smiling and waving at her camera crew.

“Taliban fighters have flooded the capitol,” Ward reported, “Smiling and victorious, they took this city of six million in a matter of hours, barely firing a shot.”

In that first, chaotic day, the only victims of gun violence appear to have been Afghan civilians shot by US soldiers during the frenzied storming of Kabul’s international airport. Al-Jaseera journalist Ali Hashem posted a video on Twitter showing the bodies of several Afghan civilians — male and female — sprawled on the ground. Hashem reported: “Apparently there are casualties at Kabul international after US troops fired shots on desperate crowds who sought to flee the country on the last flights.” (Another video posted on Twitter appeared to show a group of US soldiers crouching behind sandbags and opening fire on the crowd.)

Back in the city, a group of Taliban (many armed with US-made weapons) gathered outside the abandoned US Embassy building, mingling with civilians and posing for photos. One young Taliban member assured the crowd that “Everything is fine: everything is under control.”

Some reporters noted that the arrival of the Taliban was followed by the removal of US humvees that had been stationed along major streets. Others observed that some shops remained open until midnight. (Apparently, with the Taliban finally occupying Kabul, there was no longer a fear of suicide bombers and other disruptions.)

Asked if he had a message for America, one Taliban fighter told Ward: “America has already spent enough time in Afghanistan. They need to leave. They already lost lots of lives and lots of money.”

What Does the Future Hold?

Unfortunately, as Ward pointed out, “That is clearly open for interpretation.” When Ward visited a nearby classroom filled with young girls, the teacher explained they would only receive “religious education.” They would not attend regular schools.

Despite the Taliban’s assurances that their take-over of the country and the capitol would bring peace and stability, Ward spoke of the fears of professional women “who have been outspoken, who have prominent jobs, women in politics, women in the judiciary, journalists … [who] are, right now, absolutely petrified, waiting to see what happens.” Ward summed up the situation with the observation that “today you see many more burqas on the street and fewer women.”