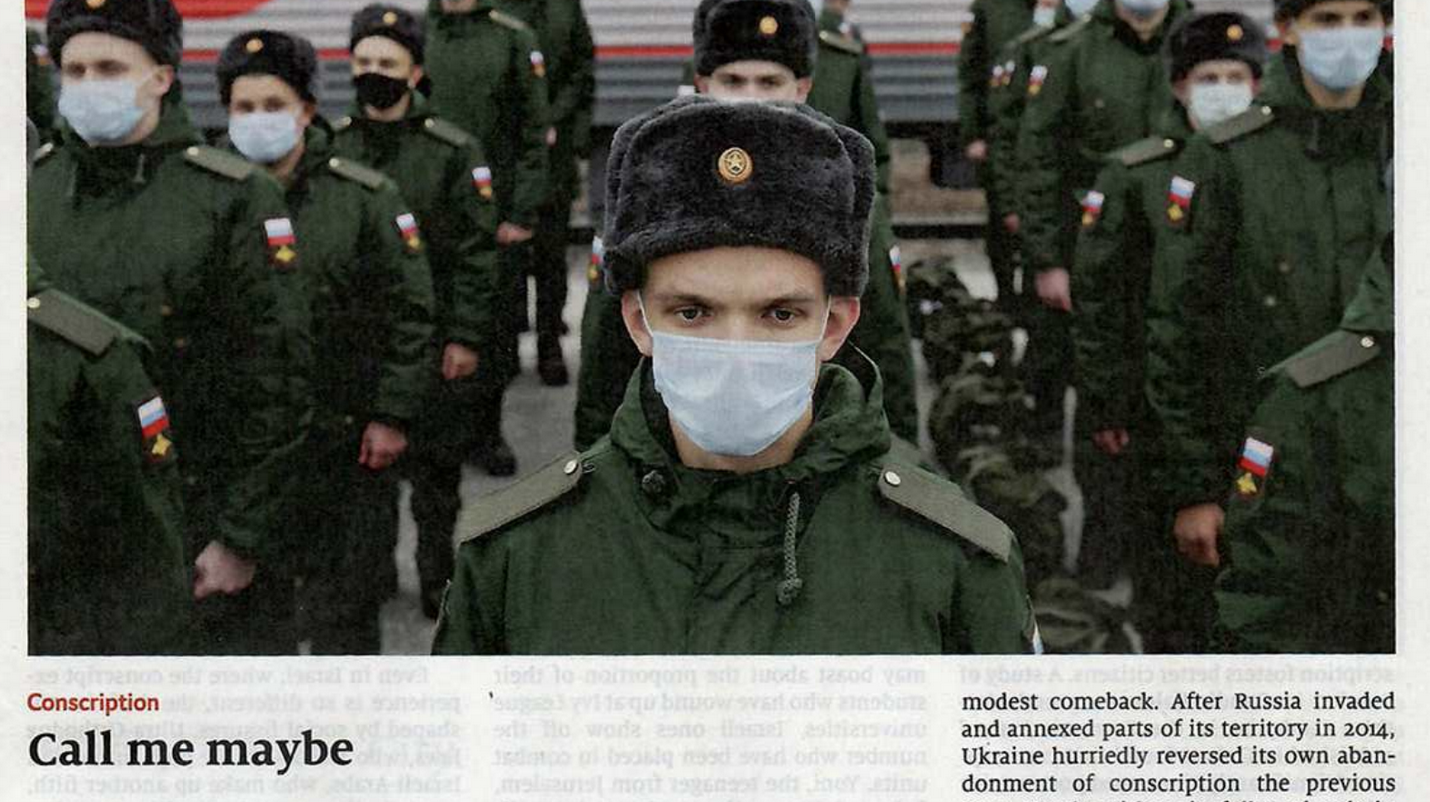 Prominent London-based international magazine “The Economist” published an article entitled “Call me maybe” (on their website, “The military draft is making a comeback”).

The article is propaganda on the “benefits” of conscription, based on the example of Israel and North European countries, though some disadvantages of conscription such as rising crime rate are mentioned. The article is anonymous (probably editorial, but why not on the first page?) and written in Israel, geotagged “Tel Aviv.” Its messages are contradictory and controversial, like, conscription in Russia is hell but conscription in the West is heaven.

In the article, anonymous author(s) boast about Israeli youths’ readiness to serve in the worst recruiting-propaganda manner, but ignore the fact that sixty teenagers from Israel published an open letter declaring their refusal to serve in the army protesting against the policies of occupation of Palestine (the “Shministim Letter”). Author(s) troll War Resisters’ International (WRI) a-la you should stop protesting against conscription because there is no conscription almost anywhere, and then paradoxically start advertising the gradual return of conscription worldwide. Mention of the WRI may be a form of revenge for their campaign of solidarity with Israeli objectors.

The article ignores human rights dimensions, the right to conscientious objection to military service, and the democratic tradition of personal conscience as safeguard from mass madness of war, and underplays the trend of militarizing economies and societies (even in United States military registration for women is introduced by the National Defense Authorization Act for Fiscal Year 2022).

The argument for conscription as a precaution against war is ridiculous; the institution of conscription turns democratic free-market economies into authoritarian slavery-based economies (everyone can be conscripted as a slave if they refuse to serve the war machine voluntarily). We don’t need more conscription, we need three simple things: demilitarization of economies, nonviolent conflict resolution, and strengthening peace culture in societies.

Another presented idea beyond the limits of sanity is “inoculation” of youth from far right extremism via throwing teens into the claws of neo-fascist officers. Both ideas are so mad that the article “balanced” (I am sure, by suggestion of editor against author’s will) obvious bullshit with some simple facts which should go first instead of “seriously considering” such bullshit. And the “indignity of high school” passage is barking mad.

Meanwhile, an article in Roar Magazine shows links between Israeli and EU militarisation.

Israeli’s archaic politics and militarized economy is in no way a model for the world, as The Economist suggests, if our goal is sustainable development, not war of all against all. Israel should respect the human right to refuse to kill, and countries considering conscription as a wonder pill against economic crisis should reconsider; these pills are poisonous. The mission of our antimilitarist organizations is to abolish the immoral institution of war, and it will not be abandoned.

Wish you peace and happiness.