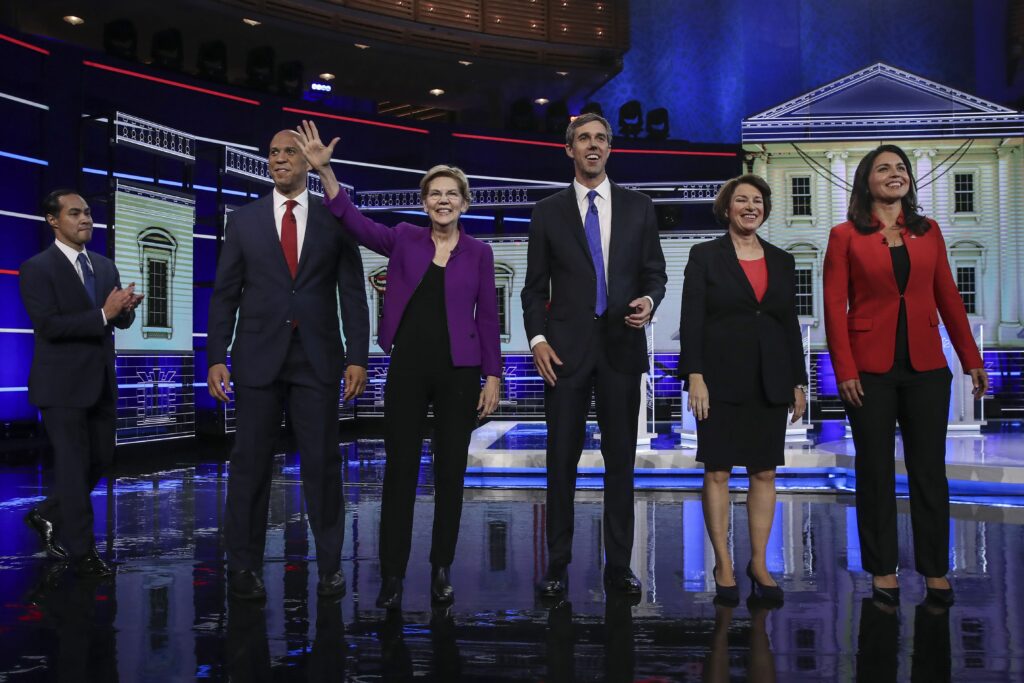 From the Boston Globe

If you’re looking for bold ideas about America’s future role in the world, don’t tune in to this week’s debates among Democratic presidential candidates. The first round of debates made clear that moderators will not ask deep questions about foreign policy. That’s fine with most candidates, who don’t want to address such questions. Viewers are left with little more than dreary repetition of cliches and ritualistic denunciation of supposed enemies.

This debate season reflects a depressing fact of American political life. In the United States, it is possible to spend many years in politics and rise to high positions without ever thinking seriously about foreign policy. This self-imposed ignorance would be lamentable in any country. In the United States it is especially dangerous. Actions that we take affect not only our own security but the daily lives of human beings around the world. Millions thrive or suffer depending on what Congress, the White House, and the Pentagon decide from one day to the next. So what should they decide? How should the United States deal with the rest of the world? Even when we are selecting our next president, we rarely ask these literally earth-shaking questions.

Candidates are part of the problem. The only one who is focused mainly on foreign policy, Tulsi Gabbard, has struggled to break into voters’ consciousness. Most of the others mouth hoary foreign policy nostrums but clearly have no deeply considered view of the world. Elizabeth Warren is a sterling example of this blind spot. She evidently has a sharper and more analytical mind than most of her rivals, but does not appear to have applied it to foreign policy. She is known, for example, as a reflexive supporter of Israel, and even applauded Israel’s 2014 invasion and occupation of Gaza. Yet a few weeks ago she was pressed by a voter to support ending that occupation and replied, “Yes, yes, so I’m there.”

That sounded like a reversal. Was it? Don’t expect to find out by watching the debate.

The only top-tier presidential candidate who seems eager to talk about foreign policy is also the only one with a consistent view: Bernie Sanders. He steadfastly opposes American military intervention and regime-change projects, and promises to end our foreign wars. Agree with him or not, it’s clear that Sanders has reflected seriously on global questions and has developed a consistent view of what American foreign policy should be.

No matter how ignorant most candidates are of foreign policy, or how eagerly they seek to avoid discussing it, they are not the real culprits in these debates. The greater problem is the moderators. Networks choose moderators who instinctively embrace the idea of American hegemony and willingly serve as ventriloquists’ dummies for our permanent-war machine. Candidates do not give revealing answers to provocative questions about world affairs because moderators do not ask such questions.

What would those questions be? Here are some obvious ones that, if asked, might help voters learn what candidates really think about the world and America’s place in it.

■  President Jimmy Carter has asserted that the United States is “the most warlike nation in the history of the world.” Is that true? If not, why do so many people around the world believe it?

■ Our war in Afghanistan has become the longest in American history. Will you pledge to withdraw all American troops by the end of your first term?

■ The United States has imposed new sanctions on Iran and Venezuela that are causing great pain to ordinary people. Is it right for the United States to make families suffer in order to achieve a political goal?

■ How can we avoid conflict with China?

■ The nearly 2 million citizens of Gaza live under the world’s harshest occupation, without freedom to travel, develop their economy, or speak freely. Israel claims that security requires it to continue this occupation. Is it justified, or should the occupation end?

■ The United States maintains nearly 800 foreign military bases. Britain, France, and Russia have a total of about 30. China has one. Does the US need 25 times more foreign bases than these other powers combined, or could we cut the number in half?

■ If we believe that the government of another country is brutalizing its people and acting against American interests, should we seek to weaken or overthrow that government?

■ Would you end military maneuvers near Russia’s borders and seek ways to cooperate, or is Russia our irreconcilable enemy?

■ Our military forces now control one-third of Syria, including much of its arable land and energy resources. Should we continue this occupation, or withdraw and allow the reunification of Syria?

■ Is it possible to pay for national health insurance and other sweeping programs that most Democrats support without major cuts in our military budget?

These questions all lead to the most profound theme of all, one that is all but taboo in American politics: peace. In our modern age, not a day passes without the United States threatening, denouncing, sanctioning, attacking, bombing, or occupying some foreign country. Confrontation and conflict shape our approach to the world. That makes these the most important questions to ask anyone running for president of the United States: Is eternal war our destiny? Is peace possible? If so, what will you do to bring it closer?

Stephen Kinzer is a senior fellow at the Watson Institute for International and Public Affairs at Brown University.