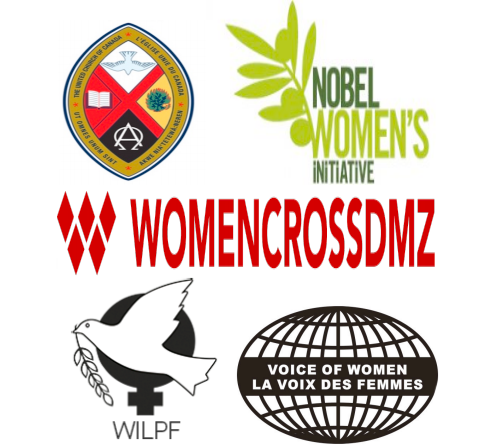 As sixteen delegates representing peace movements from all over the world, we have traveled from Asia, Pacific, Europe, and North America to convene the Vancouver Women’s Forum on Peace and Security on the Korean Peninsula, an event held in solidarity with Canada’s Feminist Foreign Policy to promote a peaceful resolution to the crisis on the Korean Peninsula. Sanctions and isolation have failed to curb North Korea’s nuclear weapons program and instead severely harm the North Korean civilian population. A Korean Peninsula free of nuclear weapons will only be achieved through genuine engagement, constructive dialogue, and mutual cooperation. We issue the following recommendations to the Foreign Ministers participating in the January 16 Summit on Security and Stability in the Korean Peninsula:

These recommendations are based on our long experience engaging with North Koreans through citizen diplomacy and humanitarian initiatives, and from our collective expertise on militarism, nuclear disarmament, economic sanctions, and the human cost of the unresolved Korean War. The Summit is a sobering reminder that the gathered nations have a historic and moral responsibility to formally end the Korean War. A pledge not to conduct a first strike can de-escalate tensions by significantly reducing the apprehension of an attack and the risk of miscalculation that could result in an intentional or an inadvertent nuclear launch. Resolving the Korean War can be the single most effective action to halt the intense militarization of Northeast Asia, which gravely threatens the peace and security of 1.5 billion people in the region. The peaceful resolution of the Korean nuclear crisis is the key step toward the total global elimination of nuclear weapons. 2

BACKGROUND ON RECOMMENDATIONS TO FOREIGN MINISTERS

2018 marks the 65th anniversary of the Armistice Agreement, a ceasefire signed by military commanders from the DPRK, PRC, and US on behalf of the US-led UN Command.1 Bringing together representatives of the nations that sent arms, troops, doctors, nurses and medical aid to the US-led military coalition during the Korean War, the Vancouver Summit presents an opportunity to make a collective effort in support of realizing a peace agreement, to fulfill the pledge stated under Article IV of the Armistice. On July 27, 1953, sixteen Foreign Ministers signed an addendum to the Armistice affirming: “We will support the efforts of the United Nations to bring about an equitable settlement in Korea based on the principles which have long been established by the United Nations, and which call for a united, independent and democratic Korea.” The Vancouver Summit is an opportune but sobering reminder that the gathered nations have a historic and moral responsibility to formally end the Korean War.

A pledge not to conduct a first strike would further de-escalate tensions by significantly reducing the risk of escalation or miscalculation that could result in an intentional or an inadvertent nuclear launch. As signatories to the UN Charter, member states are required to settle disputes by peaceful means.2 Moreover, a pre-emptive military strike on North Korea, however limited, would almost certainly trigger a massive counter-strike and result in a full-scale conventional or nuclear war on the Korean Peninsula. The U.S. Congressional Research Service estimates that, in just the first few hours of combat, as many as 300,000 would be killed. In addition, the lives of tens of millions of people would be at risk on both sides of the Korean divide, and hundreds of millions more would be directly impacted throughout the region and beyond.

Resolving the Korean War can be the single most effective action to halt the intense militarization of Northeast Asia,3 which gravely threatens the peace and security of 1.5 billion people in the region. The massive military buildup has negatively impacted the lives of the people living near U.S. military bases, in Okinawa, Japan, the Philippines, South Korea, Guam and Hawaii. The dignity, human rights, and collective right to self-determination of peoples in these countries have been violated by militarization. Their lands and seas which they depend upon for their livelihoods and which carry cultural and historical significance, are controlled by the military and contaminated by military operations. Sexual violence is committed by military personnel against host communities, especially women and girls, and the belief in the use of force to solve disputes is deeply instilled to maintain patriarchal inequalities that shape societies throughout the world.

Foreign Ministers must address the impact of increased UNSC and bilateral sanctions against the DPRK, which have grown in number and severity. While advocates of sanctions regard them as a peaceful alternative to military action, sanctions have a violent and catastrophic impact on the population, as evidenced by sanctions against Iraq in the 1990s, which led to the premature deaths of hundreds of thousands of Iraqi children.4 The UNSC insists that UN sanctions against North Korea are not targeted at the civilian population,5 yet evidence suggests to the contrary. According to the 2017 UNICEF report, 28 percent of all children aged five and under suffer from moderate to severe stunting.6 While UNSC Resolution 2375 recognises the “great unmet needs” of the citizens of the DPRK, it places responsibility for these unmet needs solely with the DPRK government and makes no mention of the potential or actual impact of the sanctions themselves.

Increasingly, these sanctions are targeting the civilian economy in the DPRK and are therefore likely to have further negative impacts on human livelihood. For example, bans on textile exports and on the dispatch of workers abroad are all significantly affecting the means whereby ordinary DPRK citizens typically earn the resources to support their livelihood. Furthermore, recent measures aimed at restricting the DPRK’s import of oil products risk further negative humanitarian impacts.

According to David von Hippel and Peter Hayes,: “The immediate primary impacts of responses to oil and oil products cut-offs will be on welfare; people will be forced to walk or not move at all, and to push buses instead of riding in them. There will be less light in households due to less kerosene, and less onsite power generation. There will be more deforestation to produce biomass and charcoal used in gasifiers to run trucks, leading to more erosion, floods, less food crops, and more famine. There will be less diesel fuel to pump water to irrigate rice paddies, to process crops into foodstuffs, to transport food and other household necessities, and to transport agricultural products to markets before they spoil.”7 In his letter, the UN Humanitarian Resident Coordinator for North Korea cites 42 examples where sanctions have hampered humanitarian work,8 which was recently affirmed by Sweden’s UN ambassador.9 The UN, international organisations, and NGOs in the DPRK have for several years faced increased operational difficulties, such as the absence of international banking systems through which to transfer operational funds. They have also faced delays to or prohibitions against the provision of essential medical equipment and pharmaceutical products, as well hardware for farming and water-supply systems.

The success of sanctions against the DPRK look dim given the fact that the opening of dialogue between the US and North Korea is conditional upon the DPRK’s commitment to denuclearization. This precondition does not address the underlying causes of the DPRK’s nuclear program, namely the unresolved nature of the Korean War and the continued and rising geopolitical tensions in the region, which long predate the DPRK’s nuclear program and can in part be regarded as a key motivation for it to acquire nuclear capability. Instead, we call for engaged diplomacy, including actual dialogue, normalized relations, and the start of cooperative, trust-building measures that have the potential to create and sustain a stable political environment for reciprocal and beneficial ties in the region and for the prevention and early resolution of possible conflict.

The review, spanning three decades of forty peace processes, shows that of 182 signed peace accords, an agreement was reached in all but one case when women’s groups influenced the peace process. The ministerial meeting follows the launch of Canada’s National Action Plan on UNSCR 1325, demonstrating a commitment to the inclusion of women at all stages of the peace process. This meeting is an opportunity for all governments to ensure women’s participation on both sides of the table. Those countries present at the Summit with a Feminist Foreign Policy must allocate funding to women’s organizations and movements to further their capacity for participation.

WHY WE NEED A PEACE AGREEMENT TO END THE KOREAN WAR

2018 marks seventy years since the proclamation of two separate Korean states, the Republic of Korea (ROK) in the south and the Democratic People’s Republic of Korea (DPRK) in the north. Korea had been denied sovereignty after liberation from Japan, its colonial oppressor, and was instead arbitrarily divided by Cold War powers. Hostilities erupted between the competing Korean governments, and the intervention of foreign armies internationalized the Korean War. After three years of war, more than three million dead, and the complete destruction of the Korean Peninsula, a ceasefire was signed, but never turned into a peace agreement, as promised by the signatories to the Armistice Agreement. As women from nations that participated in the Korean War, we believe sixty-five years is far too long for a ceasefire. The absence of a peace agreement has arrested progress on democracy, human rights, development, and the reunion of Korean families tragically separated for three generations.

1 As a point of historical correction, the UN Command is not a United Nations entity, but a military coalition led by the United States. On July 7, 1950, United Nations Security Council Resolution 84 recommended members providing military and other assistance to South Korea “make sure forces and other assistance available to a unified command under the United States.” The following nations sent troops to join the U.S.-led military coalition: the British Commonwealth, Australia, Belgium, Canada, Colombia, Ethiopia, France, Greece, Luxembourg, the Netherlands, New Zealand, the Philippines, Thailand and Turkey. South Africa provided air units. Denmark, India, Norway and Sweden provided medical units. Italy supported a hospital. In 1994, UN Secretary-General Boutros Boutros-Ghali clarified, “the Security Council did not establish the unified command as a subsidiary organ under its control, but merely recommended the creation of such a command, specifying that it be under the authority of the United States. Therefore, the dissolution of the unified command does not fall within the responsibility of any United Nations organ but is a matter within the competence of the Government of the United States.”

2 The Charter prohibits the threat or use of force except in cases where it was properly authorized by a Security Council resolution or in cases of necessary and proportional self defense. Pre-emptive self defense is only lawful when faced with truly imminent threats, when the necessity of self defense is “instant, overwhelming, leaving no choice of means, and no moment of deliberation” according to the seminal Caroline formula. It would accordingly be a violation of customary international law to attack North Korea as long as it does not attack itself and as long as there are still diplomatic avenues to be pursued.

5 UNSC 2375“… are not intended to have adverse humanitarian consequences for the civilian population of the DPRK or to affect negatively or restrict those activities, including economic activities and cooperation, food aid and humanitarian assistance, that are not prohibited (……) and the work of international and non-governmental organizations carrying out assistance and relief activities in the DPRK for the benefit of the civilian population of the DPRK.”

6 UNICEF “The State of the World’s Children 2017.” https://www.unicef.org/publications/files/SOWC_2017_ENG_WEB.pdf

9 Concerns about the negative humanitarian effects of the sanctions were raised by Sweden’s Ambassador to the UNSC in an emergency meeting in December 2017: “The measures adopted by the council were never intended to have a negative effect on humanitarian assistance, therefore recent reports that the sanctions are having adverse conseq