Space: The next battlefield?

By Alice Slater, Opinion Contributor — August 20, 2018, The Hill.
The views expressed by contributors are their own and not the view of The Hill 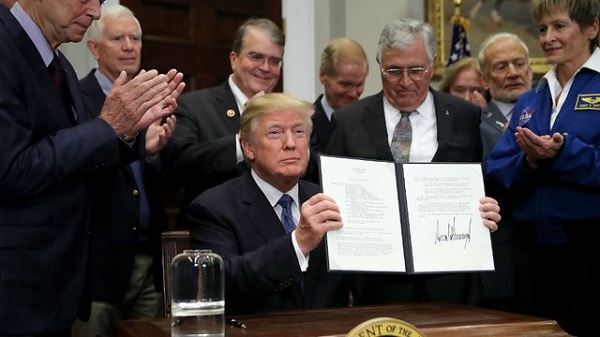 Last week, Vice-President Mike Pence announced the Trump administration’s plan for a new military command, the US Space Force, emphasizing President Donald Trumps’s urging that “It is not enough to merely have an American presence in space: we must have American dominance in space.” Pence’s announcement was greeted by Trump, tweeting in response, “Space Force all the way!”

Pence’s rationale for this disturbing expansion of US militarization to the heavens is that “our adversaries”, Russia and China, “have been working to bring new weapons of war into space itself” that pose a threat to American satellites.  But despite a virtual blackout in the mainstream media, Russia and China have been arguing for years in the halls of the United Nations that the world needs a treaty to prevent stationing such weapons in outer space in order to maintain global “strategic stability” among the major powers and enable nuclear disarmament. Although the Outer Space Treaty of 1967 prevented the placement of weapons of mass destruction in outer space, it never prohibited conventional weapons in space. In 2008 and again in 2014, Russia and China introduced a draft Treaty on the Prevention of the Placement of Weapons in Outer Space in the UN forum that negotiates disarmament agreements, the Committee on Disarmament in Geneva. The U.S. has blocked any discussion of the space weapons ban treaty in the consensus-bound forum, where all talks are stalled because of U.S. repeated vetoes. After years of inaction, we now learn that Russia and China are believed to be developing the ability to shoot down satellites in space.

We reach this point after a sad history of missed opportunities for peace in space and nuclear disarmament. It began with President Truman’s rejection of Stalin’s proposal to place the bomb under international control at the United Nations in 1946. Then President Reagan rejected former Soviet President Mikhail Gorbachev’s offer to eliminate nuclear weapons, provided the U.S. didn’t proceed with his plan for Star Wars, a space-based military system, later described in 1997 under the Clinton administration, as the US Space Command’s Vision 2020, proclaiming its mission to “dominate and control the military use of space to protect U.S. interests and investments.” Clinton rejected Putin’s offer to reduce our massive nuclear arsenals of some 15,000 bombs each to 1,000 and then call on all the other nuclear weapons states to negotiate for their abolition, conditioned on the U.S. halting its plans to put anti-missile systems in Eastern Europe. President George W. Bush, relying on his policy to include missile defense and space-based weapons to destroy targets anywhere in the world swiftly for “full spectrum dominance,” walked out of the 1972 Anti-Ballistic Missile treaty that the U.S. had negotiated with the Soviet Union and now there are U.S. missiles in Romania and others planned for installation in Poland. Further, President Obama rejected Putin’s offer in 2006, in light of a new kind of arms race with potentially dangerous consequences, to negotiate an international treaty to ban cyber attacks.